Christmas is almost here! And with Christmas comes rabid consumerism and the irresistible compulsion to go deeply into debt at least until the following Christmas, when you will go deeply into debt some more. Smart inventors know that Christmas products sell, so this time of year is a time of great innovation, clever inventions and seriously creepy Santa Claus drones. Just for fun, let us look at some more clever and weird patents designed just for the December holiday.

Nothing destroys Christmas faster than when your tree bursts into flames. Do not laugh — between 2013 and 2017, 160 fires in the United States started with a Christmas tree. These holiday-wrecking arsonists tend to combust when they are not freshly cut, are not watered enough, and decide they are tired of being covered with humiliating leg lamp ornaments.

Fire safety experts say the answer is to buy a freshly cut tree and keep it watered, avoid leg lamp ornaments and use UL tested lights. On the other hand, you could play it safe and purchase an "automatic fire extinguishing system for an existing Christmas tree and associated method" (US patent 7,963,343). The device includes "an air-pressurized reservoir containing fire-retardant agent and a mechanism for automatically discharging the fire retardant agent." This should free you from the responsibility of having to make smart fire-safety choices when decorating (just kidding, please always make smart fire-safety choices when decorating). 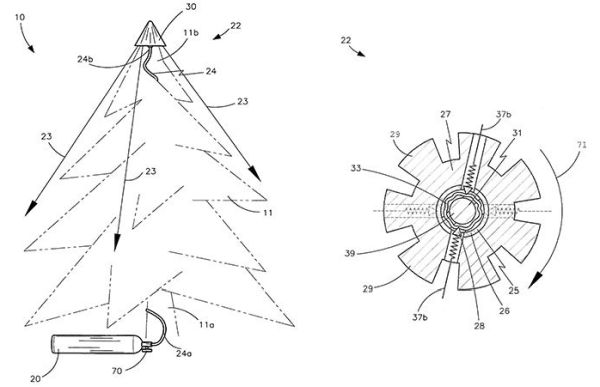 Do you remember that long, stringy, silver stuff your mom or grandma used to buy to simulate icicles on your Christmas tree? It was called "tinsel," and it could kill your cat. Tinsel was big in the 70s, and you can still buy the stuff if you are feeling nostalgic and you do not like your cat very much. However, one thing you cannot get is a gun that you can use to shoot tinsel at your tree (and your cat), even though back in 1970, someone filed a patent for just such a device.

US patent 3,494,235 describes "Devices for dispensing tinsel and the like adaptable for decorating Christmas trees" (no one is sure what "the like" is). "The frame of the device may be in the form of a gun. Upon pressing the trigger, tinsel is discharged through the muzzle from off a supply roll mounted on the stock." Now, if you remember how tangled this stuff used to get when you were putting it on by hand, you can imagine how awful your tree would look after firing tinsel at it from a tinsel-dispensing gun. Still, you will at least have fun turning your tree into gobs of feline-killing plastic waste products. 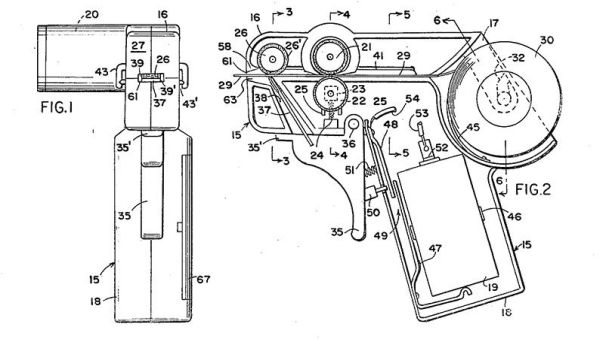 "Devices for dispensing tinsel and the like adaptable for decorating Christmas trees", US patent 3,494,235 issued on February 10, 1970. An object of this invention was to "provide a novel and improved dispensing device to be held in hand and manipulated to issue forth any desired length of tinsel and the like, from off a supply roll." (Source: USPTO Patent Full-Text Database)

The "Naughty or Nice" meter

Christmas is a time of giving, family togetherness and threatening your kids to make them behave. To that end, US patent 2008/0299533 is a device designed "to let children know where they stand on a "Naughty or Nice Meter." Feeling sad that you cannot use this thing all year long? Do not worry because it "has widespread applications and can be used for other seasons of the year or events."

In other words, this thing can tell you when your kid is secretly pulling on the dog's tail or playing video games in the middle of the night, right? No, it is just a grading scale that helps you determine how naughty or nice your kid is based on the answers to a series of 12 questions. Also, it has a calculator. Suddenly, the spying Santa drone is starting to sound like a decent idea. 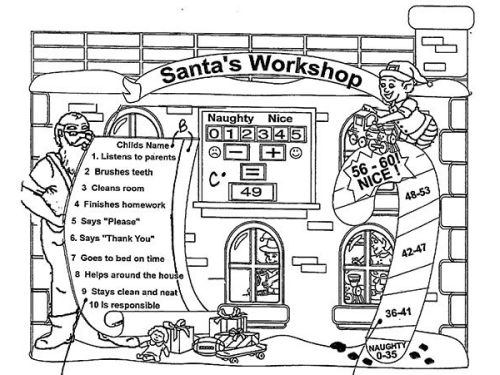 "Naughty or nice meter", US patent 2008/0299533 issued on December 4, 2008. As described above, the device lets you know where your children stand on a "naughty or nice meter" by asking 12 behavioral questions. (Source: USPTO Patent Full-Text Database)

Therefore, you did not ruin Christmas by burning down your tree, killing the cat or keeping your kids in line by calculating their misdeeds on a festive holiday adding machine. How about scaring the jolly old elf away with US patent 5,523,741, a "Santa detector," which is "a children's novelty device for detecting when an entity enters a dwelling." Probably everyone would like a fair warning when an "entity" enters their dwelling, but frankly, that sounds more like the description of a ghost-hunting device than a Santa detector.

If you read past that, though, and through the four paragraphs explaining who Santa is and why children like him, it becomes clear that the detector is just a stocking that lights up when a cord is pulled, thus "signal[ing] the arrival of Santa Claus." So much for stealth, Santa. Well, Santa's pretty light on his feet, so maybe he can still get out fast enough to avoid being ratted out. 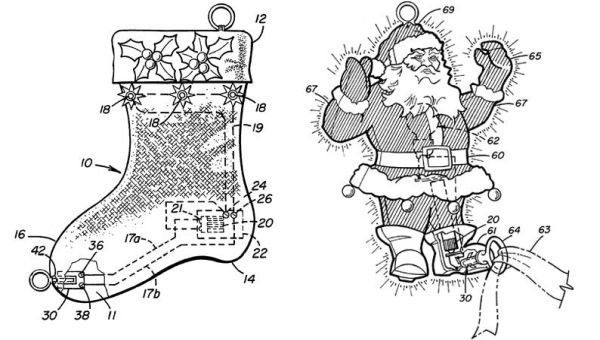 "Santa Claus Detector", US Patent No. 5,523,741 issued on June 4, 1996. The device comprises a Christmas stocking "having illumination means associated therewith for signalling the arrival of Santa Claus." (Source: Google Patents)

Santa in a tub

Here's an especially inappropriate holiday patent: A "Santa Claus figure in a tub," which you can't ever, ever unsee, so trust us when we say you should avoid doing any patent searches in the hope of finding this one. US patent number 372,207 is a 1996 invention, which is a Santa figurine lying in a bathtub with a Santa hat-clad rubber ducky. The figurine is brushing his beard and staring off into the distance as if daydreaming about a time when he doesn't have to visit 75 million homes in one night even though at least 4/5ths of the kids he's delivering gifts to were likely failures on the "naughty or nice" meter. Perhaps he is just wishing that there was not a drawing of him lying naked in a tub immortalized forever in the US patent database. Maybe drop a scarf on that one when the grandkids come to visit. 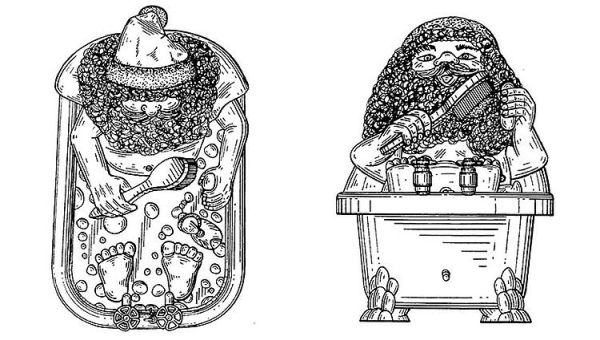 These are some especially silly examples, but remember that Christmas patents helped make the holiday what it is today. Where would we be without icicle lights, illuminated wreaths and stockings shaped like upside-down decapitated dog heads? Our patent system has guaranteed that our holidays will always be merry and bright and sometimes a little wonderfully weird.