On April 12th, the Federal Circuit, in a per curiam order, denied SHzoom's motion to make the Trading Technologies opinion precedential.   The order of course gave no reasons for the decision.   Even so, the underlying decision is still a good one for patentees and applicants.

While not binding on the USPTO, it can nonetheless be argued as persuasive authority to examiners where the facts in the application "uniquely match" those in the case.  Prosecutors should consider arguing this case to examiners where they have specifically claimed graphical elements that provide specific functionality.

The case is noteworthy because it is the first true "business method" patent that the Federal Circuit has upheld.  The claims of the patents specifically recited steps for placing trade orders in electronic exchanges. Claim 1 of Trading Technologies' US 6,766,304 is shown here as example: 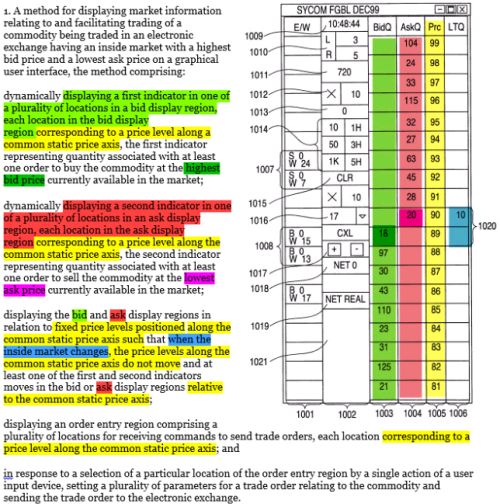 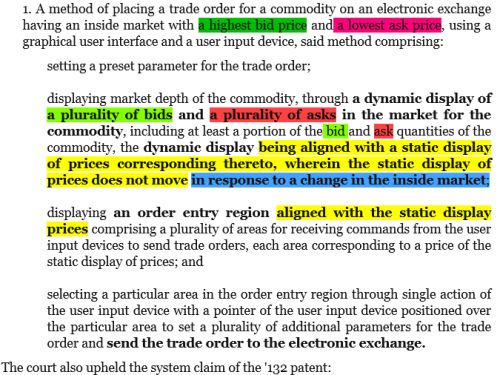 a user input device for positioning a pointer thereof over an area in the order entry region; and

All of these claims unquestionably relate to (though they are not "directed to") the "business method" of trading commodities---or whatever other level of abstraction you fancy.  Nonetheless, both the district court and the Federal Circuit looked past that characterization to the underlying technology claimed, the detailed graphical structures with corresponding functions.  The core rationale that is used by both courts is that user interfaces are a form of technology, not abstract ideas.

First, the district court was not taken in by the fact that humans have been trading commodities in "open outcry" trading floors, stating that  the "claims similarly do not "recite a fundamental economic or longstanding commercial practice," because "as electronic trading has only been viable for a couple of decades, and its analog predecessor, open outcry trading systems, operate in a significantly different fashion."  Instead "the claims at issue in both patents profess to solve problems of prior graphical user interface devices (GUIs), in the context of computerized trading, relating to speed, accuracy and usability."   The district court also rejected the overly broad characterization of the claims offered by CQG:

CQG argues that: "[t]he Asserted Claims recite the abstract idea of placing an order for a commodity on an electronic exchange, based on observed market information, as well as updating the market information....If the claims simply provided for "setting, displaying, and selecting" data or information, CQG would be correct in its assessment that the claims are directed to an abstract idea. However, CQG ignores much of the details of the representative claims. Neither the claims of the '304 patent nor the claims of the '132 patent are directed to solely "setting, displaying, and selecting" data or information that is visible on the GUI device. (emphasis added).

This statement is critically important.  CQG's approach was to extract the gerunds from each claim step--displaying, setting, selecting---and argue those in isolation as being abstract ideas.  Sound familiar?  It should: this is exactly what patent examiners do in their Section 101 rejections.  The district court and the Federal Circuit rejected this approach.

The district court also took into consideration the differences between traditional floor trading and electronic trading as relevant to whether the claims were directed to an abstract idea:

The speed, quantity and variety of trades that can be made by a single trader over an electronic system are no doubt markedly different than those trades a single trader can make in the open outcry system. This Court concludes, in part, from the apparent differences between the analog versions of trading and electronic trading that the claims of the patents in suit are not directed to the abstract idea of "placing an order for a commodity on an electronic exchange."

In other words, the actual technological context here matters, and is not be be summarily placed into the "post-solution" or mere "technological environment" dustbins that many courts use when parsing claims.

The district court further found that there was an inventive concept in the specifically claimed graphical structure.  The district court focused on the claimed "static price index" and how the order entry field was aligned with it.

Even if this Court were to find that the claims of the patents in suit are directed to an abstract idea, the second part of the Alice framework, considering the claim elements "both individually and 'as an ordered combination' to determine whether the additional elements 'transform the nature of the claim' into a patent-eligible application," leads this Court to one conclusion: the claims recite an inventive concept.

...
In searching for the "inventive concept," by analyzing the claim elements both individually and as an ordered combination, this Court need not delve further than identify the clause in the claims which has raised a flurry of commotion throughout these proceedings: the static price index. The '132 patent recites a "dynamic display being aligned with a static display of prices corresponding thereto," and the '304 patent recites "each location in the bid display region corresponding to a price level along a common static price axis." This element of the representative claims is what adds the "inventive concept" to the patents-in-suit. (emphasis in original).

In short, the district court looked at the details of the claimed graphical structure and how they provided a specific solution to a problem with previous user interfaces.

The Federal Circuit expressly endorsed the district court's approach: "The district court's rulings are in accord with precedent."  Focusing on the graphical structure and function, the Federal Circuit noted "In the patented system bid and asked prices are displayed dynamically along the static display, and the system pairs orders with the static display of prices and prevents order entry at a changed price" and that this "specific, structured graphical user interface paired with a prescribed functionality directly related to the graphical user interface's structure that is addressed to and resolves a specifically identified problem in the prior state of the art" (emphasis added).  The court squarely put such features within the realm of technology, stating "Precedent has recognized that specific technologic modifications to solve a problem or improve the functioning of a known system generally produce patent-eligible subject matter." (emphasis added).

The reference to a "known system" is subtle but important because Trading Technologies' inventions were implemented using conventional "client terminals" that could only be "generic computers" in the current parlance.  The use of generic computers is often cited by examiners (and courts) as somehow damning of the eligibility, particularly in regards to whether there is an inventive concept.  Here's a typical statement by an examiner: "Generic computer components recited as performing generic computer functions that are well-understood, routine and conventional activities amount to no more than implementing the abstract idea with a computerized system. Thus, taken alone, the additional elements do not amount to significantly more than the above-identified judicial exception (the abstract idea)."  The decision here, as well as those in McRO, AmDocs, and even DDR,  demonstrate that the fallacy of this approach.   Indeed, if taken seriously, a rule that ignores the use of "conventional"  elements in process claims would essentially wipe out Section 100(b) of the patent statute which provides that a statutory "process" includes a "new use of a known ..., machine".  Congress absolutely intended new uses of known machines (including computers which were known at the time of the 1952 Patent Act) to be patent eligible.

In prosecution then, applicants with graphical user interfaces, whether for business related inventions or otherwise, should draft claims to tie specific graphical structures (axes, fields, regions, command areas) with specific functional behavior (e.g., how the elements move, change, or are interacted with by the user).