by Gregory J. Winsky
Archer & Greiner P.C.
Your LinkedIn Connections
with the authors

A long time ago, in a galaxy far, far away... in our May 2016 Client Alert entitled " Design Patents at the Supreme Court: A Picture is Worth..." we promised to follow up on Samsung's appeal to the Supreme Court of the 2015 decision of the Federal Circuit Court of Appeals upholding a jury award to Apple of $400,000,000 in damages for infringement of three U.S. design patents.

A design patent can be awarded by the United States Patent and Trademark Office for "any new, original and ornamental design for an article of manufacture."

This week in a decision favorable to Samsung, Justice Sotomayor, writing for a unanimous eight, reversed the Federal Circuit, but declined to enunciate a test for calculating damages under § 289 of the Patent Law that provides in part:

"Whoever during the term of a patent for a design, without license of the owner...applies the patented design...to any article of manufacture for the purpose of sale ..shall be liable to the owner to the extent of his total profit."

The question brought by Samsung on appeal was: "Where [sic] a design patent is applied only to the component of a product, should an award of infringer's profits be limited to those profits attributable to the component?"

Shown below is the design covered by one of Apple's three weapons, D 618,677: 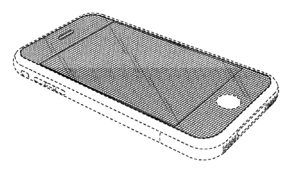 As noted in the earlier Alert, the "patented design" of that drawing includes only the parts of the design designated by solid lines; dotted lines are specifically not part of that "patented design." Justice Sotomayor acknowledged in her opinion that the patented design of the '677 Patent is merely "a black rectangular face with rounded corners." Reversing the Federal Circuit decision, she then wrote:

"[R]eading 'article of manufacture' in Section 289 to cover only an end product sold to a consumer gives too narrow a meaning to the phrase."

Samsung had argued that the trial court was wrong to use a damages calculus based on the total profit it had made on its sale of each smartphone that the jury found infringing, but the Supreme Court refused to rule whether "the relevant article of manufacture is the smartphone, or a particular smartphone component" and remanded the case to the Federal Circuit.

Since both Apple and Samsung phones are assembled (from components, some of which may be covered by one or more US design patents) by third party assemblers in Asia, query whether a fully assembled smartphone that is imported and sold to consumers in the United States is an "article of manufacture" under Section 289 (and under the similarly worded Section 171 defining patentability for designs). Consider that question in light of the distinction between a "machine" and a "manufacture" as those terms are used in Section 101 of the Patent Law (cited as "consistent" by Justice Sotomayor). So, is a cell phone more like a machine than a manufacture, that is, an article produced for use "from raw or prepared materials" ?

The next chapter in this saga may well be written by the Federal Circuit because these galactic combatants don't have a history of settling their battles, and thus the design trilogy might well continue.

We will keep you posted, and...

May the courts be with you...