United States: Is This Patentable?

by Nathaniel W. Edwards
Lewis Roca
Your LinkedIn Connections
with the authors
To print this article, all you need is to be registered or login on Mondaq.com.

One of the questions most often asked of patent attorneys is: "Is this patentable?" Such a question may apply to the questioner's own invention or to the purported invention of another.

While it may appear to be a simple question, there are actually a few different ways to interpret and answer the question: "Is this patentable?"

I.  "Does this meet all the requirements of a patent?"

This interpretation of the question asks whether an invention meets all the requirements so as to merit a patent grant. This question may be asked when an inventor or company is exploring options for protecting a new invention against copying and misappropriation by competitors or other parties.

In summary, the requirements for obtaining a patent include subject matter eligibility, novelty, obviousness, and written description. In addition, new federal statutes* have switched the U.S. patent system from a "first to invent" system to a "first to file" system, making timing a crucial consideration.

Answering this question is a process during which patent applicants may negotiate with examiners in the U.S. Patent & Trademark Office to identify and define an invention that meets the foregoing requirements. The standard track for examination may take several years, while accelerated examination may conclude within a year or so.

* The Leahy-Smith America Invents Act (AIA), which was passed in 2011 and whose central provisions went into effect in 2013, represents the most significant change to the U.S. patent system in over fifty years. In addition to the "first to file" rule change, the AIA also added new options for accelerating patent examination and for challenging patent validity at the United States Patent & Trademark Office.

II. "Is this the type of thing that is eligible to patent?"

This interpretation is directed to whether an invention is even eligible for a patent. Patent attorneys and judges may refer to this as "patentable subject matter" or more precisely as "patent-eligible subject matter." Such a question may be asked of new technologies that do not neatly fall into traditional and generally accepted notions of invention.

The statute that governs "patent-eligible subject matter" at least for utility patents is 35 U.S.C. § 101. How that statute is to be interpreted, however, remains in flux. The infographic below illustrates the general categories that are eligible for patents and categories that have been judicially carved out as being ineligible for patents, as well as examples for each. 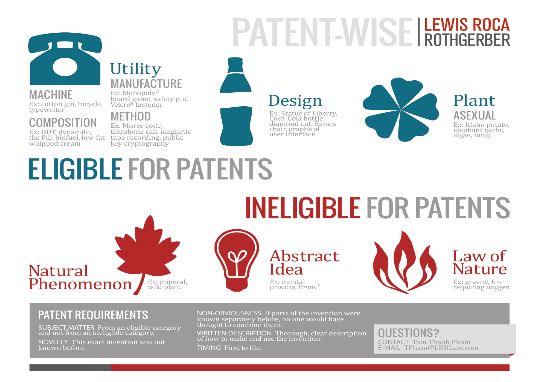 Controversy may arise, however, when an invention appears to incorporate one of the categories of ineligible subject matter. Such disputes have encompassed, for example, cases regarding whether certain gene patents incorporate laws of nature and whether certain software-related patents incorporate abstract ideas. The United States Supreme Court addressed the former recently, finding that certain patents on isolated genes for breast cancer fell squarely within the law of nature exception. Ass'n for Molecular Pathology v. Myriad Genetics, Inc. (June 13, 2013). The latter issue, however, has been extensively litigated in recent years with no clear answer.

The United States Court of Appeals for the Federal Circuit, which has exclusive jurisdiction over patent appeals cases, has been deeply divided on the subject. In the past six months alone, the Federal Circuit issued the following decisions pertaining to the patent-eligibility of software:

Accenture Global Services, GMBH v. Guidewire Software, Inc (September 5, 2013) held that "simply implementing an abstract concept on a computer, without meaningful limitation" does not confer patent-eligibility to a computing system that includes such components as server, client, database, and processor.  The Federal Circuit has been asked to rehear the case with the full en banc court.

Ultramercial v Hulu (June 21, 2013) held that a computerized method for distributing advertising in conjunction with copyrighted content over the Internet was indeed patent-eligible, because a claim tied to a "specific computer" in a "specific way" and reciting "specific steps with many limitations" was more than a "mere reference." A petition for certiorari was filed with the U.S. Supreme Court on August 23, 2013.

CLS Bank Int'l v. Alice Corp. Pty. Ltd (May 10, 2013) was heard en banc by ten judges and resulted in seven different opinions. Because no more than five judges signed onto any one opinion, there was no clear majority. As such, the judgment of the district court—which had invalidated claims directed to a method, system, and computer-readable medium—was allowed to stand. A petition for certiorari was filed with the U.S. Supreme Court on September 4, 2013.

In the meantime, the USPTO currently provides various options—with additional proposals making its way through Congress—to challenge the patentability of already-granted patents by showing that such patents seek to claim ineligible subject matter or otherwise fail to satisfy all patents requirements as described above.