by Scott A. McKeown
Ropes & Gray LLP
Your LinkedIn Connections
with the authors

Prior to the sun setting on the Covered Business Method (CBM) patent challenges this past September, the filings of such challenges with the PTAB had tailed off significantly. This led many to believe that the proceeding had outlived its usefulness. However, a recent uptick in business method assertions (as I predicted would occur) seems to demonstrate that the mere existence of the CBM proceeding had a prophylactic impact on the assertion of business method patents.

By way of reminder, the Covered Business Method (CBM) option at the PTAB was designed as "transitional" As such, it was given an 8-year lifespan before it was slated to "sunset" on September 16, 2020. The reasoning for this time limitation was that Congress believed that between the State Street Bank and Bilski patentable subject matter SCOTUS decisions, that the USPTO had issued a number of patents under the more liberal standard of State Street that would not meet the recalibrated Bilski 101 standard. And, that as a result, businesses rarely embroiled in patent litigation (banks, etc.) were being forced into unfamiliar litigation to combat these outdated patents. Congress, therefore, devised a transitional proceeding because the business method patent problem was perceived as being limited to a batch of State Street era patents.

CBM was quite effective in dealing with these patents as there was no limit on the timing of such a filing (i.e., older litigations could still be eligible, unlike IPR) there was a more favorable estoppel provision, and an enhanced ability to stay a litigation in view of CBM given the interlocutory review of a denied motion to stay. As CBM increased in popularity to combat such patents, summary determinations under 101 became more popular in the district courts. Given the analysis on CBM eligibility overlapped 101 analysis, CBM filings started to get overlooked in favor of court determinations. At the same time fewer such patents were being asserted given the enhanced 101/CBM risks, especially by non-practicing entities that required outside funding.

As we approached last September it was believed that CBM had run its course given the filing trends, and given patent applications filed since 2013 were eligible for PGR (where 101 could be raised), that CBM had done its job by rooting out the remaining State Street patents.

Recent statistics, however, seem to indicate that there are more than a few stragglers being asserted. 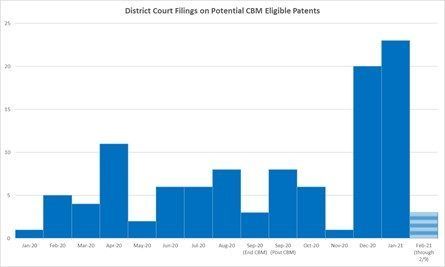 The above stats looked at patents classified in traditional business method art Class 705 and USPTO art units 3620, 3680 and 3690. The window before September 16, 2020 was extended out 9 months. Also considered were the asserted claims, and the defendants - a majority of which are banks and investment companies sued in Texas courts. One exemplary plaintiff, Caselas LLC., has filed 23 lawsuits against bank and credit unions based on patents that claim priority back to 2001. These patents include claims directed to computerized financial transactions alleged to manage charge-back allocations.

While there were rumors that Congress was considering extending CBM, it does not appear to have been given serious thought given earlier committee hearings on the topics (which may have focused too much on filing data as opposed to practical realities). We shall see if the recent trend catches the eye of original legislative sponsor, Chuck Schumer (D-Y) for reconsideration.