In the absence of federal cleanup standards for per- and polyfluoroalkyl substances ("PFAS") in groundwater, several states have started the process of regulating PFAS in groundwater themselves.  As a result, states have adopted a patchwork of regulations and guidance standards which presents significant compliance challenges to impacted industries.  This client alert explores the current landscape of state regulations regarding the guidance, notification, and cleanup levels for PFAS – typically perfluorooctane sulfonic acid ("PFOS") and perfluorooctanoic acid ("PFOA")  – in groundwater.

Although no legally binding standards have been issued at the federal level, the United States Environmental Protection Agency ("EPA") has issued two influential documents:  (1)  Interim Recommendations to Address Groundwater Contaminated with PFOA and PFOS; and (2) a  Lifetime Drinking Water Health Advisory Level of 70 ppt for PFOS and PFOA.  While EPA's health advisory level is non-binding, and is primarily intended to address drinking water contamination, several states have nevertheless used the EPA's recommended 70 ppt as a baseline for establishing groundwater limits, which fortunately does create some regulatory consistency between some states.

The snapshot provided below is current as of July 19, 2021, but it is important to note that this is a rapidly developing regulatory space.  Some states, such as  North Carolina,  Pennsylvania, Rhode Island, and  Wisconsin have proposed groundwater regulations for PFAS which may take effect soon, and more state actions, as well as possible federal action, are expected to be announced later this year.  All of which means that businesses should consider whether they currently use or discharge any PFAS compounds, and if so, evaluate what state regulations may apply, particularly if they operate in any of the below-listed jurisdictions.  In addition, owners of property with legacy PFAS use, and prospective purchasers of commercial and industrial properties, should review the most current groundwater quality standards as part of the due diligence process. 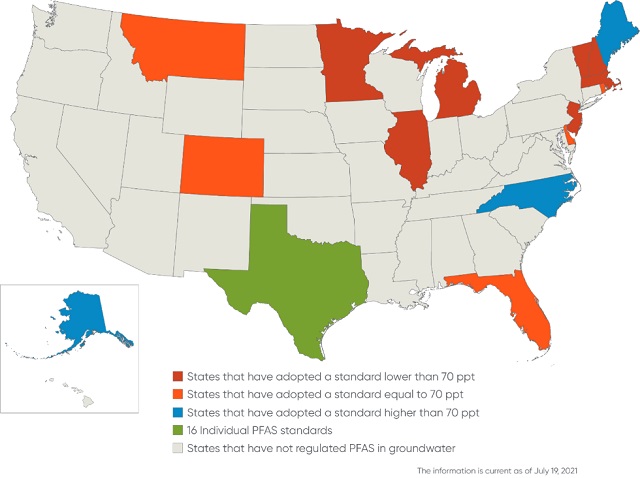 Businesses operating in the 16 states that have already enacted some form of regulation should consider whether they currently use or discharge any of the regulated PFAS compounds.  In addition, owners of property with legacy PFAS use, and prospective purchasers of commercial and industrial properties in these jurisdictions will increasingly need to incorporate the groundwater quality standards as part of their due diligence processes.