Adding to a growing list of genericness rulings, the Board affirmed a refusal to register ALGAE WAFERS for "fish food," finding it to be generic for the goods. The Board also affirmed an alternative refusal under Section 2(e)(1), deeming Applicant Hikari's proof of acquired distinctiveness under Section 2(f) to be inadequate in view of the highly descriptive nature of the term. In re Hikari Sales USA, Inc., Serial No. 86439012 (March 29, 2018) [precedential] (Opinion by Judge Cheryl S. Goodman). 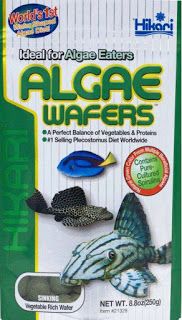 As usual, there was no dispute here as to the genus of goods, which the Board found to be congruent with applicant's identification, i.e., "fish food." See Magic Wand, 19 USPQ2d at 1552 ("[A] proper genericness inquiry focuses on the description of [goods or] services set forth in the [application or] certificate of registration."). The relevant public comprises consumers who use or purchase fish food, i.e., plant or animal material for consumption by fish kept in aquariums or ponds.

The record evidence bearing on the public's understanding of "Algae Wafers" included dictionary definitions of the constituent terms; Applicant Hikari's specimen of use (shown above) depicting the goods in wafer or disk form (see lower left corner), stating ""Ideal for Algae Eaters," and indicating that the goods include spirulina (a microalgae) as an ingredient; applicant's brochure referring to the goods as a "sinking wafer;" examples of use of the term by competitors; third-party Internet evidence referring to fish food for algae-eating fish; use of the term in books and news stories; Google search results; applicant's policing efforts; applicant's survey results; and testimony from Hikari's linguistic expert.

Hikari pointed to its filing of four infringement suits against competitors, two of whom no longer use "algae disks" with their products. The Board gave this evidence no weight, since the competitors may have agreed to discontinue use of the term in order to avoid litigation rather than because they considered the term distinctive.

Turning to Hikari's survey evidence, the Board pointed out that, like various circuit courts of appeals, it has found that as to genericness, consumer surveys "are only appropriate to consider in a case where the question is whether a coined or arbitrary mark has become generic, and is not appropriate to prove recognition of an otherwise not inherently distinctive mark." Frito-Lay, 124 USPQ2d at 1196 (citing Hunt Masters, Inc. v. Landry's Seafood Restaurant, Inc., 240 F.3d 251, 57 USPQ2d 1884, 1886 (4th Cir. 2001)

The Board observed, however, that even if it considered the survey evidence, it was entitled to little weight due to numerous flaws in the survey and Hikari's interpretation thereof. Hikari claimed a recognition rate of more than 50% in arguing that ALGAE WAFERS is not generic and has secondary meaning. The Board noted, on the other hand, that more than 47% of the 1001 respondents that identified "Algae Wafers" with multiple sources, named someone other than Hikari.

Moreover, the survey was flawed because it did not utilize a control group and no pre-testing was performed, and therefore the Board could not be sure that survey participants actually understood what they were being asked.

The survey asked consumers whether they "associated" the term "Algae Wafers" with one or more companies. But the survey does not adequately reveal the nature of the association a consumer perceives between "Algae Wafers" and Applicant Hikari and the other companies identified, as there were no follow-up questions inquiring as to the  reason for identifying Hikari, or another company that would establish what the respondent understood.

Moreover, the survey did not explore the proper universe. Although the goods were broadly identified as "fish food," the survey respondents were limited to purchasers of fish food for tropical fish in households where tropical fish are owned and did not include those who purchase fish food for fish other than tropical fish. See Omaha Steaks Int'l, Inc. v. Greater Omaha, 128 USPQ2d 1686, 1692 (Fed. Cir. 2018) (where identification of goods broadly identified goods as meat and beef, survey universe too narrow because it eliminated from survey meat eaters who buy their meat from sources other than plaintiff). Also, the survey may have been skewed towards Hikari by excluding respondents who had not seen the term "Algae Wafers" on any food products for tropical fish but owned or cared for tropical fish and purchased food.

Turning to the analysis of the term ALGAE WAFERS by Hikari's linguistic expert, the Board found that evidence to be useless:

We do not know the sources he used to support his conclusions regarding the meaning of "wafer." But in his analysis of the term "algae," Dr. Habick focuses on the ingredient in a wafer that is for human consumption, rather than considering algae as an ingredient in connection with fish food, the relevant goods. Dr. Habick did not explain why he did not consider in his analysis other definitions or meanings for "wafer," including those referencing a disc shape. Dr. Habick also did not consider Applicant's own advertising and promotional materials which describe the goods as having a disc shape, containing algae, and for algae eaters; nor did Dr. Habick consider any third party use. Moreover, there is no evidence suggesting that Dr. Habick is a trademark expert, and his opinion as to whether "Algae Wafers" is suggestive, descriptive or generic is not entitled to any weight.

Finding that ALGAE WAFERS "has a plain and readily understood meaning as a type of fish food in wafer form containing algae," the Board deemed the term generic and ineligible for trademark registration.

Acquired Distinctiveness: For completeness, the Board considered Hikari's claim of acquired distinctiveness. Not surprisingly in light of the record evidence and its finding of genericness, the Board found ALGAE WAFERS to be highly descriptive of fish food, and thus that Hikari had a correspondingly higher burden of proof under Section 2(f).

Applying the CAFC's Converse factors, the Board observed again that Hikari's survey carried little probative weight due to its several deficiencies, and that the conclusion of its linguistics expert that "Algae Wafers" has acquired distinctiveness was likewise of little probative value.

Hikari has used the term ALGAE WAFERS since 1991, and spent about $95,000 per year on print and Internet advertising, but the record lacked "sufficient information as to whether the amounts stated are significant in the industry." Moreover, its advertisements also featured other Hikari products sold under other brand names, "thus diluting how much of the advertising spending should be counted toward building consumer awareness of 'Algae Wafers.'" Hikari's trade show expenditures averaged about $80,000 per year, but it was unclear  how much of the advertising and trade show expenses were related to products sold under the "Algae Wafers" designation. There was no information of record as to the circulation of the magazines in which Hikari advertised, and no information as to the number of visitors at its trade show booths. Consequently, there was nothing to indicate "the extent of consumer exposure and any resulting impact on consumer perception."

The Board concluded that, "[g]iven that the designation is highly descriptive, much more persuasive evidence than Applicant has submitted would be necessary to show that "Algae Wafers" has become distinctive as a source indicator for Applicant's fish food."

And so the Board affirmed the alternative refusal to register on the ground of mere descriptiveness and lack of acquired distinctiveness.