Earlier this year we looked at M&S v Aldi in the Caterpillar wars, and the case at the moment is Oatly v Glebe Farms.

Swedish drinks firm Oatly produce a range of oat milk-alternative products, a net worth of $15 billion and sell products in over 20 countries.

Glebe Farm is a family-run farming company based in Cambridgeshire that grows and processes gluten free oats. They launched a range of oat milk-alternative drinks under the name "PureOaty" in 2020.

Oatly filed proceedings at the Intellectual Property Enterprise Court ("IPEC"), a specialist division of the High Court claiming trade mark infringement and passing-off of both its "OATLY" trade mark and its product packaging.

As with the Caterpillar wars earlier this year, the case has caught the attention of the media and has been widely reported, with many reports accusing Oatly of bullying a smaller company, and the court of public opinion may not follow the legal decision.

The case was heard at the IPEC in June, and a decision is expected in the next few days.

Both names have a hint of descriptiveness – they both refer to oat based milk drinks. Oatly is the 'original' brand in the sector, and many other brands in the sector refer to 'oat' in a descriptive way, but using an unrelated brand name (such as ALPRO, INNOCENT, PROVAMEL and RUDE HEALTH).

This is probably the strongest part of Oatly's claim and again brings up a timely reminder that filing and registering your brand as a trade mark is only part of the battle. Especially with such a reputation and market position, Oatly should, and are entitled, to defend their brand's position in respect of infringements and similar marks. The size of the entity involved is, in legal terms, quite irrelevant.

In a comparison of the word marks, there is a degree of similarity – they share the letters O-A-T-Y and taking account of the 'imperfect recall' of consumers, it is likely that O-A-T-L-Y and O-A-T-Y would be seen as the same. Glebe Farm's mark incorporates the additional element "PURE", which again can refer to the 'pure' nature of the oats used in the products.

If Oatly have relied on their reputation and use to date, they may well be able to claim a higher level of distinctiveness of their earlier OATLY mark, irrespective of the inclusion of the descriptive element "OAT".

Initially, in 2019, Glebe Farm launched their milk-alternative under the name 'Oat Drink', before testing in the market and rebranding as "PureOaty" a few months later. Glebe Farm claim that the name "PureOaty" was chosen to call to mind the concepts of purity and oatiness and is a play on the word PURITY. 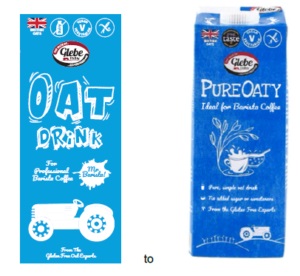 As a general point, it is common in the UK for milk-alternatives to be sold in carton format, but when the two forms of packaging are put next to each other, there appears to be a number of differences. Oatly claim that Glebe Farm's intentions were to bring Oatly's products to mind and benefit from the reputation and investment that has been made by Oatly to date. 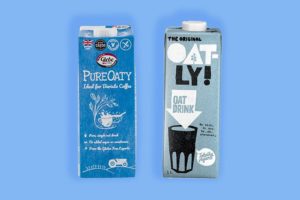 What will the 'Oat'come be?

It is interesting to see another trade mark case catch such high media attention, but it has indeed been an unusual 18 months and we will be waiting to see the decision when issued shortly. The key question will be whether there is a likelihood of confusion that the average consumer would be confused between the two brands.

After considering the marks relied upon and the arguments made, there appears to be sufficient differences in the two sets of packaging to preclude confusion on an overall comparison. Given that the Glebe Farm product also includes the Glebe Farm logo and brand, it is unlikely that consumers would believe that the two product lines originate from the same or economically linked undertakings.

The case is likely to hinge on whether 'PureOaty' is deemed similar enough to 'OATLY'. There is a wealth of previous case law that assesses marks with a descriptive element, with varying degrees of success. If Oatly can show their strong market dominance, they would have a stronger case against another 'oat' based name.

Social media and the Court of Public Opinion

Both companies have made public statements, and Oatly have gone so far as to release some of the court documents available (see here).

Oatly are defending their brand, and the court proceedings, if in their favour, will likely assist in reducing future infringements. The publicity is useful in this respect, and if it prevents other third parties encroaching on their market share, it may be a case of "no publicity is bad publicity".