by Caroline Day
HLK
Your LinkedIn Connections
with the authors

I've been in the patent profession for over 20 years, and sometimes it's nice to be reminded why the whole system exists in the first place. Happily for me, I recently had such a reminder in the somewhat unlikely form of the official trailer for Avatar 2, or more properly 'Avatar: The Way of Water'.

The trailer looks spectacular, and there is a snip at 1 minute 22 seconds which has drawn a lot of attention. A Na'vi character (i.e. a giant blue alien), manipulates combinations of leather and woven fabrics which are partially submerged. These fabrics, along with the hands of the character, look incredibly realistic. There has been debate as to whether these can possibly be digital effects, given the realism achieved, but blue skinned actors are hard to find, and that doesn't look like body paint.

So how is it done?

Here is where the magic of the patent system comes in. The patent system is designed so that, in exchange for fully disclosing an idea so it is available for the future of humankind, a short-term monopoly is provided. Thus the curious can learn what might otherwise be kept as a trade secret.

Returning to Avatar, the renowned New Zealand agency, Weta Digital, worked on the digital effects and in the first half of 2020 Weta filed a bunch of patent applications relating to modelling virtual fluids. Excitingly, these are now published for the world to see.

Watching the trailer, you can see the character's hand slap down into the water before seconds later a fantastical creature burst through the surface, dripping wet. Now take a look at Weta's patent for generating thin film interfaces. Figures 3A and B in particular are not a bad visual match for the trailer and if you want to know what's going on, it is all set out for you. At its heart, the application describes that the fluid is conceptually divided into a bulk fluid and an 'emitted fluid'. The bulk fluid can be simulated relatively economically in terms of the processing resources, but if an image portion representing a fluid is within a threshold amount of an interface between an object and the fluid, the so-called emitted fluid is simulated, and more complex processes apply: for example, surface tension, capillary wave patterns, oscillating droplets and thin film dynamics may all be considered.

Despite the visual accomplishment of the imagery, a key component of patentability can be making efficient use of computing resources, which is clearly the case here: the complex processes are only applied where they will be visually impactful.

But how about the wet fabrics? Well you can read about that here. This hints that the secret sauce may be modelling the fabric as particles linked by forces and setting up a simulation that weakly couples the fluid and the fabric, such that each can be modelled separately (and computationally efficiently).

There are many other applications in Weta's name, each providing an enticing piece of the puzzle leading to the astonishing visual results. This really feels like a case where patents provide a peek behind the curtain which feels almost illicit, laying bare the secrets of the world's foremost digital artists in a space we can all reach. You could almost say they're like seeds of a sacred tree (that's an Avatar thing, by the way). 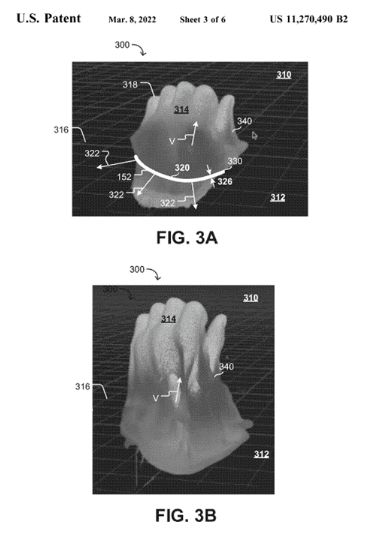 ARTICLE TAGS
UK Intellectual Property Patent
POPULAR ARTICLES ON: Intellectual Property from UK
Trademarks And Brands: Key Considerations For M&A Transactions
Gowling WLG
A brand will not necessarily be crucial in every transaction (and some acquisitions may involve plans to promptly re-brand post-completion), but, where it is, there are some key considerations to bear in mind.
Tesco v Lidl
HGF Ltd
A decision of interest to the retail industry and retailers, but also to trade mark attorneys and lawyers on the everchanging topic of bad faith.
See You On The FROW: Estée Lauder Moves Into Fashion With $2.8 Billion Acquisition Of Tom Ford
Marks & Clerk
ighting off stiff competition from Kering (owner of Gucci, YSL, and others), Estée Lauder has announced the purchase of the Tom Ford brand - and for US$2.8 billion (£2.4 billion), no less.
Who's Laughing Now? Banksy "In Charge" Of Trade Mark Rights...
Marks & Clerk
Banksy's mark representing his 2002 graffiti of a monkey strapped with a blank sign, which in the original artwork reads "Laugh now, but one day we'll be in charge"...
Comparing The Value Of European Vs Unitary Patent Validation
HGF Ltd
The EPO's European patent system is on the brink of the biggest change in a generation – from 2023 it is expected that a new unitary patent (UP) will become available via the EPO.
The Unified Patent Court And Unitary Patent Are Almost Here – Steps Patent Owners Should Take Now
HLK
The Unified Patent Court (UPC) recently published a roadmap towards a 1 April 2023 start date for the UPC and Unitary Patent (UP) system, with the Sunrise period...
FREE News Alerts
Sign Up for our free News Alerts - All the latest articles on your chosen topics condensed into a free bi-weekly email.
Register For News Alerts
Article Tags
UK Intellectual Property Patent
Related Articles
Gender Diversity At The UPC HGF Ltd
Côte d'Ivoire - The Next International Fashion Hub Marks & Clerk
Frasers Group Acquires Gieves & Hawkes - A Revival Of British Tailoring? Marks & Clerk
News On Plausibility At The EPO: G2/21 Oral Proceedings Kilburn & Strode
Prevention Is Better Than Cure Marks & Clerk
Mondaq Webinars
Modern Product Liability: Adapting to the Changing Risks for Product Manufacturers in the US and Europe
Cooley (UK) LLP
The New Swiss Data Protection Act - What You Need To Know
FABIAN PRIVACY LEGAL GmbH
More Webinars
Comparative Guides
Anti-Corruption & Bribery
Artificial Intelligence
Banking Regulation
Blockchain
Cartels
More Guides
Mondaq Advice Centres
UK
Coming to and Investing in the UK
Global
Trademarks in SAARC Countries
More MACs
Upcoming Events
The 2023 Sedona Conference On Global Intellectual Property Litigation
WilmerHale
Panel London UK
Mondaq Social Media