UK: Prime Brokers, Trusts And The Meltdown Of Custodianship

by Philip Wood
Allen & Overy
To print this article, all you need is to be registered or login on Mondaq.com.

One of the issues which caused consternation in relation to the insolvency of Lehman Brothers was the fate of securities held by a prime broker in custody for its clients.

A prime broker is typically an investment bank which buys or sells securities on behalf of clients, such as hedge funds. The broker holds the securities in custody for the client.

Custodianship of securities is a form of trust. Custodianship in particular, and trusts in general, are crucial for the safety of markets. Along with security interests and insolvency set-off, they are one of the trilogy of financial risk mitigants in a case of the bankruptcy of a counterparty.

Trusts have had an astonishing history. A leading French jurist observed in the 1930s that trusts are used for "almost everything". A Scottish professor said recently in answer to the question of what trusts are used for – "one might almost as well ask what are contracts used for". So why is the idea rejected in more than half the world's jurisdictions?

These days family trusts and will trusts of the estates of a deceased are tiny minority uses. The largest trust in the world holds securities worth more than half the world's GDP. It is called the Depository Trust Corporation. The largest trust in Europe holds securities worth more than the entire GDP of the EU. It is called Euroclear. Both the Depository Trust Corporation and Euroclear are settlement systems for securities. They are custodians of securities for the benefit of clients so that the clients can transfer securities from one account to another easily and quickly without having to transfer the actual securities themselves. They are both classical trusts. If you add, for example, custodianship, investment trusts, bondholder trustees, trustees for security interests, pension trusts, equipment trusts, deposit funds, and all the rest you get a legal construct of immense utility which involves colossal amounts worldwide.

Yet there are large risks, often unnoticed.

France has recently re-introduced a hesitant trust – back to history, an unquestionably sound step.

Therefore, if I deposit my furniture with a warehouse and the warehouse becomes insolvent, I get my furniture back. Virtually all countries accept that the goods are immune from the creditors of the warehouse. This is an ordinary deposit or bailment of goods. The warehouse holds the public title – the possession of the furniture which everyone can see.

But if the asset is anything else – land or securities, for example – the picture changes. So if I deposit a bearer bond with a bank as a warehouse/custodian, then in numerous countries I do not get my bearer bond back on the insolvency of the bank. The bond goes into the pool of assets available to the creditors of the bank. Amazing. What is the difference between the furniture and the bond?

The attached map shows the incidence of the universal trust worldwide. There is a lot of red there and patchy yellows. The full blue and "nearly there" green countries are in a minority. Generally, the common law countries accept the trust but the other two main groups – the Napoleonic and the Roman-Germanic – do not. There are many exceptions. France has recently re-introduced a hesitant trust – back to history, an unquestionably sound step.

The position with regard to the custodianship of securities is somewhat better than that shown in this universal map because of special legislation protecting custodianship of securities in many refusing countries, e.g. Germany, Russia, Switzerland and Austria, but not the Netherlands. This is much less often the case for bondholder and security interest trusteeships. Trusts of land are often rejected even in countries which have special trust legislation, such as Jersey.

The English have often been triumphalist about the trust – one of the greatest achievements of English law, according to the historian Maitland. This triumphalism is doubtful. The English did not invent the trust. Actually, it was brought across to England by the Norman conquerors (originally Vikings) who were the genesis of the idea in England. The Normans did not invent it either. For the invention of this simple concept, go back to the Romans (there is a book on the Roman law of trusts), before them the Greeks and before them, probably the Mesopotamians, present-day Iraqis. It would be no surprise to find that the ancient Asian civilisations were there first.

Hence, the concept of being able to give apparent title of an asset to an intermediary on the basis that the asset is not lost if the intermediary becomes insolvent is accepted for goods worldwide (because of functional necessity) but only patchily for other assets. How could this happen, in particular, having regard to the enormous importance of intermediaries, such as custodians of securities, in modern societies?

The concept of false wealth is so potent that it clings on in relation to publicity for and registration of security interests for their validity. So it has not gone away.

The trust for any asset other than goods got rejected for a medley of reasons, all now out of date. The first and most powerful reason was the objection to false wealth inducing false credit. Under this theory a debtor with many possessions but no assets deceives creditors by ostensible or reputed ownership and hence credit-worthiness. This objection, though very deep historically, has been swept away by the fact that creditors now rely on financial statements (which did not exist in the old days) and also by the fact that many, if not most, of the assets of corporations are invisible anyway, such as bank deposits and securities.

The concept of false wealth is so potent that it clings on in relation to publicity for and registration of security interests for their validity. So it has not gone away.

All of these legalistic reasons got caught up in nineteenth century romantic emotions in mainland Europe with indignation about feudalism, muddled ideas that capitalism required absolute ownership, the right to have and to hold, and desires to override the tying up of land. This tying-up mischief can easily be stopped by imposing long-stop periods after which trust property must vest.

In any event, the astonishing situation is that all of these obsolete motives are still with us. For example, both China and Russia have recently started again with their private law legal systems, free from the hypnotic power of the past. Nevertheless, Russia does not have the universal trust, but China introduced it in 2001 – probably the most important legal event in our field in the past 25 years.

In those countries that do recognise the trust, there is another major issue which is nothing to do with defects in the law but which stems from market practice. This issue is that if the real owner permits the custodian to deal with the securities as if the custodian owned them instead of the client, the trust fails. The client or real owner has transferred the property to the custodian. The essence of property is that the owner of the property can do what it likes with the asset – sell it, lend it, use it, destroy it. It must follow that anybody who has these powers over an asset must be regarded as the owner of the asset.

Therefore, if the prime broker or other custodian is permitted to lend out the client's securities, or to grant charges over them for private loans to the custodian, there would be an issue as to whether this was enough to cause the trust to melt down.

The law started mainly with cases where a farmer allowed the miller to use the grain as the miller's own, e.g. by selling it. When the miller became bankrupt, the farmer was left with just a worthless debt claim against the miller, not a property claim for the grain itself. Since these grain cases, there have been hundreds of other cases in trust countries defining whether or not the trust has been busted.

When the trust melts is detailed. There is much debate about what is enough for the trust to melt down into debt. But there is nothing wrong with the principle. In the case of banks, in the old days the depositor allowed the bank to use the gold deposited as the money of the bank for lending as if the money belonged to the bank. So the depositor became a mere creditor and could not get back the actual piece of gold. That is universally the case in relation to bank deposits everywhere. It is therefore no surprise that near-money, like securities, should be heading in the same direction if that is what the parties agree.

There are additional complications, e.g. commingling between client property and how you share losses if the broker uses some of the securities of clients for house purposes.

A further issue in trust countries concerns cash deposits. This again is not a defect in the law but arises from practical reality. If a client deposits money with a bank on terms that the bank has to hold it on trust, it is not enough for the bank just to open a separate account. In order to identify the trust property, the bank has to deposit the cash with a third party bank and then hold the benefit of that deposit, that claim against the third party bank, on trust for the client. This is because, if the original bank just opens a segregated account on its own books, you could never identify the cash property which belongs to the client. But you can identify the trust property as a claim against a third party bank.

The result of this inevitable situation is that, where the prime broker has a cash account for the client, e.g. to hold repayments of bonds, dividends and interest, then the prime broker almost invariably is a mere debtor to the client and does not hold the benefit of the money in trust. Again, there is massive case law on this situation.

We need intermediaries who can look after our assets for us so that we are not expropriated if the intermediary becomes insolvent. Regulators the world over need to accelerate their thinking about this type of obvious risk – the absence of the trust in many parts of the world. The obvious is often missed or just put in the "too difficult" box. It really is time now for us to put aside the ancient muddle. 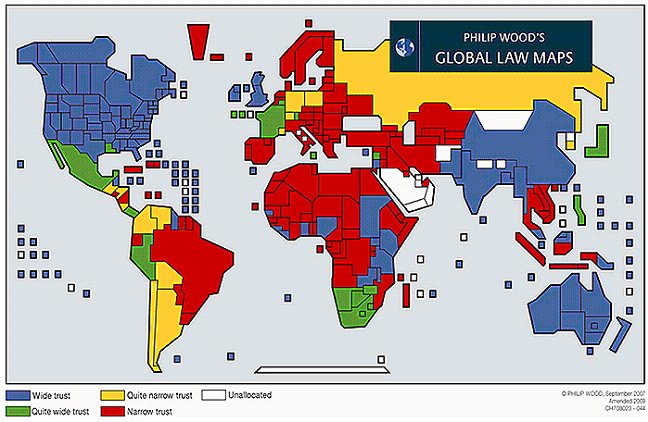