Turkey has experienced a significant economic growth over the last decade; therefore, the need for energy production has grown significantly. Given the relatively dependent nature of the Turkish energy market, the Turkish regulators aim to increase the domestic production to control the current account deficit as well as keep the carbon emission levels relatively stable. Turkish renewable energy production is now being strongly incentivised for private parties through government subsidies, license discounts, tax incentives and enabling and facilitating a less burdensome procedure for land allocation to boost renewable energy generation.

The Law No. 5346 on the Use of Renewable Energy Resources for Generating Electricity (the Renewables Law) defines renewable energy resources as non-fossil energy resources such as wind, solar, geothermal, biomass, biogas including landfill gas, wave, drift, tide and hydroelectric power plants (HEPP) which are channel-type or river-type or whose reservoir area is less than 15 kilometre squares.

Generation License: According to the new Turkish Electricity Market Law numbered 6446, entered into force on 30 March 2013, (the Law) and the Electricity Market License Regulation which entered into force on 2 November 2013 (the License Regulation), enacted in line with the new Law, generating electricity in the Turkish market requires an electricity generation license to be obtained from the Energy Market Regulatory Authority (EMRA). EMRA recently enacted the License Regulation determining the detailed requirements of the regulatory approval process to obtain a pre-license and license.

Legal entities applying for a generation license must be formed as a joint stock corporation (anonim şirket) or a limited liability partnership (limited şirket) in accordance with the Turkish Commercial Code numbered 6102 (the TCC). Further, articles of association of such legal entities must stipulate that all of the shares other than the publicly held shares thereof are in registered form and no bearer share certificates shall be issued.

Step 1 Pre-License Application: Applicants should apply to EMRA by submitting the pre-license application petition form attached to the new License Regulation together with the required information and documents, which are determined by EMRA's decision regarding "the list of documents and information required for pre-license and license application" numbered 4709-7 and published in Official Gazette dated 28 November 2013 and numbered 28835. During the pre-license application, the following criteria must be satisfied: (i) submission of a bank letter of guarantee in the amount of TRY 10,000 for each MW and with a maximum limit of TRY 5,000,000 determined in under the EMRA's decision numbered 6812-1 and published in Official Gazette dated 31 December 2016 and numbered 29935; (ii) the minimum share capital of the company must exceed 5 % of the investment amount; (iii) the payment of the pre-license fee; (iv) amendment to the articles of association of the company to prohibit change in its shareholding structure during the pre-license period.

Furthermore, generation facilities based on solar and wind energy must apply within the period specified in the regulation and present a wind/solar measurement of a term of at least one year in the last three years for the proposed site. Applicants for (i) generation facilities based on geothermal energy are required to submit a document evidencing land allocation; (ii) HEPPs are required to submit a water usage agreement (su kullanma hakkı anlaşması) or a document evidencing the right to execute such agreement; and, (iii) wind and solar plants owning the project site are required to evidence that they are the proprietor of the project site.

Step 2 EMRA and Turkish electricity transmission Company (Türkiye Elektrik İletim A.Ş. – TEİAŞ) Evaluation: When the application file is complete and accepted for evaluation by EMRA, the General Directorate of Renewable Energy will evaluate the project technically and send it to TEAİŞ or the relevant distribution company for the grid connection opinion. The grid connection and voltage level is determined by TEİAŞ and/or the relevant distribution company.

Step 3: Granting of Pre-License and Obligations during the Pre-License Period: Upon obtaining both the General Directorate of Renewable Energy approval and TEİAŞ's affirmative grid connection opinion, EMRA issues the pre-license for the applicant. During the pre-license period, the following permits and administrative procedures must be obtained and/or completed:

Step 4 License Application: The applicant must complete the abovementioned procedures in order to apply for a generation license. Furthermore, the applicant is required to satisfy the following criteria: (i) submission of an additional bank letter of guarantee, which is determined between 1% to 3% of the total investment amount depending on the installed capacity, in accordance with EMRA's decision numbered 6812-1 and published in Official Gazette dated 31 December 2016 and numbered 29935; (ii) submission of a completion plan for the construction process (termin planı); (iii) payment of the license fee; (iv) amendment of the articles of association to reflect the restrictions on share transfers and mergers in accordance with the new License Regulation; and (v) increasing the minimum share capital of the applicant to exceed 20% of the total investment amount.

Step 5 Granting of License: EMRA shall, within 45 days of concluding that the required permits and administrative procedures of the applicant for the pre-license period have been completed, issue the relevant generation license and announce its decision on its website together with the trade name of the licensee, the type of the license and its duration.

Other than the environmental permits and operational permits, based on the type of the power plant certain constructional and administrative permits may also be required.

Pre-License and License Fee Incentives: For generation facilities generating electricity from renewable resources under the License Regulation, the pre-license and license application fee is reduced to 10%, which was previously 1 % of the regular license fee. Pre-license and license application fees depend on the installed capacity of the relevant generation facility and are set out in Table 2 below for 2017. The license fees are not perceived as unusually high by the international community as compared with other jurisdictions. Annual License fees are currently TRY 0.003 per kW, however, annual license fee is payable after the first eight years for generation facilities based on renewable resources.

Priority in Procedure: While assessing a license application, EMRA must prioritise the issuance of an opinion on interconnection for electricity generation companies holding a RES certificate.

Selling Guarantees: Retail sellers must, subject to certain conditions, purchase electricity generated from renewable energy resources, which is fed into the national distribution grid. The amount of electricity purchased by the retail sellers will be deemed parallel to the electricity sold under the RES support scheme and will be added to the pool operated by PMUM. 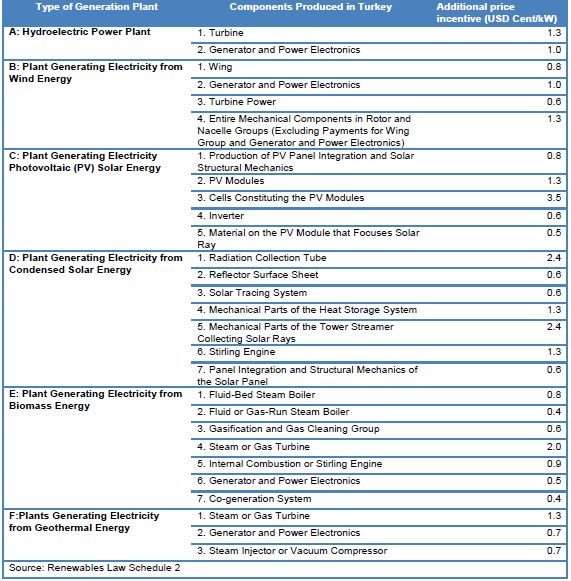 Protection from Development and Zoning: The Renewables Law prohibits the enactment of development or zoning plans which would affect the use and efficiency of the state or Treasury lands allocated to renewable energy.

Operating Without a License: The Regulation on Electricity Generation without a License enacted on 2 October 2013, has increased the capacity limit for generating electricity without a license to 1 MW, which can be further increased to 5 MW, with the decision of the Council of Ministers for generation facilities using renewable resources. Generation facilities using the produced energy in their own facility are not subject to installed capacity limits. The regulation also allows for the transfer of generation facilities to third parties, provided that provisional acceptance of such facility has been obtained. The procedure for operating without a license is much less cumbersome compared to operating with a license. Facilities generating electricity within the limits set forth in the regulation need to apply to distribution companies within their region or to organised industrial zone distribution license holders. Incentives under the RES support scheme, including the feed-in tariff, are also applicable to renewable energy generation facilities operating without a license.

Share Transfers During the License Period: The following share transfers for generation companies are subject to the prior approval of EMRA as per the License Regulation:

In order to obtain EMRA's approval for the acquisition of shares of more than 10% of the share capital of a license holder company, the acquirer and its legal entity shareholders must provide EMRA with the relevant documents set forth in the License Regulation.