Turkey: A Jurisprudential Evaluation Of Post-Termination Non-Compete Obligations: Caution Over One Year!

Competition law enforcers are tend to demonstrate a rather draconian approach against post-termination restrictions. The underlying rationale behind such approach is the fact that post-termination restrictions are objectively harder to justify when compared to the restrictions imposed during an ongoing agreement. In other words, an ongoing relationship provides more elbowroom to discuss the economic rationale of a non-compete obligation. However, in the world of incessant creative destruction elicited by digitalization and technological developments, the circulation of goods and services have started to evolve around an olio of multi-dimensional know-hows and core innovations. Accordingly, as the associated level of essential know-how bilaterally transferred by undertakings increase, the contracting parties are urged to seek a post-termination protection for their most valuable commodities and core know-hows, which may take years to build from scratch.

Against this knife-edge backdrop, we will explain the legislative landscape and procedural background surrounding the enforcement of post-termination non-compete obligations. By the same token, we will also place the Turkish Competition Board's ("Board") decisional practice under the magnifying glass and provide a jurisprudential anticipation of the dominant tendencies, on a case-by-case basis, which governs the Board's enforcement trends. Hence, the overall aim of this article is to explain the basic concepts of post-termination restrictions and provide a practical guidance with reference value on the case law of the Board.

Non-compete obligations after the termination 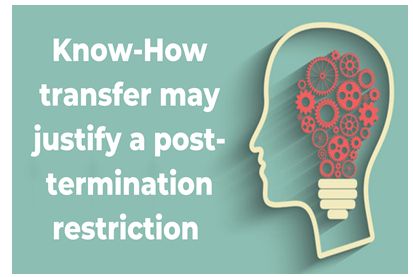 Accordingly, a non-compete obligation may be enforceable for a maximum term of after the termination, subject to the fulfilment of certain conditions. In this respect, the post-termination non-compete obligation; (i) must concern the goods and services which compete with the contracted goods or services, (ii) must be limited to the facility or land on which the buyer operated during the term of the agreement and (iii) must be mandatory for the protection of the know-how transferred to the buyer by the supplier. At any rate, an indefinite restriction could be imposed on usage and disclosure of any know-how, which has not become public knowledge.

The exemption system and the self-assessment regime

Generally, agreements (horizontal or vertical) which include competition restricting clauses (e.g. non-compete) are prohibited under Article 4 of the Competition Law. However, if the Board is satisfied with procompetitive effects of an anti-competitive agreement, it may grant an exemption from the application of the said Article 4. Such exemption system is primarily based on self-assessment. 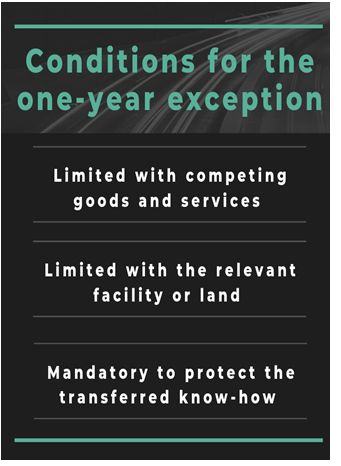 The parties are to undertake a self-assessment to determine whether the agreement in question fulfils the conditions of individual exemption themselves. The assessment for an exemption is carried out in two steps. The first step is to assess whether an agreement between the independent undertakings, has an anti-competitive object or actual or potential restrictive effect on competition. The second step only becomes relevant if an agreement is caught by Article 4 of the Competition Law due to the actual or potential restrictions on competition. In this step, any pro-competitive benefits produced by the agreement and whether those pro-competitive effects outweigh the restrictive effects on competition are determined.

Accordingly, the Turkish Competition Authority (TCA) has published certain secondary legislations to orient the undertakings in their self-assessment. These secondary legislations are the work product of the Board's cumulative enforcement experience and intends to provide insights on its general assessment tendencies. Therefore, as guiding as they may be, undertakings are expected to extract the core approach displayed therein and apply that on a case-by-case basis.

In this respect, the "one year legislative exception" is provided by the relevant secondary legislation and mainly aims to outline the three conditions, the fulfilment of which will allow the undertaking to enforce a one year post-termination non-compete clause. 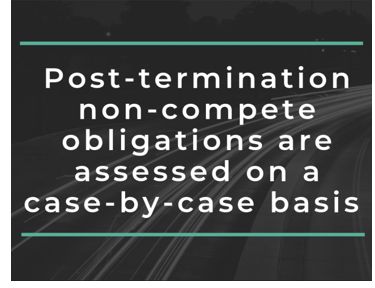 Against this backdrop, we would like to emphasize that post-termination non-compete obligations usually fall within the scope of the above-described self-assessment regime. Accordingly, undertakings with the intention of imposing such restrictions conduct a case specific assessment and examine whether the circumstances surrounding their case is in line with the framework provided by the secondary legislations.

At the end of the self-assessment, if the undertakings cannot determine whether the pro-competitive effects outweigh the restrictions or not, they are encouraged to put the matter into the hands of the Board via an exemption application. In response to such application, the Board may; (i) grant an exemption and clear the restrictive clauses, (ii) provide a conditional exemption for a shorter term (or a narrower scope) than originally requested or (iii) reject the application and not provide any exemption. Considering that the post-termination non-compete obligation has not been implemented at the exemption stage, the Board does not impose any monetary fines even if it rejects the application to grant an exemption.

Indicative Jurisprudence of the Board 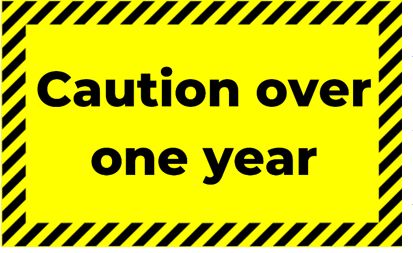 In its Reckitt Benckiser (13-36/468-204, 13.06.2013) decision, the Board assessed the application of a three-year non-compete obligation after the termination and ruled that such restriction is in violation of the Competition Law. Reckitt Benckiser, in defense of the three-year post-termination restriction, argued that the post-termination restriction is based on commercially rational reasons such as prevention of the free-riding problem and protection of the know-how package transferred to the counterparts. However, the Board was not convinced by these arguments and ruled against the three-year term restriction.

Moving on a similar track, in its Altınbaş Petrol (12-54/1517-535, 06.11.2012) decision, the Board evaluated the dealership agreements in the fuel distribution sector and determined that a post-termination non-compete obligation for three-year would not comply with the Competition Law and its secondary legislation (the Communiqué). In another energy related sector, LPG dealership, the Board ruled against Milangaz's (11-45/1082-376, 17.08.2011) post-termination non-compete clause with an undefined term.

The Board has also reviewed Starbucks' (04-26/286-64, 15.04.2004) franchise agreements and ruled that a one-year post-termination non-compete was justifiable as long as the obligation is imposed only on the relevant facility and not region-wide. The main reasoning here was based on the fact that the franchise relationship required Starbucks to transfer a certain level of know-how concerning the formulas, products and services. Similarly, in its Takeda (14-13/242-107, 03.04.2014) decision, the Board cleared a two-year post-termination non-compete restriction for the medical products that was covered with the main agreement.

Lastly, in its NN (18-04/62-36, 08.02.2018) decision, the Board allowed a one-year restriction after the termination in the insurance market and reasoned that the market was not concentrated, the parties' market shares were relatively low and there was strong intra-brand competition in the market. The Board also provided that the agreement entailed certain training investments, technological investments and transfer of know-how.

Overall, as it is demonstrated above, the Board has a case-by-case basis approach on the post-termination non-compete restrictions. The assessment heavily depends on the circumstances surrounding the standalone cases.

Conditions which may be of importance for such analysis include (on a non-exhaustive basis); the market structure, term of the restriction, peculiarities of the relevant products and services, the level of know-how transferred during the main agreement, the genuine or essential nature of such know-how, technical or educational investments made by the parties, potential effects of the intended restriction on competition and potential injuries that may accrue by the parties in the absence of the intended restriction.