The Madrid Protocol on the International Registration of Marks (1989) currently has 106 members, covering 122 countries. In Africa, the Madrid Protocol has 22 members over 38 countries, due to the participation of the African Intellectual Property Organisation.

While there is a growing majority of African countries that belong to the Madrid System, Nigeria, South Africa and Angola are notable exceptions as the first, second and seventh largest economies in terms of nominal gross domestic product. 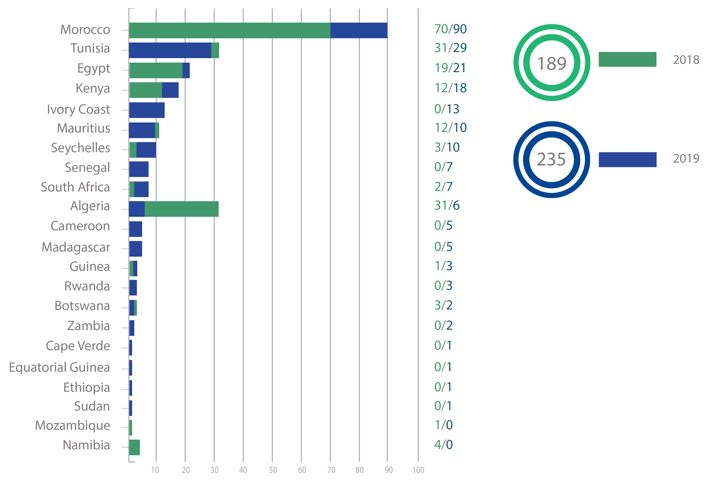 Table 1 shows that Mauritius, Seychelles, South Africa and Cape Verde are ranked as countries of origin on international trademarks even though they are not members of the Madrid Protocol. This is the result of a provision in the Madrid Protocol that provides entitlement to file an international application to applicants that - even if not domiciled in the territory of a member state - have real and effective industrial or commercial establishment in the territory of a member state.

While the growth is positive, putting the matter into perspective, Cyprus - a country with a population of 1 million - had roughly the same number of international trademark applications (231) as the combined countries of the African continent (235), which has a population closer to that of China.

ARTICLE TAGS
Portugal Intellectual Property Trademark
POPULAR ARTICLES ON: Intellectual Property from Worldwide
UPC Could Open Its Doors In 2022
HGF Ltd
With news that the Austrian parliament has ratified the Protocol on the provisional application of the Agreement on a Unified Patent Court on 2 December 2020, the Unified Patent Court (UPC) opening in 2022 is becoming more likely.
Webinar: Luther Reset Series: Digital Twins - Benefits And Challenges Of The Virtual World
Luther Rechtsanwalts­gesellschaft mbH
Digital Twins are created when a physical object or a business process is recreated digitally. Using digital twins, we can simulate how an object would interact with its environment or how a business process would change due to changed parameters.
COVID-19 Vaccine Patent Discussions
Deris IP Attorneys
Discussions of world leaders about the abolishing of intellectual property rights of covid-19 vaccines have brought along differences of opinion on this issue.
Will The European Patent System Embrace Grace Periods?
Marks & Clerk
The European Patent Office is conducting a survey of European patent applicants, to assess the impact of the EPO's strict novelty requirement on applicants' disclosure and commercialisation strategies.
EPO Launches Consultation On Grace Periods
J A Kemp LLP
The EPO has launched a user consultation into the desirability of introducing a "grace period" into the European patent system.
Tarilian Laser Technologies – A Case Study In Due Diligence
HGF Ltd
When deciding whether to invest in a company, an investor will inevitably have to decide the value of the company.
FREE News Alerts
Sign Up for our free News Alerts - All the latest articles on your chosen topics condensed into a free bi-weekly email.
Register For News Alerts
Article Tags
Portugal Intellectual Property Trademark
Related Articles
Africa: Patenting Against The Clock Inventa
How The Global Innovation Index Rankings Highlights African Innovation Inventa
How Not To Register Your Sound Mark Inventa
Patenting Activity Before The European Patent Office By Chinese Organizations Inventa
What Has Changed In The IP Over The Last 50 Years? - The Accelerated Synchronization Of The World Inventa
Mondaq Webinars
UK Construction Law Update: What happened in 2021? What can we expect in 2022?
Charles Russell Speechlys LLP
Webinar London UK
New Legislation Paves the Way for the Future of Aviation
HarleyJames Law
Webinar Nassau Bahamas
More Webinars
Comparative Guides
Banking Regulation
Corporate Tax
Cybersecurity
Data Privacy
Litigation Dispute Resolution
More Guides
Mondaq Advice Centres
Global
Trademarks in SAARC Countries
More MACs