A Cantonese company being a pioneer in Karaoke booth designs was recently awarded damages of NT$5 million by Taiwan's IP Court in a passing off case against a Taiwanese company. Guangzhou Aimyunion Network Technology Co., Ltd. v. MINIK Co., Ltd., 108 Min Zhu Su 62, Taiwan's IP Court (April 2020). According to the writer's research, this is the highest damages for IP right infringement Taiwan's IP Court ever awarded to a Mainland Chinese company, although the decision might have been appealed to a second-instance panel of the IP Court as of this writing .

A Karaoke booth, which Aimyunion the plaintiff claimed was its creation, is an air-conditioned and soundproof phone-booth like Karaoke box, typically accommodating two singers. Ready for use once plugged in and Internet-connected, this invention smartly translates karaoke from usually a dim room to literally any public space (mostly shopping malls) while the singer's voice is still confined in a controlled area.

Although the Aimyunion Group seems to hold a strong brand guarded by a horde of IP rights in Mainland China (e.g. the design patent CN201530160659 "Vocal and Recording Booth (Interior)" shown below), it has encountered obstacles upon entering the Taiwanese market. Their house mark (also shown below) has yet to get registered in Taiwan due to several pre-existing registrations (not owned by the defendant in the reported case). Further, there is no record showing the Aimyunion Group has ever filed any patents including designs for any of their karaoke booths, possibly because when it thought of the Taiwanese market the grace period for novelty had lapsed. 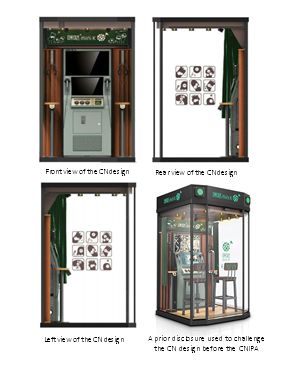 (no yet allowed for registration)

Despite the limited choices of legal claims available in Taiwan, Aimyunion's anti-passing off action in the IP Court proves to be quite successful to this point, because of two reasons. First, the asserted misconduct of the defendant is, according to the judge's findings, exceptionally clear. A similar copy of the said Aimyunion's unregistered trademark was used on each of the 100 strong booths of the defendant, all placed at crowded venues. The Judge (J. Wei-Hwa WU) further found that photos of the Aimyunion's karaoke booth appeared on the defendant's website, Facebook pages, and other advertising materials, together with statements suggesting the defendant was the sole agent for the plaintiff in Taiwan even though there was no evidence showing there ever existed any business ties between the two parties. Besides, as Aimyunion asserted (but not affirmed by the Judge), the defendant's booths were dead copies of Aimyunion's karaoke booth.

The second factor contributing to Aimyunion's record-breaking success is the strategy of having their damages claims rest on the Copyright Act as well as the Fair Trade Act. While both laws are oftentimes cited to protect unregistered trademarks/designs in anti-passing off actions, it is harder to make a copyright case due to the stricter requirements, especially the long-standing aesthetic test which somewhat disfavors mass-produced articles. However, once a copyright claim is approved, more forceful remedies follow. Apart from criminal remedies, damages award in a civil copyright litigation is accorded with more flexibility compared with damages award available under the Fair Trade Act (see the table below).

Following this two-fold claim strategy, Aimyunion made the arguments as the writer briefed in the following table:

It can be seen that critical to Aimyunion's victory is the judge's finding that Aimyunion's unregistered trademark is protectable under both Copyright Law and Fair Trade Act. On the other hand, whether the disputed karaoke booth design can be protected is still an open question, although the judge did raise the functionality bar issue in the test of copyrightability.

Another important point to note is that the NT$5 million damages were awarded under the statutory damages clause of the Copyright Law. In fact, NT$ 5 million is the ceiling amount the Copyright Law allows a judge to grant by exercising his/her discretion in a willful copyright infringement case, and IP Court judges do not hit that ceiling very often. More interestingly, as NT$5 million is also the full amount of damages Aimyunion claimed in this case, the judge did not proceed to address how much more damages Aimyunion was entitled under the Fair Trade Act—suppose he had done so, Aimyunion would have had to prove how much profits it had lost due to the defendant's conduct. Damages award based on Fair Trade Act on top of copyright damages award is possible. As the judge pointed out in the decision, "the legal interests protected by these two laws are not entirely the same, nor are the respective nature and 'position' of damages incurred on the plaintiff." In a sense, with hindsight we could say that the foundation of Aimyunion's victory has been largely laid when it claimed its unregistered house mark is a copyrightable work, even though the mark has yet to overcome obstacles posed by senior marks on its path to registration in Taiwan.

The Karaoke Booth Designs in China

Incidentally, since 2017, Aimyunion Group's designs on karaoke booths have been vigorously attacked before the PRC's National IP Administration (CNIPA) by competitors, who argue that a substantially similar design had been disclosed indirectly by Aimyunion itself on a public WeChat platform three months before the filings of the Aimyunion designs. In Mainland China, for such cases, the grace period for novelty only applies upon a showing that the disclosure is made "by a third party without the applicant's consent." In contrast, in Taiwan, the grace period applies even if the disclosure is made "by the applicant's will," and invention applicants enjoy a 12-month grace period.