by Andersen in Egypt
Andersen- Maher Milad Iskander & Co
To print this article, all you need is to be registered or login on Mondaq.com.

In the last three years Egypt has solidified its position as one of the biggest markets and economies in the Middle East and the Arab world, due to its developed economic, market and social structures and wide labor resources.

In order to enhance economic performance and restore growth, the government has introduced a broad fiscal reform program. Firstly, the Value Added Tax (VAT) system was introduced as a replacement for the General Sales Tax Law, along with an updated version of the Investment Law. Egyptian Companies Law was also amended in order to attract new investments to Egypt, and this was supported by lower customs duties, removal of exchange control restrictions and the floating of the Egyptian pound (EGP).

Although many of these changes aim to simplify the way in which commercial activity is carried out in the country, staying updated with these modifications and comprehending their full impact can be quite a daunting task, particularly since legal and financial mistakes can often have dire repercussions on those who make them. It is therefore necessary to emphasize the importance of working with trusted and experienced legal and tax firms for any specific issues you may have within Egypt.

This guide therefore aims to provide an overview of the Egyptian taxation system, as well as the most common legal forms, which a new company can take.

Geographic Importance -
Egypt controls the Sinai Peninsula, it is the land bridge between Africa and remainder of Eastern Hemisphere; controls the Suez Canal, acts as a sea link between the Indian Ocean and Mediterranean Sea; size, and juxtaposition to Israel, establish its major role in Middle Eastern geopolitics; dependence on upstream neighbors; dominance of Nile basin issues; prone to influxes of refugees from Sudan and the Palestinian territories.

The National Day -
23rd of July

Language -
Arabic is the official language, however, English and French are commonly used in the commercial fields.

Administrative Division -
The Republic is administratively divided into 27 governorates. The governorates are either completely urban, or a blend of urban and rural areas.

Ports -
There are 43 ports in Egypt due to the extension of the coastlines to the north and east, and the most important ones are Alexandria, Damietta, Suez, Port Said and Safaga.

Official Workdays -
Official workdays in the ministries, government departments and general authorities and local administrative units are Sunday to Thursday leaving Fridays and Saturdays as the official weekend.

A country's taxation regime can significantly impact the amount of investment made within it, particularly from foreign investors who may find it more justifiable to do business in their home towns if tax regimes in a particular country are comparatively higher than their domestic tax rates. It is generally accepted that high taxes have an adverse effect on industry level investment; in particular, high corporate taxes reduce investment by increasing the user cost of capital.

With this in mind, there has been a surge to do business in the Middle East in the last decade, where countries offer tax breaks and incentives which are unparalleled in Europe, the USA and Canada. This guide will focus particularly on taxation in Egypt; however comparisons may be made with other countries for ease of reference.

Egypt introduced its first modern tax laws in 1939 which imposed taxes on business and labour gains (Law No. 14 of 1939) and on agricultural land (Law No. 113 of 1939). The current structure of the Egyptian tax system includes both direct taxes and indirect taxes, as follows: 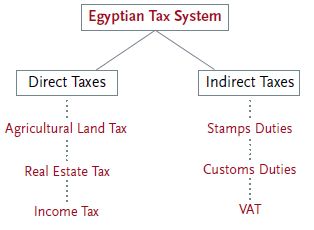 Today, Egypt offers investors competitive tax rates, with many projects even qualifying for tax breaks for their equipment and land. Furthermore, Egypt has signed double taxation treaties with a large number of countries, making the country all the more appealing as a destination for commercial activity. Although the country does still tax personal income, unlike some of its neighbors, new laws have decreased taxation for the top band of income from 25% to 22.5%, which is significantly lower than countries such as the UK (can reach 45%) and Sweden (can reach 36%).

The New Investment Law which was introduced in 2017 also provides a number of incentives and tax deductions particularly for greenfield investments.

To read this Summary in full, please click here.