by Crowe Horwath First Trust
Crowe Horwath
To print this article, all you need is to be registered or login on Mondaq.com.

OTHER TAX CHANGES FOR BUSINESSES AND INDIVIDUALS

Donors are eligible for a 250% tax deduction for qualifying donations made to Institutions of a Public Character ("IPCs") and other qualifying recipients (such as approved museums, prescribed educational institutions) from 1 January 2009 to 31 December 2015.

The tax deduction rate for qualifying donations made to IPCs and other qualifying recipients in 2015 will be increased from the current 250% to 300%.

The tax deduction will revert to 250% for qualifying donations made from 1 January 2016 to 31 December 2018 to IPCs and other qualifying recipients.

Section 10(16) of the Income Tax Act provides a tax concession to:

The income derived by such an individual or company from royalties or other payments received as consideration for the assignment of or the rights in the approved intellectual property or innovation shall be deemed to be:

GST remission is granted to listed REITs, and listed RBTs in the infrastructure business, ship leasing and aircraft leasing sectors, to allow them to claim GST on their business expenses regardless of whether they hold underlying assets directly or indirectly through multi-tiered structures such as special purpose vehicles ("SPVs") or sub-trusts. The GST remission is scheduled to lapse after 31 March 2015.

The existing GST remission will be extended till 31 March 2020. In addition, REITs and RBTs qualifying under the current GST remission will be allowed to claim GST on business expenses incurred to set up SPVs that are used solely to raise funds for the REITs or RBTs, and which do not hold qualifying assets of the REITs or RBTs, directly or indirectly. These REITs and RBTs will also be allowed to claim GST on the business expenses of such SPVs. The enhancement to the GST remission will take effect for GST incurred from 1 April 2015 to 31 March 2020.

Generally, GST-registered businesses can only claim pre-registration GST on the portion of goods and services used or to be used to make taxable supplies after GST registration.

A newly GST-registered business will be allowed to claim pre-registration GST in full on the following goods and services that are acquired within six months before the GST registration date of the business:

This will take effect for businesses that are GST-registered from 1 July 2015. IRAS will release further details of the change by June 2015.

The WCS will be extended for 2016 and 2017, with the Government co-funding at 20% of the wage increases given to Singaporean employees earning a gross monthly wage of $4,000 and below.

This co-funding will apply to wage increases given in 2016 and 2017, over the employee's wage level in the preceding year. In addition, if wage increases given in 2015 are sustained in 2016 and 2017, employers will continue to receive co-funding, at the new rate of 20%. Employers do not need to apply for Wage Credit. They will receive their yearly payout automatically, at the end of March 2015, 2016, 2017 and 2018.

The table below shows a summary of the changes to the WCS under the extension: 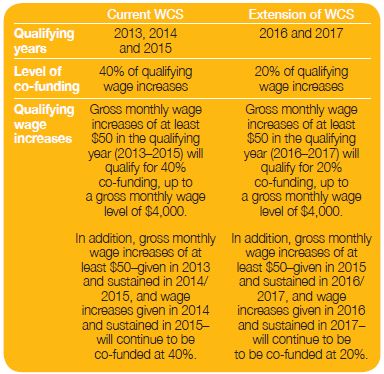 Extension and Enhancement of the Temporary Employment Credit ("TEC")

The TEC will be enhanced by:

Employers of workers earning above the CPF ceiling will receive TEC that corresponds to the CPF contributions payable at the CPF salary ceiling.

To promote voluntary re-employment of older Singaporean workers, the Government is providing employers with an additional SEC of up to 3% of wages for workers aged 65 and above in 2015. This is on top of the 8.5% wage offset that employers will receive in 2015.

The table below provides the monthly SEC amounts for wages paid in 2015 for employers who hire Singaporeans aged 65 years and above. 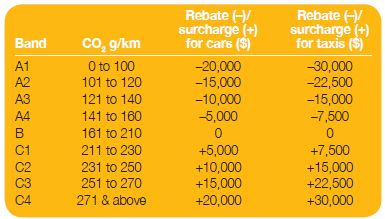 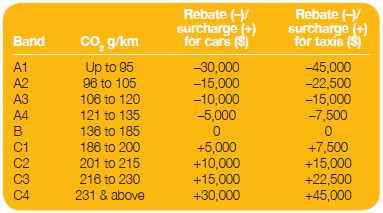 The current petrol duty rates introduced in 2003 are:

The petrol duty rates will be updated as follows:

Road tax payable is based on the engine capacities for cars and motorcycles and based on maximum laden weight for commercial vehicles. Road tax for taxis is $1,050 per year.

A one-year road tax rebate will be provided for petrol vehicles:

ARTICLE TAGS
Singapore Tax Income Tax Sales Taxes: VAT, GST
POPULAR ARTICLES ON: Tax from Singapore
Tax Issues In M&A Transactions
Nishith Desai Associates
The Indian Income Tax Act, 1961 ("ITA") contains several provisions that deal with the taxation of different categories of mergers and acquisitions.
Intellectual Property Tax Regime In India
Khurana and Khurana
The relevance of intellectual property as an asset has just surged in the last few decades and has become a strong foot for the economic development of the nations.
Tax debts are at a record high – how do you respond if the ATO sues you for a tax debt that you disagree with?
Cooper Grace Ward
Even if it is a genuine dispute about a tax liability, the ATO can take steps to recover the amount in the assessment.
Taxation On Royalty And Fee For Technical Services On Foreign Companies In India
ARA LAW
With increased globalization and the growth of information technology, the import of technical know-how, acquisition of software and technical services is not very uncommon in developing economies like ours.
Role Of Permanent Establishment Vis-A-Vis Indian Laws
King, Stubb & Kasiva
One of the most important aspects of a treaty-based law or Double Taxation Avoidance Agreement (DTAA) is the existence of a Permanent Establishment (PE).
Taxing Provision Related To IP Right In India: A Brief Look
Singh & Associates
Tax on income is a way to finance the public expenditure.
FREE News Alerts
Sign Up for our free News Alerts - All the latest articles on your chosen topics condensed into a free bi-weekly email.
Register For News Alerts
Article Tags
Singapore Tax Income Tax Sales Taxes: VAT, GST
Related Articles
Singapore's Transfer Pricing Guidelines For COVID-Affected Businesses Mayer Brown
Singapore Issues New Guidance On Tax Residency & Permanent Establishments Mayer Brown
Draft Tax Bill In Singapore Seeks To Implement COVID-19 Related Tax Measures; Proposes 50% Surcharge On Tax Avoidance Withers LLP
Regulatory Update On GST Treatment Of Digital Payment Tokens CNPLaw LLP
Regulatory Update On Income Tax Treatment Of Digital Payment Tokens CNPLaw LLP
Mondaq Webinars
Securitisation in Luxembourg – A Vibrant Market with a Flexible Toolbox
GSK Stockmann SA
Webinar Luxembourg Luxembourg
Arbitration is Common and Civil
OBLIN Attorneys at Law LLP
Webinar Wien Austria
More Webinars
Comparative Guides
Blockchain
Enforcement of Foreign Judgments
International Arbitration
Mondaq Advice Centres
Global
Trademarks in SAARC Countries
Global
Investment Immigration
More MACs
Curated Content
A Framework For Examination Of Personal Devices Under The Turkish Competition Authority's New Guidelines – How It Converges With And Differs From The EU Practice
ELIG Gürkaynak Attorneys-at-Law
Digital Securities Business Is About To Bloom
Anderson Mori & Tomotsune
A Different Perspective To Employer`s Liability For Anti-Competitive Behaviors: Arçelik's Application For Leniency
ELIG Gürkaynak Attorneys-at-Law
Losing The Battle, Winning The War? – Ramifications Of The Newly Introduced Settlement Mechanism Under Turkish Competition Law
ELIG Gürkaynak Attorneys-at-Law
Upcoming Events
Mondaq Social Media