by Joseph Huse and Helen Cook
Freshfields Bruckhaus Deringer
To print this article, all you need is to be registered or login on Mondaq.com.

Nuclear power is increasingly being seen as the energy of the future. Most established nuclear markets have considerable nuclear new build plans. Recent statistics from the International Atomic Energy Agency (IAEA) indicate that 60 states have expressed an interest in or are actively planning to introduce nuclear power.1 Almost every state in the Middle East and North Africa (MENA) region is included on this list.

This guide provides an update on the status of the most advanced nuclear power programmes in MENA.

Why are the MENA states interested in nuclear power?

Given that the MENA region has a substantial percentage of the world's oil and gas reserves, it is important to examine the key drivers behind this region's interest in developing nuclear power. These drivers give an important context in which to consider each individual programme, bearing in mind that not every MENA state is rich in oil and gas and that motivations differ from state to state.

Factors driving an interest in nuclear power in MENA include:

While all the nuclear power programmes in MENA are at different stages of development, they share the important characteristic that nuclear new build in each state will be nuclear new build for the very first time. Each state must develop the infrastructure needed for a nuclear power programme entirely from scratch. This is a complex task, with significant challenges to be overcome.

The United Arab Emirates (UAE) regards nuclear power as an energy source that is a 'proven, environmentally promising and commercially competitive option which could make a significant base-load contribution to the UAE's economy and future energy security' (Policy of the UAE on the Evaluation and Potential Development of Peaceful Nuclear Energy, 2008) (the Policy).

With demand for electricity over the next 10 years forecast to grow at a rate of 9 per cent per year, nuclear power has become a key component of the UAE's long-term energy strategy.

Six key principles that underpin the UAE's nuclear development programme (as set out in the Policy):

The UAE's nuclear power programme is developing at an unprecedented pace. The contract to supply and construct the first four reactors (of a planned 14) was awarded to a South Korean consortium, led by KEPCO, in December 2009. The UAE's first commercial nuclear power plant is expected to be operational by 2017.

On 4 October 2009, UAE Federal Law No. 6 of 2009 concerning Peaceful Uses of Nuclear Energy (the UAE Nuclear Law) was passed. The UAE Nuclear Law provides a framework for developing a civil nuclear power programme in the UAE. Significantly, the UAE Nuclear Law establishes the state's nuclear regulatory authority, the Federal Authority for Nuclear Regulation (FANR), and gives it powers to regulate the nuclear sector in the state. FANR is supported by the Korean Institute for Nuclear Safety and is expected to draw on the experience of the US Nuclear Regulatory Commission.

The UAE Nuclear Law prohibits any enrichment or reprocessing facility from being designed, constructed, developed or operated in the state. This provision gives domestic legal effect to the UAE's Section 123 Agreement with the US, pursuant to which it agreed not to carry out these nuclear fuel cycle activities.

The table below shows the status of the adoption of international nuclear instruments in the UAE. 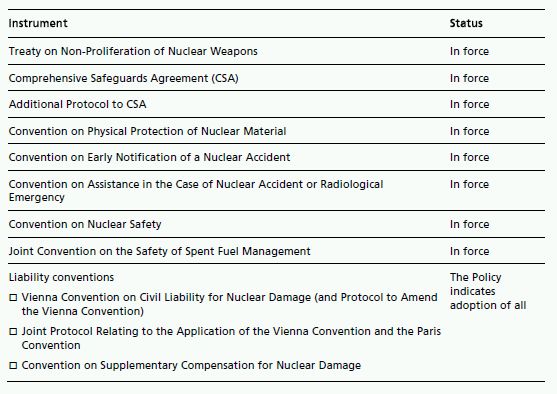 The Construction Licence Application for UAE Nuclear Power Plants Units 1 and 2 was submitted to FANR on 28 December 2010.

The Gulf Nuclear Energy Infrastructure Institute (GNEII) – which will be associated with the Khalifa University of Science, Technology and Research – is an example of Abu Dhabi's early planning to develop human resources. GNEII will be supported by the US Sandia National Laboratories and the Nuclear Security Science and Policy Institute at Texas A&M University, as well as by ENEC and FANR. 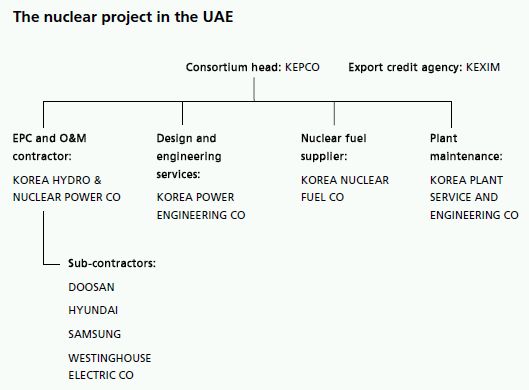 Jordan imports approximately 95 per cent of its energy needs. The state's plan to introduce nuclear power calls for nuclear energy to generate 30 per cent of the country's electricity by 2040. Central to this plan is making use of Jordan's natural uranium assets and using nuclear energy for water desalination.

These laws set out the respective competencies of JAEC and JNRC. Neither of these laws provides a comprehensive legislative framework for bringing nuclear power into Jordan and it is understood that JNRC is in the final stages of drafting a new law. A series of implementing regulations is also being drafted.

The table below sets out the current status of international instruments in Jordan. 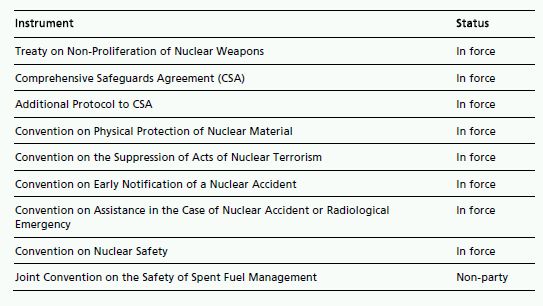 In September 2009, JAEC contracted Tractabel Engineering, a subsidiary of GdF Suez, to undertake a two-year siting study near the Gulf of Aqaba. JAEC recently announced that the site of the first plant may be moved to the centre of the country, approximately 40km north-east of Amman. Water for reactor cooling will reportedly be supplied from the Khirbet Al-Samra waste water treatment plant.

In late 2009, JAEC appointed Worley Parsons as the technical adviser for Jordan's programme, tasked with choosing the technology for the first nuclear plant.

Three reactor vendors and designs were shortlisted in May 2010, as shown in the table below.

A consortium comprising Korea Atomic Energy Research Institute and Daewoo Engineering and Construction will build a 5MW nuclear research reactor at the Jordan University of Science and Technology.

Egypt has been considering developing a civilian nuclear power programme for approximately 60 years. Egypt set up its Atomic Energy Authority (AEA) in 1955. It had plans in the 1970s to build 10 nuclear power plants by 1999. Egypt's refusal to ratify the Treaty on the Non-Proliferation of Nuclear Weapons until 1981 meant that these ambitious plans were never realised. Egypt anticipates that it needs more than 57GW of power by 2027 and has developed an energy policy that includes nuclear and renewable energy.

Following a feasibility study in 2006, the decision was taken, by presidential decree in October 2007, to proceed with a national nuclear power programme. The programme involves building four nuclear power plants by 2025. The Egyptian Nuclear Power Plants Authority (NPPA) is the development corporation.

The Egyptian Nuclear Law establishes the Nuclear and Radiation Control Authority (NRCA) and transfers existing functions and employees from the AEA to the NRCA.

The table below sets out the status of international nuclear instruments in Egypt. 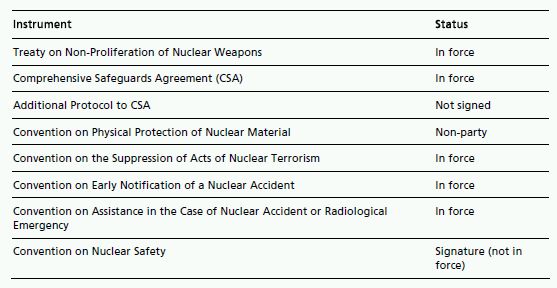 In June 2010, Egypt's NPPA signed a management contract with Worley Parsons in relation to the country's first nuclear power plant. Under the contract, Worley Parsons is responsible for selecting the reactor technology, choosing the site for the plant, training personnel and giving technical support.

There are five possible sites for the plants under consideration. An early site permit for the El-Dabaa site is expected to be issued in six months.

The NPPA was expected to launch the formal tender to supply and build the first nuclear power plants by the end of 2010. The first plant is expected to be operating by 2019.

Fast-growing demand for power in Saudi Arabia is forcing the Kingdom to look at all possible sources of energy. In August 2009, Saudi Arabia formally announced that it was considering implementing a nuclear power programme. This announcement was followed in April 2010 by Royal Decree No. A/35 dated 3/5/1431 AH Concerning the Establishment of King Abdullah City for Nuclear and Renewable Energy (the Decree), which states that 'the development of atomic energy is essential to meet the Kingdom's growing requirements for energy to generate electricity, produce desalinated water and reduce reliance on depleting hydrocarbon resources'.

The Decree sets out plans to establish the King Abdullah City for Atomic and Renewable Energy (KA-CARE), designed to develop alternative energy sources, including nuclear power, by 'setting and implementing the national policy of nuclear and renewable energy'.

Key objectives of KA-CARE (as set out in the Decree):

A 13-member Supreme Council will oversee the development of KA-CARE. The departments concerned with nuclear and renewable energy that are currently within the King Abdulaziz City for Science and Technology will be transferred to KA-CARE.

Under the Decree, KA-CARE will have an independent annual budget and will be exempt from tax and custom duties for the equipment and machines it imports for its scientific activity.

The Pöyry consultancy firm is to draft a renewable and nuclear strategy for KA-CARE. The legal and regulatory infrastructure will need to be developed.

The table below sets out the status of international nuclear instruments in Saudi Arabia. 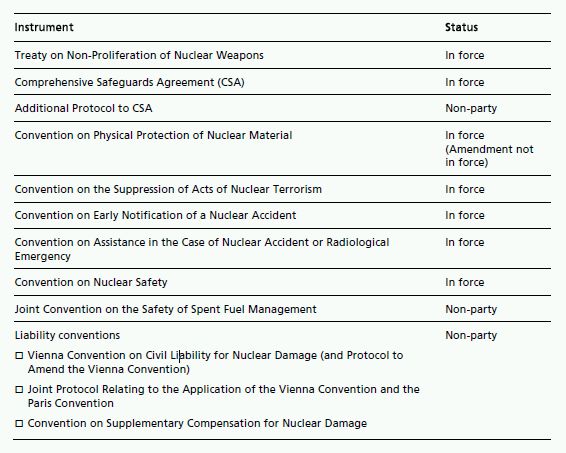 As the summary below shows, in addition to the states overviewed in this briefing almost every other state in the MENA region is developing a nuclear power programme. 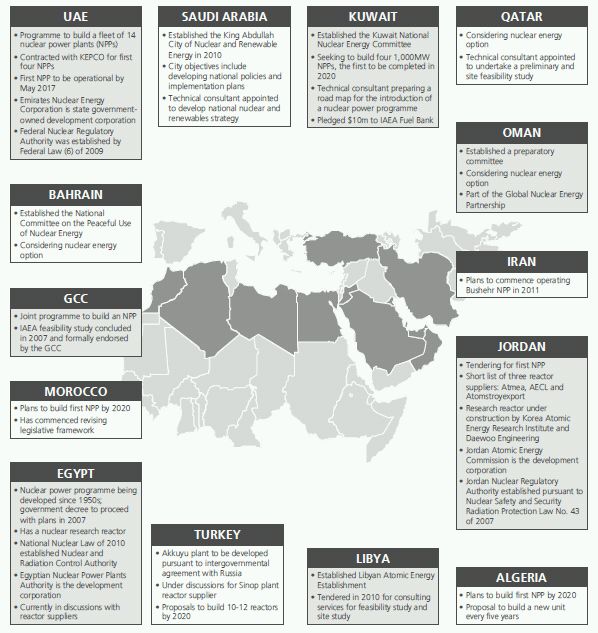