Nigeria: The Petroleum Industry Act, 2021 – What Next For Upstream Players?

The newly enacted Petroleum Industry Act, 2021 (PIA) provides for the overhaul of the institutional, regulatory and fiscal framework for Nigeria's petroleum industry. Amongst the key changes introduced by this reform legislation is the new licensing and fiscal regime for upstream operations. However, Oil Prospecting Licences (OPLs) and Oil Mining Leases (OMLs) granted under the Petroleum Act do not automatically transition into this new regime. The PIA allows holders of OPLs and OMLs granted under the Petroleum Act to opt in to the new regime by converting their respective OPLs and OMLs into an appropriate licence or lease to be issued under the PIA. Key considerations for upstream operators at this time in determining whether to exercise the right to opt in are the fiscal framework and the downsizing of the licence or lease acreages within their portfolio. There are bound to be trade-offs in deciding whether to opt in to the PIA regime and upstream businesses must at this time evaluate the best course of action to take in respect of each licence or lease they currently operate; perhaps based on the inherent peculiarities of the geological formations within those assets and the best value that can be derived from exploiting those assets under the erstwhile or the new fiscal regime offered in the PIA.

This publication highlights for the benefit of upstream players currently holding interests in OPLs, OMLs, Production Sharing Contracts (PSCs) and Marginal Field assets, the fiscal regime ushered in by the PIA and the streamlined asset retention framework, to aid their election on whether to opt in to the PIA regime.

The PIA renames the existing licences and lease concessions by replacing 'Oil' with 'Petroleum', such that Oil Exploration Licences are now Petroleum Exploration Licences (PEL) while Oil Prospecting Licences are to be known as Petroleum Prospecting Licences (PPL), and Oil Mining Leases are now Petroleum Mining Leases (PML). This change in nomenclature is to better represent the mature status of gas as a standalone resource and an independent target for investors. A new national grid system has also been introduced that breaks down the surface areas for concessions into 1 square kilometre units and 1-hectare subdivisions.

The key difference between the outgoing and the new concessions are the sizes. There is a significant reduction in the overall surface area granted and retained under PPLs and PMLs as against the OPLs and OMLs. 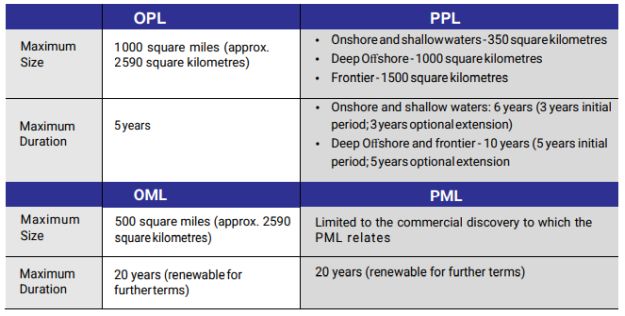 The size of the concessions under the PIA are further reduced by a relinquishment regime that reduces the surface are as retained by a PPL or PML holder.

For a PPL holder, there are a number of instances where it would have to yield back to the government parts of the surface area of the licence:

The PML is granted upon approval of a field development plan in respect of each commercial discovery within a PPL. The PML holder must thereafter commence commercial production within 5 years for onshore acreages and 7 years for shallow water, deep offshore and frontier acreages, failing which the lease would be recommended to the Minister of Petroleum Resources for revocation. Also, within 10 years of commencement of the PML, all parcels of the lease that fall outside the boundary of a producing field will be relinquished.

Bite-size Chunks: In effect, a concessionaire could progress from an initial PPL surface area size of 350square kilometres to only a few square kilometres under a PML such that PMLs will now ultimately be reduced to cover only the individual commercial fields being produced. It would therefore seem that the objective of the PIA is to deter asset owners from holding on unproductively to huge tracts of lease areas as in the large parcels (1,295 square miles) held under the outgoing regime.