Nigeria: A Critical Review Of Upstream Provisions Of The Federal Government’s Latest Comments On The Petroleum Industry Bill (Part 1)

The Petroleum Industry Bill, which promises to change the landscape of Nigeria's petroleum industry was submitted by the Executive Branch of the Federal Government to the National Assembly in December 2008. The Bill, which has passed through the first and second readings in both houses of the National Assembly, was referred to the relevant committees and public hearings have been held by the Senate and the House of Representatives on the Bill.

Various entities submitted memoranda to the National Assembly to address shortcomings of the Bill. A memorandum was also submitted by the Executive Branch of the Federal Government, through the Inter-Agency Team1, proposing to address some of the deficiencies in the Bill. The Memorandum was in the form of a new draft Petroleum Industry Bill. Whilst, there is technically no problem with such a submission, it is at the very least, highly unusual for the Federal Government to be seeking to amend the provisions of the Bill it originally sent. The breadth of the proposed revisions is quite substantial and includes for example broad changes to the fiscal and institutional frameworks. It is based on the background of the significance of these changes, as well as our opinion, that the National Assembly would give careful consideration to the contents of the Inter-Agency Memorandum, that this paper has been written.

The article is divided in to two both of which focus only on the upstream aspects of the Inter-Agency Memorandum and the proposed draft Petroleum Industry Bill2. The fiscal aspects would be addressed in another article. The articles draw comparisons between the Official Version & Version IV and also refer to the existing legal framework. This first part deals with the institutional elements of the upstream proposals.

Institutional Framework under the Official Version 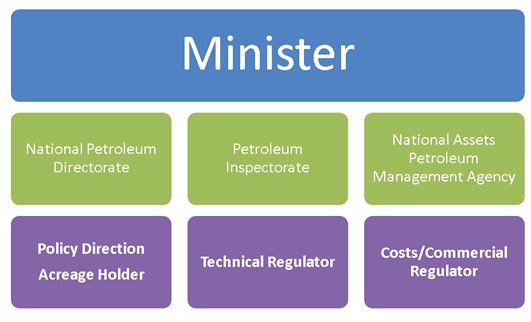 Version IV significantly changes this framework. Whilst the functions of the Minister and the NPD do not change significantly, Version IV abandons NAPAMA and places the cost/commercial function within the Inspectorate3. The Inspectorate would exercise this function in the approval of "...commercial and cost elements of all field development programmes..."4 The Inspectorate would also be responsible for developing "cost benchmarks for the evaluation of opportunities in the Upstream Petroleum Operations"5 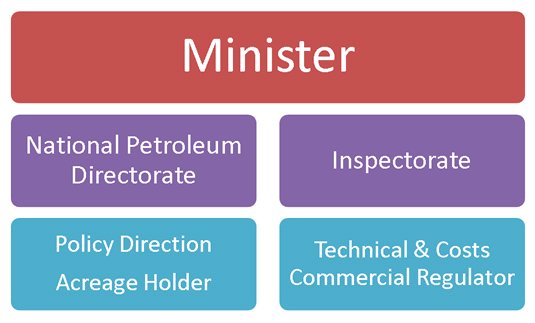 COMMENTS ON THE PROPOSED CHANGES TO THE INSTITUTIONAL FRAMEWORK

The changes proposed to the upstream institutional framework by Version IV should help in strengthening the Bill. By housing the costs/commercial function in the Inspectorate, it avoids the problems associated with having multiple regulators such as high regulatory costs and excessive bureaucracy. Additionally, by placing the costs/commercial function in the work commitment & field development process, the ambiguities raised under the Official Version as to the extent of this form of regulation have been minimised.

Version IV also proposes the establishment of NNPC Ltd to replace the Nigerian National Petroleum Corporation ("NNPC"). Like its predecessor, Version IV does not place a positive duty on any entity to create the company.6 This is an oversight which should be corrected at the National Assembly. Version IV also states that ownership of NNPC Ltd. should be vested solely in the Federal Government of Nigeria. Under the Companies and Allied Matters Act ("CAMA") which regulates limited liability companies in Nigeria, each company is required to have at least two shareholders7. It is suggested therefore, that it would be useful for the Bill to name the specific shareholders which it proposes to hold shares in the company or to detail the process by which those entities are determined.

Version IV made notable amendments with respect to incorporated joint ventures ("IJVs"). Under section 260(3) of Version IV, the National Oil Company may appoint a majority of members to the Board of Directors, where it is the majority shareholder. Under the existing participating joint venture framework ("PJV"), the joint operating committee ("JOC") acts to supervise joint operations under the PJV. The JOC is constituted according to the interests of the parties, which inevitably means that NNPC has majority interest. However, the decisions of the JOC are taken unanimously11, which effectively serves to protect the minority. Version IV does not speak to the voting power of the directors, therefore the Articles of Association of the Company or any shareholder's agreement may address this issue.

Section 260(6) provides for the decision of the board of directors of the IJVs to comply with the decisions taken in the shareholder's meetings. This appears to contradict the provisions of CAMA, which place a fiduciary duty on company directors.12

Section 260(10) provides that NNPC ltd shall have the rights to appoint more than 50% of the management team. This right of appointment is not tied to the shareholding of the NNPC Ltd in the IJV and there is an additional requirement that 80% of the management of each IJV must be Nigerian.

One of the objectives of creating the IJV structure was to create self-funding institutions, which would not need to rely on government funds to run their operations. Section 261(2) which provides that the shares of NNPC Ltd in any of the IJVs may not be transferrable by way of sale, assignment, mortgage or pledge, may have a negative impact on the actualisation of this objective. By including such a restriction in the law, it removes flexibility from decision makers and does not allow them to effectively respond to the facts on the ground. It significantly limits the financing options which may be utilised in seeking operational funds. Version IV further extends those restrictions to other shareholders in the IJVs who may not transfer their shares without the written consent of NNPC Ltd.13 It does not provide for such consent not to be unreasonably withheld nor does it provide for a time frame within which the consent must be granted or refused. This would significantly hamper commercial decision making.

Section 263 seeks to protect the shareholders of the IJV from incurring any additional tax liabilities provided all assets are transferred to the IJV at net book value. It does not offer similar protection in terms of company registration fees at the Corporate Affairs Commission ("CAC"), which are likely to be significant in view of the potential assets of these IJV companies.

Version IV also introduces special provisions with respect to the liquidation of the IJVs. It provides for the process by which liquidation may take place and for disposal of the assets of the IJV. Of particular concern is the provision which requires that all the assets of the IJV, whether tangible or intangible, real or personal shall only be transferred to NNPC Ltd in liquidation. In view of the fact that the law provides for a single buyer, there is no room for competition in selling these assets and the shareholders are effectively stuck with the valuation placed on them by NNPC Ltd. It also places significant pressure on NNPC Ltd. in terms of arranging financial commitments for the acquisition (or re-acquisition) of such assets, as well as effective application/management of such assets post liquidation.

COMMENTS ON THE IJV PROVISIONS

It appears that the Inter-Agency team in its proposals sought to provide extensive protections for the State in these IJV vehicles. In doing so however, these provisions appear to create an entity unrecognisable under Nigerian law – a hybrid, if you will, of the typical state corporation and the limited liability company. The provisions entrench rules in favour of the majority and do not appear to be concerned about minority protections. It is suggested that a number of the State protections are better dealt with within a Shareholders' Agreement or the Articles of Association of the IJV. This method would allow for flexibility as it is difficult to amend legislation once it is passed.

It is also useful to note that in a number of areas, there are gaps in the provisions, which may be addressed by Shareholders' Agreements. For example, if the provisions of Version IV were adopted and passed into law as is, it may be necessary for a Shareholders' Agreement to require NNPC Ltd. to pay market value as determined by an independent consultant for the assets transferred in liquidation.

This article is concluded in the second part of the paper.

3. This Author has previously argued for the abandonment of NAPAMA as the role of the agency was unclear and was likely to add a bureaucratic layer to upstream petroleum industry regulation. See "Highlights of Aspects of the Petroleum Industry Bill" a paper presented at the Nigerian Association of Energy Economics Conference in Abuja 2009 – www.odujinrinadefulu.com/

6. It only states that if the company has not been created after 3 months of the passage of the Act, the government should cause its creation.

12. The duty of a director is to the company and not to the person whose nominee he is. See Orojo, Company Law and Practice in Nigeria, at page 310.

To read Part 2 of this article please click here.