Nigeria: What Next For Nigeria's Economy?

by Andrew S. Nevin
PwC Nigeria
Your LinkedIn Connections
with the authors

Nigeria in the eye of the storm

In the months leading up to January 2015, the price of oil fell by 60% driven down largely by booming shale oil production, the drop in energy demands from emerging markets and the strengthening of the US dollar. By late-January of 2015, Brent Crude traded at around $50, hitting its lowest-levels since the global financial crisis in 2009. Prices however recovered to around $60-65 by the end of the first quarter of 2015 – but this still represents a major adjustment from the $90-110 average price levels we've seen over the last five years.

For net oil exporters like Nigeria, the effect of this price adjustment has been far reaching on the economy with government revenue declining rapidly, foreign investors exiting the domestic market and putting pressure on the Naira. Oil as is common knowledge is Nigeria's main source of foreign exchange earnings and government financing. The impact of the oil price drop on the economy has led to downward adjustments of growth expectations with the Ministry of Finance reversing growth projections for 2015 from 6.4% at the start of 2014 to 5.5%.

We expect however that even under a benign economic scenario, the Nigerian economy will struggle to realise growth much higher than 4.0%. This projection is based on in-depth research and economic modeling by economists at PwC and contained in the latest Nigerian Economy Watch report which presents PwC's economic scenarios for Nigeria in 2015 and 2016.

It is important to note that while there is still some growth, the fall in growth level imposes a real 'human' cost on the population hence the need to get the policy response right. In our World In 2050 analysis, we expect GDP per capita to hit $10,000 in Nigeria in 2030 – just a one percentage point slower growth rate per year would see this development threshold delayed by almost a decade, to 2038.

The possible scenarios and outcomes

We explored two types of shocks in the report: an oil price shock and a political shock. The first scenario looks at oil price averaging $55/bbl over 2015 and stabilising at $70/bbl in 2016 with a smooth transition and maintenance of political stability in the country. Scenario 2, envisages the re-emergence of Iran oil production in Q2 of 2015 which could drive oil prices to as low as $35/bbl and reaching a new equilibrium level of $60/bbl in 2016 consistent with the most bearish forecasts from analysis. The third scenario follows a similar pattern as scenario 2 with oil prices averaging $45/bbl in 2016 in addition to severe political or security shock arising from escalation of Boko Haram insurgency and/or resurgence of restiveness in the Niger Delta. 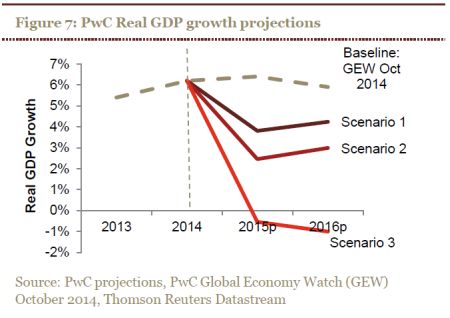 The result of our study indicate that while the economy will continue to struggle even under the most optimistic scenario, there will continue to be growth in the economy even if oil prices fall to $35/bbl and average just $45/bbl in 2015. However, we expect that a deterioration of the political and security landscape could unnerve investors and tip the country into recession. If a 'medium' political shock occurs against the backdrop of a severe oil price scenario, Nigeria's economy could see zero growth or even contract by in 2015 and again in 2016.

Gross government oil revenues will fall dramatically from their 2013 level: by $21bn alone in Scenario 1 (equivalent to a 50% decline) if recent oil production trends continue. In this case, a $ 5bn revenue shortfall is likely to emerge in 2015 compared to the outgoing administration's Budget calculations.

This financing hole could widen to $10bn in Scenario 2, where significant debt issuance and cuts to recurrent expenditure will be needed. State governments could struggle to borrow on financial markets or pay their workers. Some highly-indebted states may miss planned interest payments on their debt.

In scenario 3, we assume that oil production would fall by 15% through bunkering and other supply disruptions. Gross oil revenues would fall to a third of their 2013 level. Combined with difficulties administering tax collection from unstable parts of the country, we would expect the federal government to fall over three months behind on paying employee wages and government bond yields on US$-debt could approach 20%

The effect on the exchange rate and inflation is also telling. If the oil price continues to stabilise, the CBN's recent adjustment of the exchange rate regime will be sufficient to ease pressure on the Naira in 2015. If oil prices deteriorate further, we expect that a further 10% devaluation of the Naira will be necessary in 2015. Inflation is likely to accelerate as the Naira depreciates given Nigeria's heavy reliance on imports. While some of this inflationary pressure will be offset by falling domestic fuel prices and lower rates of GDP growth, we expect inflation to be at least 3 percentage points higher than in 2014.

How policy makers and business leaders can prepare and respond

These scenarios present important issues to consider for all organisations (public and private) exposed to Nigeria. Each scenario can be viewed as an escalation of the previous one. So understanding the tipping points between them – where 'linear' economic growth (i.e. in Scenarios 1 and 2) spills over into a 'non-linear' crisis (i.e. Scenario 3) – can be a critical leading indicator. Usually, tipping points are either event driven or threshold driven, that is economic thresholds that once approached or breached, pose a systemic risk to investor confidence.

In Nigeria, the most prominent potential tipping points are related to the evolving security environment in response to the April general elections. This could be seen in escalation of Boko Haram insurgency or a return of militancy in the Niger Delta. While there is some optimism following gains by the military, the situation remains vulnerable and public and private organisations should stress-test their business plans against alternative scenarios.

Policy makers can help mitigate the potential impact on the economy should a crisis situation materialise even though they have limited influence in the short term. On the monetary policy side, the central bank will need to take the lead in closely scrutinising the evolving risk environment. The Government can also take responsibility for developing a set of priorities for federal and state expenditure, aligned to the national development plan.

In the longer-term, Nigeria's policymakers should aim to encourage a more resilient economic model, learning the lessons from this period and building an economic strategy fit to harness the country's strong growth fundamentals, particularly that of a young, entrepreneurial and increasingly well-educated workforce. A first priority should be to restore fiscal credibility by widening the tax base – Nigeria currently has one of the narrowest in the region and distributing the benefits of the country's oil endowment more evenly across the population.

As Nigeria moves up the development spectrum, and a middle-class flourishes, the 'contract' these citizens enter into with their government will be very different to previous generations, demanding better quality education, health care and infrastructure. The actions policy makers take in the prevailing situation will be crucial in determining whether the country can fulfill these expectations over the coming years.

A copy of the Nigerian Economy Watch report is available for download at http://www.pwc.com/ng/en/publications/economic-watch-may-2015.jhtml

ARTICLE TAGS
Nigeria Energy and Natural Resources Oil, Gas & Electricity Finance and Banking Commodities/Derivatives/Stock Exchanges Strategy Economic Analysis
POPULAR ARTICLES ON: Strategy from Nigeria
Procedure For Registration Of Cooperative Society In Nigeria
Fred-Young & Evans
A Cooperative Society is a voluntary association of individuals, united by common bond, who have come together to pursue their economic goals for their own benefits.
Doing Business In Nigeria: Some Of The Incentives Available To Investors
Banwo & Ighodalo
Given Nigeria's vast human and natural resources (which position her as a frontier market and potential investment haven) and against the background of the recent rebasing of her GDP (which resulted in her emergence as Africa's largest economy), ...
Nigeria Government Releases Official Gazette On List Of Pioneer Industries And Products
Deloitte Nigeria
The Nigerian Investment Promotion Commission (NIPC) recently announced the release of an official gazette (the Gazette) of the list of pioneer industries and products.
Jumpstart: Establishing A Business In The UAE
Gowling WLG
We live in strange times but the UAE continues to innovate and actively engage in attracting business to the UAE and the regulatory framework encourages the establishment of new businesses.
5 Steps To Start A Business That Lasts
Abou Naja
An infinite number of businesses continuously contribute billions of dollars to the global economy. However, not every business is positioned to be successful.
The Platform Economy Series: Platform Access Terms And Conditions
ENSafrica
"You may be thinking: but my company isn't a software company. That may be the case, but the current business environment requires all leaders to view their companies as software businesses...
FREE News Alerts
Sign Up for our free News Alerts - All the latest articles on your chosen topics condensed into a free bi-weekly email.
Register For News Alerts
Article Tags
Nigeria Energy and Natural Resources Oil, Gas & Electricity Finance and Banking Commodities/Derivatives/Stock Exchanges
Strategy Economic Analysis
More Tags
Related Articles
The Agile Transformation Of Organizations, A Cultural Change Above All Mazars
Art Collection - A Sustainable Tool For Wealth Accumulation And Preservation Andersen Tax LP
Nigeria's 2021 Budget Of Economic Recovery And Resilience PwC Nigeria
Quick Commentary - Key Changes Introduced By The Courier And Logistics Services (Operations) Regulations 2020 TNP
Q1'20 GDP Report: Broad-based Shocks To Global Economy Weighs On The Country's Growth PwC Nigeria
Mondaq Webinars
UK Construction Law Update: What happened in 2021? What can we expect in 2022?
Charles Russell Speechlys LLP
Webinar London UK
New Legislation Paves the Way for the Future of Aviation
HarleyJames Law
Webinar Nassau Bahamas
More Webinars
Comparative Guides
Aviation Finance
Corporate Governance
FinTech
Insurance
International Arbitration
More Guides
Mondaq Advice Centres
Global
Trademarks in SAARC Countries
More MACs