Ireland: The EIIS: The Shining Star Amongst A Sea Of Faded Tax Reliefs

In this article, Shane O'Donovan ACA, AITI, Tax Manager with PKF O'Connor, Leddy & Holmes, talks about how you can obtain tax relief through the EIIS.

Over the past eight years we've seen a number of tax reliefs abolished and the attractiveness of many other tax reliefs being limited by the high earners restriction. One of the few tax reliefs that remains is the Employment and Investment Incentive Scheme ("EIIS"). The EIIS was introduced by Finance Act 2011 and replaced the Business Expansion Scheme which had been in operation since 1984.

The EIIS is designed to encourage investment by individuals in small- and medium-sized companies. The EIIS allows an individual investor to obtain income tax relief on investments up to a maximum of €150,000 per annum in each tax year up to 2020. Individuals will qualify for EIIS relief if they subscribe for eligible shares in a qualifying company. Tax relief is given by means of a deduction from the qualifying individual's total income. Individuals will get relief as follows:

At the end of the four-year holding period, it is possible for the investor to receive their initial investment back, provided the company has sufficient funds to repurchase the shares issued to the investor.

The benefits of the EIIS are illustrated in Table 1: 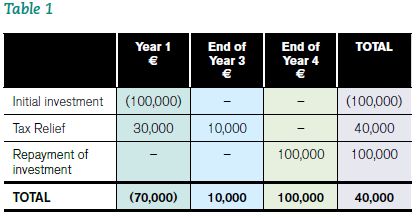 This scheme is available to the majority of small-and medium-sized trading companies, including pharmacies. Companies must use the equity raised for the purpose of carrying on relevant trading activities.

In addition, an individual will be connected to a company if they own (or is entitled to acquire) more than 30% of the ordinary share capital of the company.

However, an individual will not be deemed to be connected with a company if the aggregate of all amounts subscribed for the issued share capital and loan capital of the company does not exceed €500,000.

The lack of traditional bank finance available to small- and medium-sized enterprises (SMEs) continues to be an issue in Ireland. As a result of this, many businesses are missing out on growth opportunities as they cannot source the required funding. The EIIS offers companies a mechanism for raising low cost finance which can have an immediate positive impact on both its financial and its trading position. EIIS financing offers companies a number of other positives, such as:

The relaxation of connected party rules aggregate investments up to €500,000 provides owner managers with significant opportunity to invest funds into their own company and avail of tax relief in respect of such investments. The funds must be used by the company for trading activities such as expansion, the creation of employment or maintaining employment. The EIIS should be of particular interest to pharmacists considering expanding their existing trades or purchasing new pharmacies. The following is a worked example of how the EIIS could benefit pharmacists considering expanding.

Given the lack of credit available to SMEs in Ireland over the last number of years, it is possible that the company may not be in a position to borrow. If it is possible for the company to borrow from a financial institution, it is likely that John and Mary and the company will have to provide significant security.

Investing all funds accumulated by Clued In Pharmacy Limited may result in cashflow concerns for the company in the short to medium term.

An alternative option would be for John and Mary to invest €150,000 each in Clued In Pharmacy Limited, which could be used by the company to purchase the pharmacy. The balance of the €1m purchase price could be funded by either borrowing from a financial institution or the use of funds accumulated by the company.

The net cost of purchasing the pharmacy in the above example would be: 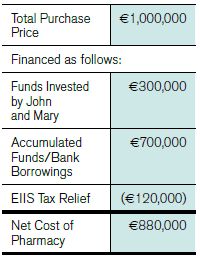 By availing of the EIIS, John and Mary are able to claim tax relief of €120,000 in respect of the use of their personal funds towards the purchase of the new pharmacy. At the end of the four-year holding period, it should be possible for the company to redeem John and Mary's shares issued in respect of the €300,000 investment and return their capital.

When the EIIS was introduced, it was estimated that the annual cost of the scheme to the Exchequer would be €38m (investments of €128m). Finance Act (No. 2) 2013 took steps to increase the attractiveness of the EIIS by excluding it from the high-earner restriction for a three-year period until 31 December 2016. The Department of Finance published a review of the EIIS in October 2014. This review reaffirmed the Government's commitment to the EIIS. The key point to note from these figures is that the EIIS is being underutilised.

The EIIS is perhaps the one tax relief remaining which offers individuals a mechanism for reducing their overall effective rate of Income Tax. Given that a significant number of pharmacists are owner managers, there is significant scope for pharmacists to receive EIIS tax relief up to the connected party limit of €500,000.