Mauritius: How Exporters From Developing Countries Will Be Treated Under The UK's New Trading Scheme

The United Kingdom recently announced its new Generalised System of Preferences (GSP)—the Developing Countries Trading Scheme (DCTS)—which will come into force in early 2023. The DCTS appears to be more liberal and generous compared to the schemes offered by the UK under the EU. Forty-six least developed countries (LDCs), as designated by the United Nations, and close to 20 other vulnerable developing countries and territories, classified as low- and lower-middle-income economies by the World Bank, will benefit from the UK scheme.

Like the existing EU GSP, the UK's DCTS comprises three different schemes. The DCTS Comprehensive Preferences—previously known as the LDC Framework—is the most generous of all and is reserved for LDCs. The DCTS Enhanced Preferences or the second-best preferential regime will benefit economically vulnerable low- and lower-middle-income countries.1 The third category of the preferential regime, the DCTS Standard Preferences, will initially benefit two countries: India and Indonesia.2

The UK's combined total imports from DCTS beneficiary countries stood at US$ 37 billion in 2021. These countries together comprise 5.4 per cent of the UK's global goods imports. The UK imports around £3.6 ($5 billion) billion from the DCTS Comprehensive Preferences countries (Figure 1),3 which is less than one per cent of its total imports. Two-thirds (£2.4 billion or $3.3 billion) of it is imported from Bangladesh alone, and around 16 per cent (£590 million or $800 million) from Cambodia. Exports of these two countries to the UK are dominated by apparel items. The UK's imports from the other 44 LDCs are £610 million ($850 million). Goods imports from the DCTS Enhanced Preferences and Standard Preferences countries in 2021 stood at £7.6 billion ($10.5 billion) and £15.7 billion ($21.5 billion), respectively. The United Kingdom imports pearls and precious metals (17%), knitwear garments (13%), minerals (11%), woven garments (9%), electric machinery (9%), and other items from DCTS beneficiary countries (Figure 2). On the other hand, the UK's export to these countries in 2021 were £11 billion ($15 billion), comprising 3.1 per cent of total exports. 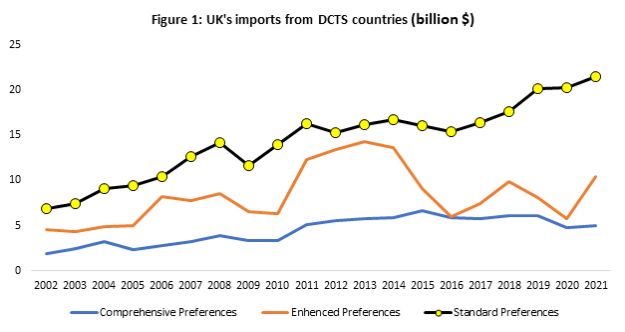 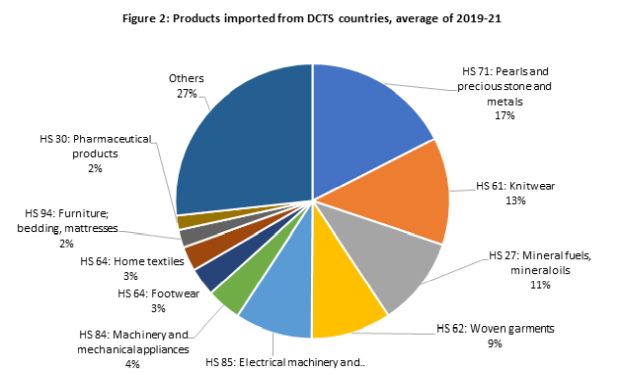 It is worth noting that, not all imports from the DCTS beneficiary countries will make use of preferences.

UK DCTS What is new?

Overall, the new UK system will be a much-improved trade preference mechanism in comparison with those currently offered by most other countries. The existing trade between the UK and DCTS beneficiary countries is small (£38 billion or $52 billion of which the UK exports to those countries just about £11 billion or $15 billion).

The removal of sustainability criteria makes eight more countries, which would otherwise be considered for Standard Preferences only, immediately eligible for the Enhanced Preferences scheme. These eight countries, viz., Algeria, Congo, Cook Islands, Micronesia, Nigeria, Niue, Syria, and Tajikistan, together, in 2021, exported £2 billion ($2.7 billion) worth of goods to the UK. Their inclusion in the Enhanced Preferences could help their exports to rise. The simplification of the requirements will help six more graduating LDCs, viz., Angola, Bangladesh, Bhutan, Lao People's Democratic Republic, Nepal, and São Tomé and Príncipe directly move to the Enhanced Preferences. These countries together exported £2.5-£3 billion ($3.5-4 billion) to the UK in recent years. Bangladesh will be the largest beneficiary of this move with more than 95 per cent of its export continuing to benefit from duty-free access after it graduates from the group of LDCs (in 2026) followed by an additional three-year transition period granted.

Although not explicitly mentioned, it is understood that the UK—like the EU—will continue to provide a three-year additional transition period for graduated LDCs during which time they will continue to access DCTS Comprehensive preferences. This will benefit the recently graduated (e.g., Vanuatu) and upcoming graduating countries including Bangladesh, Bhutan, Lao PDR, Nepal, etc.

Tariff cuts under the DCTS and EU GSP

The DCTS simplifies and liberalises tariffs imposed on the GSP beneficiary countries.

Nevertheless, most beneficiaries within the LDC group and vulnerable low- and middle-income categories make very limited use of preferences. Therefore, working with exporters from these countries develop their trade capacity should remain a key priority.

The DCTS offers simplified rules of origin for LDCs compared to those offered under the EU's Everything but Arms (EBA) initiative for the LDCs. Many LDCs find it difficult to utilise trade preferences due to lower value-added contents, limited participation in global value chains, and stringent product-specific rules, resulting in low utilisation rates. For example, the GSP utilisation rate of Kiribati was just 17 per cent in the EU, meaning that only 17 per cent of GSP eligible items could meet the rules of origin requirements to benefit from the preferential access. Under the DCTS, product-specific rules (PSRs) have been simplified for the LDC to avoid overly restrictive requirements. However, those PSRs will remain unchanged for other DCTS beneficiary schemes. The 'double-stage' transformation requirement for apparel imports from non-LDC DCTS beneficiary countries remains unchanged. This may impose some restrictions on non-LDC clothing exporters, especially for the graduating Asian LDCs such as Bangladesh, Cambodia, Lao PDR, and Nepal.

The UK allows extended cumulation for LDCs with DCTS and Economic Partnership Agreement (EPA) countries to benefit from duty-free access. This could theoretically help LDCs participate in regional and global supply chains and meet the rules of origin requirements. The cumulation rules for two Asian regional groups remain unchanged.5 As a result, even after their graduation, apparel exporters such as Bangladesh and Cambodia can take advantage of regional cumulation with several other South Asian countries.

In some cases, the UK has introduced product-specific graduation rules, and these will now apply to the DCTS Standard Preference countries only, from which India and Indonesia will be affected. Such items as textiles for India and animal and vegetable oils for Indonesia remain graduated. On the other hand, some products from the two countries will now be considered "competitive" and will thus be moved on to the general tariff rates. These include leather for India and musical instruments for Indonesia. Products regarded as "not as competitive for the UK market", such as India's metal exports, have been included under the Standard Preferences rate. According to the estimates provided by the DCTS, changes in product graduation would result in £748 million of Indian exports graduating off the preferential rate, compared to £791 million in GSP. For Indonesia, £62 million of exports graduate compared to £88 million in GSP.

2. Uzbekistan and Vietnam are also classified under the DCTS Standard Preferences. However, they have bilateral trade agreements with the UK.

4. It needs to be mentioned that after LDC graduation Bangladesh will face more stringent rules of origin in its apparel exports to the UK. Instead of currently single-stage transformation, Bangladesh will require fulfilling a double-stage production transformation (i.e., domestically produced fabrics rather than imported fabrics must be used in making apparel items) to retain duty-free market access. Bangladesh has the required backward linkage for meeting this RoO requirement in knit-apparels but not in woven products. Given that almost seven years' time left before Bangladesh's moving from DCTS Comprehensive to DCTS Enhanced preferences