(Deep Dive Into Environment & Pollutants – Lets Protect the Planet And People In It!!!)

Environmental Social and Governance (ESG) is of increasing importance for companies in the global supply chain. Post August's IPCC Report on global warming & climate change it's become more imperative to control greenhouse gases & pollutants in an aggressive manner. As part of corporate responsibility & sustainability initiatives, Indian companies would need to incorporate pro-active steps in monitoring & reducing various pollutants in their supply chain. Below is a synopsis of the pollutants and an analysis of them to help professionals design programs to deter further climatic catastrophes & irreversible changes. 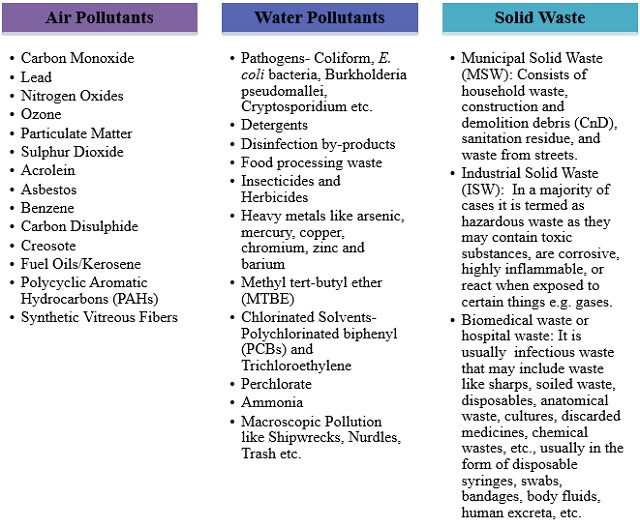 1.1Montreal Protocol: Montreal Protocol was created to decrease the production and use of ozone depleting chemicals in order to minimize their abundance in the atmosphere and therefore protect the earth's delicate ozone layer. The first Montreal Protocol was signed on September 16, 1987, and went into effect on January 1, 1989. It is a historic record that has effectively decreased worldwide ozone-depleting substance production, consumption, and emissions.

1.2United Nation's Convention to Combat Desertification: The United Nations Convention to Combat Desertification (UNCCD), which was established in 1994, is the first legally enforceable international agreement that connects environment and development with long-term land management. The Parties to the Convention conduct technical meetings throughout the year and organize the Conferences of the Parties (COPs), every two years, to promote the Convention's goals and objectives and make progress in its implementation.

1.6Aarhus Convention: The Convention was adopted on June 25, 1998 in Aarhus, Denmark and came into force on October 30, 2001. People have the right to obtain information, engage in decision-making, and pursue justice in environmental problems under the Convention. Its robust dual environmental and human rights safeguards can aid in the response to many of the world's concerns, ranging from climate change and biodiversity loss to air and water pollution, poverty alleviation, and security. It provides a robust foundation for governments to successfully involve the public in the implementation of the 2030 Agenda for Sustainable Development and its goals.

1.7International Plant Protection Convention (IPPC): IPPC is a 1951 multinational convention administered by the United Nations Food and Agriculture Organization with the goal of ensuring integrated, comprehensive measure to stop and regulate the introduction and spread of plant and plant product pests. The Convention covers the preservation of wild flora and plant products in addition to cultivated plants.

1.8United Nations Framework Convention on Climate Change: The United Nations Framework Convention on Climate Change (UNFCC) established on March 21, 1994, is an overarching framework for international cooperation to address the threat of climate change. It acknowledges that the climate system is a common resource whose equilibrium may be impacted by carbon dioxide and other greenhouse gas emissions from industry and other sources. The Convention's ultimate goal is to keep greenhouse gas levels stable at a level that prevents harmful anthropogenic (human-caused) influence with the global climate. According to the Convention, such a level should be reached in a reasonable amount of time to allow ecosystems to adjust naturally to climate change, to guarantee that food supply is not jeopardized, and to allow for long-term economic development.

1.9Convention on Biological Diversity: On the 5th of June 1992, during the United Nations Conference on Environment and Development, the Convention was opened for signing the Rio "Earth Summit". It remained accessible for signatures until 4 June 1993, when 168 signatures were obtained. The Convention went into effect 90 days following the 30th ratification, on December 29, 1993. The major expectation from the Convention is as follows: preservation of biodiversity; the sustainable utilization of its components; and the fair and balanced distribution of benefits from biological resources. 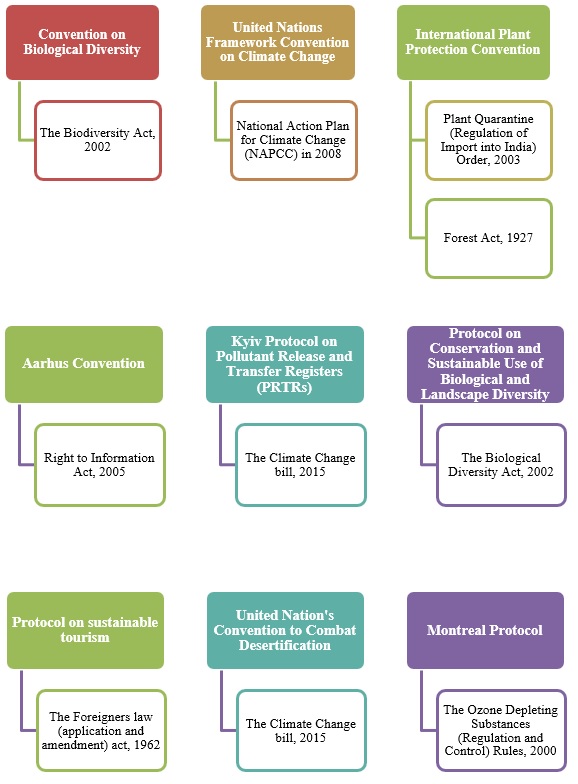 Hazardous and Other Waste (Management and Transboundary Movement) Rules 2016

Air pollution is caused by emission of chemicals, particulates, biological materials or other harmful substances. Emissions which cause air pollution may be released both by natural processes as well as by human activity. An air pollutant is a substance or material in the air that interferes with overall health and comfort of people and the stability of the food chain. Air pollutants can be classified as Primary and Secondary pollutants.

The Ministry of Environment and Forest (MoEF), Govt of India, vide gazette notification, G.S.R826 (E), dated 16.11.2009 have notified the National Ambient Air Quality Standards by amending the Environment (Protection) Rules 1986. The MoEF has prescribed different air quality standards for i) industrial areas, residential, rural and other areas, and ii) ecologically sensitive areas (as notified by the Central Govt.).

4.1.2Ecologically-sensitive areas à Annually, the air in these areas should not have more than 0 µg/m3 SO2 and 30.0 µg/m3 NO2. The parameters for other pollutants are the same as that of industrial, residential and rural areas.

Solid waste is a broad term for municipal/ domestic waste, industrial waste and hazardous wastes. The common causes for solid waste are overpopulation, urbanization, affluence which leads to overconsumption, and technology. Solid waste pollutes the air, water and soil, and can cause health hazards such as food and water contamination which leads to various diseases, water logging and mosquito breeding. Solid waste also impacts the environment by contaminating groundwater, aesthetic damage caused by littering, noxious fumes, etc.

Water pollution is the release of chemicals, microorganisms, radioactivity or heat into water bodies. Water pollution affects the quality and usability of water and inhibits the natural functioning of ecosystems. Domestic sewage is a primary source of pathogens and harmful microorganisms. If sewage is untreated, the oxygen content of water may be depleted. Lack of oxygen in water bodies may endanger fish and aquatic organisms, which need high levels of oxygen to survive. Moreover, nitrates and phosphates in sewage lead to rapid growth of algae, also known as eutrophication. Eutrophication also reduces the oxygen dissolved in water, thereby killing aquatic organisms in the water.

Thermal pollution is essentially the discharge of heat into the air or water. Heat pollutes water by decreasing the solubility of oxygen in the water. Decreased oxygen levels in the water endangers valuable species of game fish. If such species of fish go extinct, it significantly alters the food web. The chief causes of thermal pollution are discharging of cooling water from power plants, industrial activities, release of cold water, chemical pollutants, waste from livestock dumped in the water, deforestation, soil erosion, geo-thermal activities, and unawareness among people.

Petroleum pollution includes oil from roadside parking lots and also accidental oil spills. One of the chemicals related to petroleum oil which causes pollution is polycyclic aromatic hydrocarbons (PAHs), which have multiple carbon rings and can also be quite persistent in the environment.

Water having different uses have different recommended pH levels. Drinking water and bathing water should ideally have a pH of 6.5-8.5. Water for wild life propagation and fisheries requires a similar pH level. Water for irrigation, industrial cooling and waste disposal may have pH levels of 6-8.5.

Lower pH levels in water are majorly caused by CO2 emitted by photosynthesis, respiration and decomposition. Carbon dioxide though present in water in a dissolvable state, it can react with water to form carbonic acid (H2CO3), also known as acid rain. pH of water can also fluctuate due to natural influencers (carbon and limestone) and man-made influencers (mining, smelting, fossil fuel combustion, etc.).

Sediments are those materials (both organic and inorganic) that can be carried away by wind, water or ice, which mostly come from erosion and weathering, while organic sediment is typically detritus and decomposing material such as algae. Sediment can be as small as sand particles to large rocks. It can be either suspended, i.e. floating in the water or bedded, i.e. settled at the bottom of the water. Suspended sediment can be further classified into suspended sediment and suspended solids.

Sediment transport is important since it builds aquatic habitats for spawning and benthic organisms. It also supplies nutrients and vegetation to ecosystems such as floodplains and marshes. It also restores coasts. Too little sediment inhibits habitat formation, deprivation of nutrient enrichments, death of ecosystems, physical changes to the terrain, coastline erosion, etc.

Sediment may be contaminated by metals and persistent bio-accumulative toxics. Contaminated sediment is also harmful to aquatic, human and environmental health.

India has prescribed the following parameters for determining quality of water depending on the purpose for which the water is being used.

The full list can be found from the Food Safety and Standards (Contaminants, Toxins and Residues) Regulations 2011 –

https://www.fssai.gov.in/upload/uploadfiles/files/Compendium_Contaminants_Regulations_20_08_2020.pdf - It gives the maximum acceptable quantity of these chemicals in food items, exceeding which the chemicals would be hazardous.

This article is for information purpose only. It is not intended to constitute, and should not be taken as legal advice, or a communication intended to solicit or establish commercial motives with any. The firm shall not have any obligations or liabilities towards any acts or omission of any reader(s) consequent to any information contained herein. The readers are advised to consult competent professionals in their own judgment before acting on the basis of any information provided hereby.