India: Chronicles Of Tata-Mistry: Is Reinstatement Of Cyrus Mistry By NCLAT A Pyrrhic Victory?

by Gaurav Singh Gaur
King, Stubb & Kasiva
Your LinkedIn Connections
with the authors

In its critically acclaimed judgment dated December 18, 2019 in Cyrus Investments Pvt. Ltd. v. Tata Sons Ltd. & Ors.1, the two-member bench, comprising of Justice S.J. Mukhopadhaya and Justice Bansi Lal Bhat of the National Company Law Appellate Tribunal ('NCLAT'), ruled that the removal of Mr. Cyrus Pallonji Mistry as Chairman of Tata Sons Limited ('the Company') was illegal. While reinstating him to the position of 'Executive Chairman' of the Company and consequently as Director of the Tata Group of Companies for the remainder of his tenure, the Hon'ble Tribunal had further declared that the decision of the Registrar of Companies ('ROC') changing the Company from 'Public Company' to 'Private Company' was illegal and the same was set aside.

For over 5 decades, on the basis of mutual trust and confidence, Shapoorji Pallonji Group ('SP Group') has been jointly managing the affairs of Tata Sons Limited (Respondent No.1) which is a group company comprising of 'Tata Trusts', 'Tata Family' and 'Tata Group Cos.'. The Tata Trusts and Tata Group Companies along with Tata family members collectively hold over 81 % of total shareholding while the SP Group holds over 18% of the equity share capital of Tata Sons Limited. Mr. Cyrus Pallonji Mistry (Respondent No.11) was selected after subjecting him to a professional selection process as 'Executive Chairman on merits'. Thereafter, the respondents shockingly removed Mr. Mistry justifying his removal by inter alia linking it to his alleged lack of performance without recording any justifiable reasons for sudden removal. 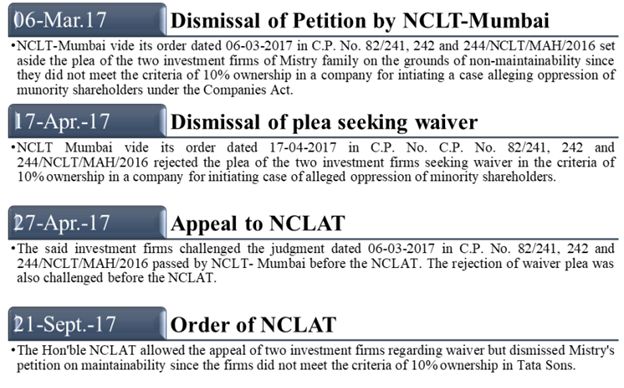 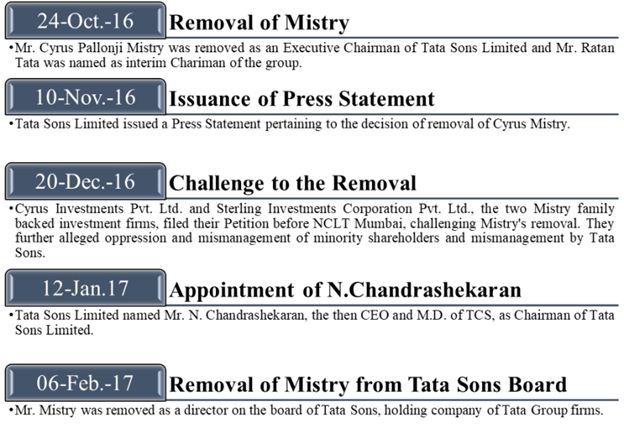 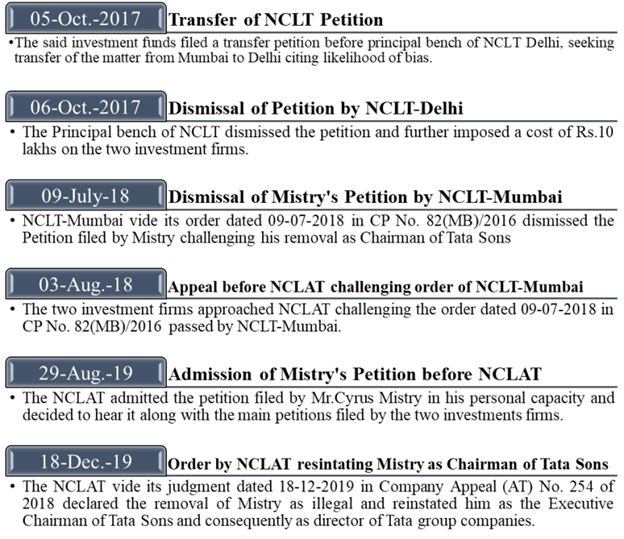 Interference in decision making process: The Cyrus Investments Pvt. Ltd. (Appellants) challenged the unreasonable interference in the process of decision-making by 'Tata Sons' and Tata Group Companies. According to the Appellants, such interference fostered a pattern of the decision- making that led to undermining the authority of the Board of Tata Sons. Thus, the Board of Directors ( 'BOD') failed to exercise independent judgment and discharge their fiduciary duties.

Removal of SP Group and 11th Respondent: It was further alleged that no committee was formed for the removal of the incumbent Chairman as required under Article 118 of the Articles of Association (AoA) nor any legal opinion was taken by the BOD to determine whether said removal, in such a hasty manner, was in accordance with the AoA.

Conversion of Tata Sons from Public Limited Company to Private Limited Company: It was further alleged that when these proceedings were sub-judice, an attempt was made for conversion of the said public company to a private company, with a view to dilute the standards of governance for self-serving interests thereby giving legitimate apprehension of expropriation of the Appellant's shareholding by abuse of the Article 75 of AoA.

Potential abuse of Articles 121 & 121 A: It was also alleged that the Article 121 & Article 121 A introduced in the year 2000 and 2014 respectively in the AoA of the Company provides a veto on every decision to be taken by BOD of Tata Sons Limited to trustee nominee directors which is opposed to conventional affirmative rights provisions being available to the minority only on selected matters.

Failure of Respondent No.11 to fulfil his duties: It was further alleged by the Respondents that the proposal to seek a change of guard at 'Tata Sons Limited' was initiated by the majority shareholders and the said proposal was not on account of any personal ill will or animosity against Mr. Mistry. Furthermore, it was alleged that there were lapses of governance observed during his tenure and that he was unable to lead the Tata Group in a cohesive manner and failed in providing proper guidance and support to the Group.

OBSERVATIONS AND JUDGMENT OF NCLAT

It was further observed by NCLAT that three directors had been inducted into the Board of Tata Sons only on 08-08-2016 after the appraisal report of the 'Nomination and Remuneration Committee'; who had attended just one Board meeting prior to the meeting dated 24-10-2016. Furthermore, it was also observed that two of the Directors, and a Trust Nominee Director, who voted for the removal of Mr.Mistry were members of the 'Nomination and Remuneration Committee' which just 4 months prior to his removal had praised the performance of Mr.Mistry as Executive Chairman.

The NCLAT had further observed that admittedly a prior meeting was held on 24-10-2016 between 2:00 pm to 3:00 pm., wherein Tata Trusts in a separate meeting decided to remove Mr.Mistry wherein Mr.Ratan N. Tata in presence of Mr.Nitin Nohria called Mr.Mistry and had asked him to resign.

The Articles 121A r/w Article 121 provides for the affirmative vote of the nominated Directors by Tata trusts which according to the NCLAT has an overriding effect and renders the majority decision subservient to it.

With regard to the Conversion of Respondent No.1 from Public Company to a Private Company, it was observed by the NCLAT that the Company was required to follow the mandate of Section 14(1)(b) r/w Section 14(2) (3) of the Companies Act, 2013. It is only after the order of approval by the Tribunal, the Company can request the Registrar together with a printed copy of the altered articles, to register the Company as 'Private Company' or 'Public Company' as the case may be.

NCLAT held that the Appellants have made out a clear case of 'prejudicial' and 'oppressive' action by contending Respondents, including Mr.Ratan Tata (2nd Respondent), Mr.Nitin Nohria (7th Respondent) and Mr.N.A. Soonawala (14th Respondent) and other nominee Directors.

Consequently, in the light of aforesaid observations, the earlier judgment dated 09-07-2018 passed by NCLT-Mumbai was set aside and the following orders were categorically passed by NCLAT:

In addition to the same, certain remarks made in the judgment dated 09-07-2018 against the Appellants, Mr.Mistry and others were also expunged by the NCLAT since the same was found to be undesirable and based on extraneously sourced material not on record.

After the judgment dated 18-12-2019 passed by the NCLAT, the Registrar of Companies (ROC) filed application under Section 420(2) and 424(1) of the Companies Act, 2013, r/w Rule 11 of the NCLAT Rules, 2016 and sought for impleadment of the Applicant and further seeking amendment in paragraphs no. 166-187 of the judgment dated 18-12-2019 wherein the remarks were made by the NCLAT in the context of its conclusion that the conversion of Tata Sons Limited by ROC from a Public Company to a Private Company was "illegal". It was further urged that no opportunity of hearing was afforded to the ROC violating principles of natural justice.

APPEAL BEFORE THE HON'BLE SUPREME COURT OF INDIA

Being highly aggrieved by the judgment, the Company filed an appeal before the Hon'ble Supreme Court on January 2, 2020 challenging the impugned judgment in its entirety. Mr. Ratan Tata, on January 3, 2020, had also filed a separate appeal before the Apex Court claiming that the NCLAT's order holding him guilty of oppressive and prejudicial actions against the minority shareholders' interest, is without any factual or legal foundation whatsoever.

Adding another twist to the long standing boardroom battle between the parties involved, the Supreme Court bench of Hon'ble Chief Justice of India SA Bobde, Justices B.R. Gavai and Surya Kant on January 1, 2020 stayed the operation of the impugned judgment of the NCLAT dated December 18, 2019 and further issued notice to the parties involved.

REJECTION OF THE PLEA OF ROC

The Hon'ble NCLAT on 06-01-2020 dismissed the plea preferred by the ROC seeking removal of certain observations in its judgment dated 18-12-2019. A Division Bench headed by Justice S.J. Mukhopadhaya observed that the said judgment cast no aspersions on the ROC.

The judgment of the NCLAT has contributed to mayhem and turmoil of uncertainty among businesses and the legal environment in India. The Hon'ble NCLAT erred in importing relief that was never really prayed for in the appeal. Restoration of Mr. Mistry for his remaining term that had already ended in March 2017 might result in catastrophic implications on the governance and corporate structure of Tata Sons Limited.

The NCLAT in the light of its findings has further erred to observe and held that Tata Sons continued to be a Public Company even after the change of the legal status and ROC Mumbai recording the change. The said observation of the NCLAT was primarily based on a factually wrong-finding that the Appellants have invested around 1 lakhs crore. It is pertinent to note that the said shareholding has been acquired by the Appellants through various bonus and rights issues which was not taken into consideration by the NCLAT.

Furthermore, the instant judgment of NCLAT has resulted in setting up of a dangerous legal precedent by ordering the nominee shareholders of the company from desisting to take any decision in advance, which requires a majority decision or in AGM, directly interferes with the rights of the shareholders and consequently debilitates the principles of Corporate Democracy.

Businesses and the entire legal industry are therefore now eagerly awaiting the judgment of the Hon'ble Supreme Court to settle this endless dispute between the two groups and to provide a clear interpretation of the laws and issues involved in respect of the instant appeals.