by Ikigai Law (New Delhi)
Ikigai Law
Your LinkedIn Connections
with the authors
To print this article, all you need is to be registered or login on Mondaq.com.

This article traces how courts across India have interpreted some crucial concepts pertaining to Safe Harbour law in India.

It is Part II in our series of articles which trace the evolution of Safe Harbour law in India. You can read Part I of this series here.

The Safe Harbour rules have evolved considerably since their enactment, partly through amendments of the underlying act and rules, and partly through the way in which these provisions are interpreted by the Court.

The current provisions in relation to Safe Harbour protection for intermediaries are summarised in the diagram below. We will be analysing the highlighted section which deal with the concepts of (i) passivity; (ii) aiding or abetting the commission of an unlawful act and (iii) actual knowledge. 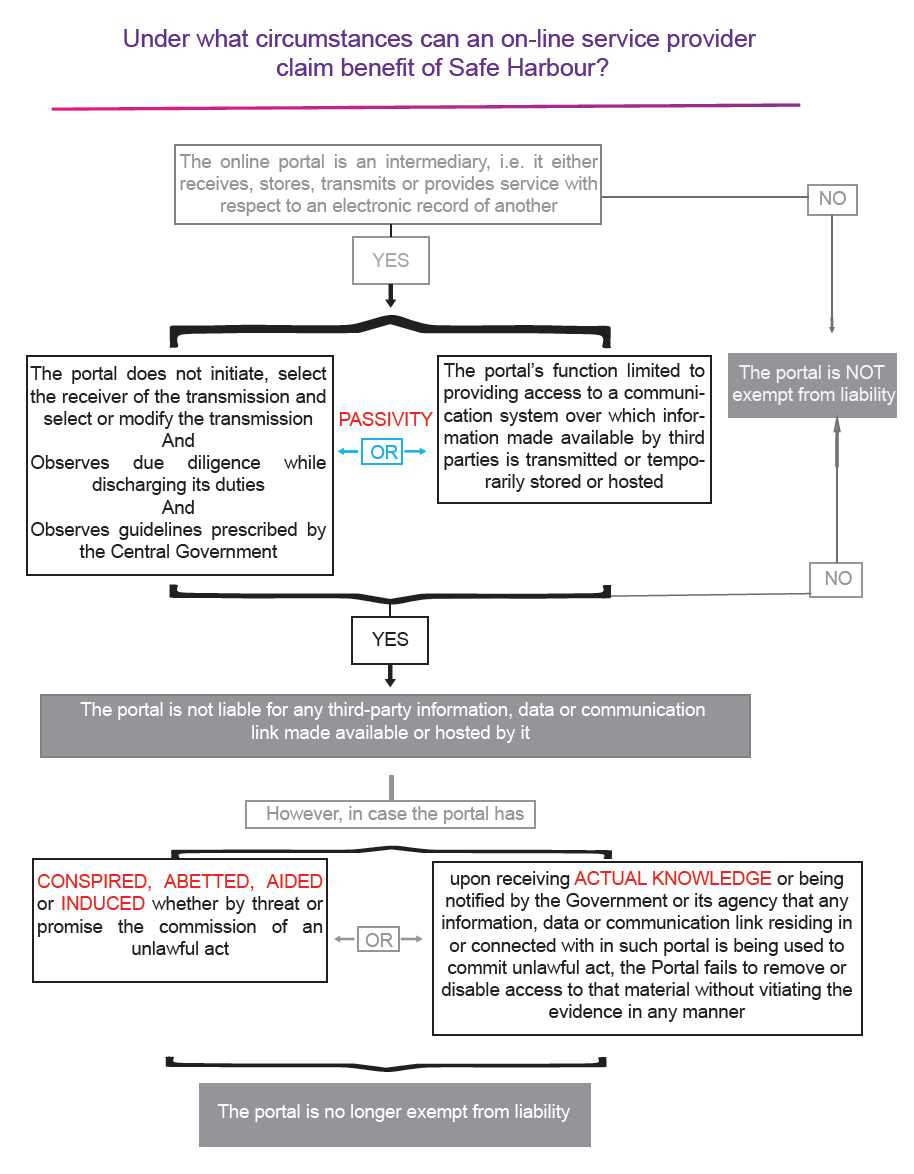 The Safe Harbour protection under Indian law extends only to "passive" intermediaries, i.e. intermediaries which "act as mere conduits or passive transmitters of the records or information[2]". Thus, unless an intermediary confines itself to a technical role wherein it provides automated or technical processing of data provided by its user, it will lose its immunity. To claim this immunity an intermediary is not expected to do anything which gives it knowledge of or control over user generated data.

In the matter Christian Louboutin SAS vs Nakul Bajaj and Ors[3], the Delhi High Court provided some insight on what it means to be a passive transmitter of information. It made an exhaustive list of various functions that may be performed by an intermediary and held the more functions an intermediary performs the more likely it is to be termed as an active participant. The list populated by the Delhi High Court is as under- 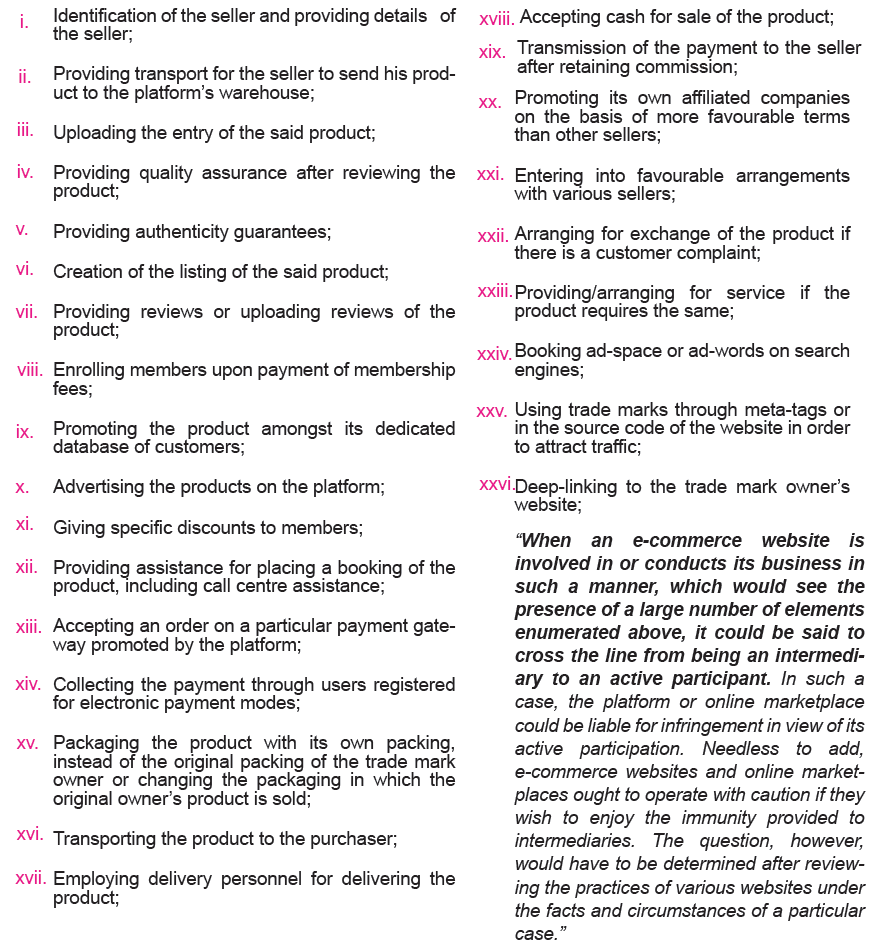 (ii) Aiding or Abetting the commission of an unlawful act

Where an intermediary is charged with conspiring, aiding, abetting or inducing an unlawful act, the provisions of the law the violation of which the intermediary has been charged with have to be seen. For instance, if the products listed by a vendor on an e-commerce website are charged as being counterfeit and thus infringing on the trademark of the original manufacturer the provisions of the Trademarks Act, 1999 will be referred to. Section 101 and 102 of the said Act state the meaning of applying trademark and trade description and falsely applying trademarks respectively. Basis these provisions of the Trademark Act, the Delhi High Court was of the opinion that any-

would be deemed to have aided in the infringement or falsification of the mark[7].

Rule 3 (2) of the Intermediary Guidelines stipulates that intermediaries are required to inform their users not to host, display, upload, modify etc. information of the nature mentioned under that rule. Rule 3(4) is the takedown provision which states that any information which is in contravention of Rule 3 (2) must be disabled by an intermediary within thirty-six hours of "obtaining knowledge by itself or [receiving] actual knowledge by an affected person in writing ....". The effect of this provision was that any person aggrieved by any content displayed on the intermediary platform could simply send a written request to the intermediary to take down such content as it was unlawful. The intermediary would then within the next 36 hours have to apply its own judgment to determine whether the content was unlawful or not. Consequently in instances where the intermediary felt that there was the slightest possibility that the content might be deemed to be unlawful it would be compelled to take down the content within 36 hours of receiving the written communication or risk losing the safe harbour protection.[8] Hence, intermediaries started to readily removed content pursuant to civilian requests to avoid risking loss of safe-harbour protections[9].

This problem was remedied by the Supreme Court in 2015, through the Shreya Singhal Case. The Supreme Court held that an intermediary was bound to take down and unlawful content on its platform only upon receiving "actual knowledge from a court order or on being notified by the appropriate government or its agency that unlawful acts relatable to Article 19(2) are going to be committed"[10]. Similarly, "actual knowledge" as used in Rule 3(4) was read down to mean knowledge through the means of a court order. Thus, an intermediary would no longer lose safe harbour protection if it refused to take down content on its platform pursuant to a written intimation by any party that the concerned content was unlawful. It was only bound to take down content pursuant to an order of a court or upon being notified by the appropriate government or its concerned agency.

Meanwhile, Super Cassettes Industries Ltd. sued MySpace Inc. for alleged copyright infringement of its content on the latter's platform. This was also known as the MySpace Case. A 2011 interim order[11] passed by a single bench of the Delhi High Court held MySpace liable for copyright infringement despite MySpace showing that it had no knowledge of the infringement on its platform, that it removed infringing material upon receiving complaints and that Super Cassettes had refused to submit songs to MySpace's song ID database. The interim order also directed MySpace to pre-screen all user-uploaded content.

This interim order was subsequently overruled by a division bench of the Delhi High Court[12], which observed that MySpace could only be said to have general awareness and not actual knowledge of the infringement[13]. Further, the Court observed that in the case of copyright laws it is sufficient that MySpace receives specific knowledge of the infringing works in the format provided for in its website from the content owner without the necessity of a Court order"[14]. Thus, the Delhi High Court carved out an exception to the ruling of the Supreme Court in the Shreya Singhal case, wherein the Supreme Court had held that a platform is deemed to have actual knowledge about the illegality of any content hosted on such platform only when such information is communicated to the Platform by way of a court order.

Global Takedowns- In its recent judgment[15], the Delhi High Court has held that the requirement imposed on intermediaries to take down any content under section 79 of the IT Act implies that the intermediaries have to remove such content from their entire computer network, wherever it may be located across the world, and not merely in India. Thus, all material which is deemed to be unlawful content as per Indian Law, is required to be taken down by the concerned intermediary platform globally (if it has the technical capability to do so) and not just in India. Our in-depth analysis of this order is available here.

Based on the above discussion there are certain mitigative measures which an intermediary can deploy to avoid losing safe harbour cover. These include-

We understand that it would be difficult for intermediaries to put in place several of these measures. They will affect the quality of service they offer to their vendors and their branding practices. However, unless the law relating to Safe Harbour is amended to give more space to intermediaries to perform their support and logistical activities their ability to perform these activities will continue to be severely restricted.

Intermediaries serve a useful purpose in the society and the economy by creating new marketplaces and avenues for people to transact. It has been seen that strong Safe Harbour protection laws allow intermediaries to focus on improving and expanding scope of services without worrying about legal action[16]. On the contrary, laws that do not provide adequate cover to intermediaries discourage service providers from offering a service[17]. The need of the hour is to provide greater support and flexibility to intermediaries to carry out their functions. This is not being achieved either by the current law or the draft amendments.

[9] Nikhil Pahwa, #NAMApolicy on Safe Harbor: Should different sizes or categories of intermediaries be regulated differently? (05 February 2019), available at

ARTICLE TAGS
India Transport Marine/ Shipping
POPULAR ARTICLES ON: Transport from India
Sauce For The Goose Is Sauce For The Gander – Determining Priority Of Costs And Interests On Wages
Renata Partners
The ruling came to be passed by the High Court in an application filed by erstwhile crew members of the vessel OSV Beas Dolphin for payment out of their claim towards crew wages...
Ship Arrests And Indian Maritime Law
STA Law Firm
India has a long-standing history in dealing with the sea and has had a distinguished tradition for several years with trade and commerce, both within the region and beyond its territorial borders.
Maritime Lien In India
JSA
The existence of a maritime lien rests on the principle that the vessel is a legal entity itself, apart from its ownership.
Civil Aviation Regulatory Framework In India
Kochhar & Co.
Currently, India is one of the fastest growing markets for civil aviation despite the stress faced by the aviation sector due to the COVID-19 pandemic.
Frequently Asked Questions On Arrest Of Ship In India - Ship Arrest In India
Brus Chambers Advocates & Solicitors
Is India a signatory to any of the International Conventions on ship arrest? If so, which one?
Electric Vehicles: Driving India Towards Sustainability
IndusLaw
India is a country that heavily relies upon various forms of polluting hydrocarbons for energy to run its industries, power plants and vehicles.
FREE News Alerts
Sign Up for our free News Alerts - All the latest articles on your chosen topics condensed into a free bi-weekly email.
Register For News Alerts
Article Tags
India Transport Marine/ Shipping
Similar Articles
Powered by mondaq AI
MATCH
51%
Amendment To Guidelines For Intermediaries NovoJuris Legal
78%
Intermediary Liability: Evolution Of Safe-Harbour Law In India (Part I) Ikigai Law
75%
The Conundrum Of Intermediary Liability In The Last Decade Khaitan & Co LLP
72%
Liable vs. Accountable: How Criminal Use Of Online Platforms And Social Media Poses Challenges To Intermediary Protection In India BTG Legal
71%
Safe Harbour For Intermediaires Litmus Legal
Related Articles
Sauce For The Goose Is Sauce For The Gander – Determining Priority Of Costs And Interests On Wages Renata Partners
Second Hand Car Dealers Deemed Owners Of Vehicles S.S. Rana & Co. Advocates
Aviation Regulation Comparative Guide Sarin & Co
Aviation Finance Comparative Guide Sarin & Co
Civil Aviation Regulatory Framework In India Kochhar & Co.
Mondaq Webinars
Malta as an e-Money and Payment Services Centre
GVZH Advocates
Considering the Nigerian Start-Up Act & The Opportunities for Tech
Oake Legal
More Webinars
Comparative Guides
Alternative Investment Funds
Artificial Intelligence
Aviation Finance
Aviation Regulation
Blockchain
More Guides
Mondaq Advice Centres
India
Trademarks
India
Arbitration, Litigation and Conciliation
India
Insolvency
Global
Trademarks in SAARC Countries
More MACs
Upcoming Events
Mondaq Social Media