India: The Ongoing Tussle Over Online Gaming In India

The last decade has seen great leaps in mobile usage and Internet penetration in India. A consequence of the ubiquity of mobile devices and the Internet has been the wide adoption of online games. Being still mostly unregulated, the online gaming space has seen proliferation of games of chance as well as skill based games. More importantly, 'real money gaming' has exploded. The isolation imposed by COVID-19 has resulted in a significant increase in the number of casual online gamers in India.

Gambling in India is viewed with a negative connotation, even today, and real money gambling is an emotive issue. This presents a unique regulatory challenge – how to limit the 'ill effects' of online gambling, without limiting games of skill and other legal businesses.

Interestingly, certain Indian State legislatures have been at the forefront of regulation, seeking to limit what can and cannot be offered in online gaming. But Indian States have often overreached in their regulatory zeal, leading to push-back from State High Courts. This State Legislature vs. State Court tussle is gathering steam, and shows no sign of slowing down.

The primary central law regulating gambling is a 150-year-old law (Public Gambling Act, 1867). Although this law does not define gambling, it differentiates between 'games of skill' and 'games of chance'; excluding the playing and offering of games of mere skill from the prohibition on gambling. Most state-enacted laws also exempt games of skill from the purview of gambling. In consonance with this, Indian Courts have generally upheld this distinction, by ruling that games of skill l' i.e., is one where success depends principally on the superior knowledge, training, attention, experience and adroitness of a player do not fall into the category of gambling. On the other hand, since results of a 'game of chance' are arbitrary and dependent on elements beyond the control of the player, it constitutes gambling.

Indian Courts apply the 'dominant element' test to determine the legality of a game– i.e., where the element of skill predominates over the element of chance, such a game shall be a 'game of skill'. Competitions involving substantial skill do not constitute gambling activities. Courts have also clarified that no game can solely be skill based, and will inadvertently involve an element of chance.

Wary of the effects of online gaming, certain Indian states (particularly Karnataka, Tamil Nadu, Kerala, Andhra Pradesh, Telangana, and Rajasthan) have sought to implement the prohibition of all forms of online gaming, irrespective of the nature of the game (skill or chance). 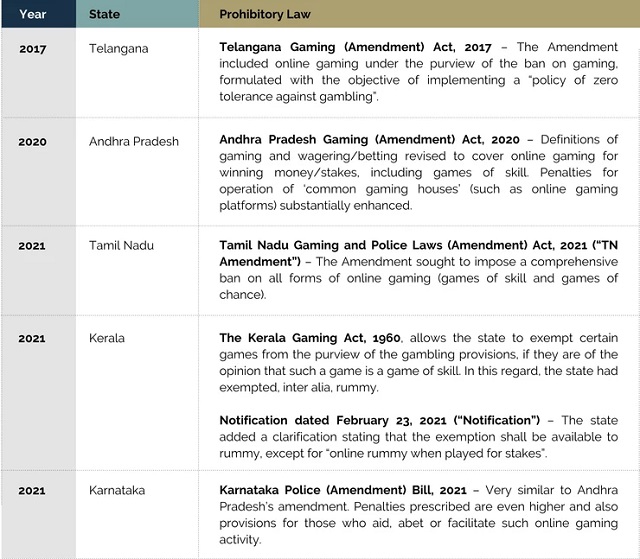 Following these regulatory changes, gaming stakeholders approached the respective State's High Courts for relief. In the recent past, the Tamil Nadu High Court ("TN HC") and Kerala High Court ("Kerala HC") have rolled back some of these prohibitions.

On August 3, 2021, the TN HC struck down the TN Amendment's ban imposed on online gaming.

In the same vein, on September 27, 2021 the Kerala High Court ("Kerala HC") in Gamekraft Technologies Private Limited & Ors v. State of Kerala & Ors, set aside the Notification issued by the state government withdrawing the game of skill recognition accorded to 'Rummy' (a card game recognised to be a game of skill by the Supreme Court of India in 1968).

This judicial trend is in keeping with judicial rulings in the past. Indian Courts have consistently upheld the game of skill v/s game of chance distinction. Since the 1960s, Indian courts have examined features of games to ascertain the dominant element and it is a fact that a game of skill recognition essentially green lights development of similar games.

In particular, online fantasy sports platforms have flourished courtesy of recognition of "Dream 11" as a game of skill by various high courts. There are still areas that lack clarity, however - Poker's legality has been a point of contention since 2012.

The TN HC and Kerala HC rulings indicates that Indian courts may continue to protect games of skill, but these rulings have not deterred further regulation.

The state of Karnataka very recently amended its police act to outlaw "any act on risking money or otherwise on the unknown result of an event including on a game of skill, including games of skill". It remains be seen whether this Amendment will be challenged in the State High Court.