The advent of the industrial revolution had triggered the social impact of accidents in manufacturing plants. With the evolution of sophisticated manufacturing product lines and implementation of heavy machinery, chemicals, and robotic engineering – the risk for humans deployed is high. India has strived to keep the workplace safety component intact and established the Public Liability Insurance Act in 1991.

The Public Liability Insurance Act, 1991 (the Act) was brought into effect to provide immediate relief and support to those affected by any accident while working/ dealing with hazardous substances at the workplace.  More often than not, certain business operations dealing with activities involving hazardous materials can lead to unexpected and adverse impacts. The employees working at such a facility and its surroundings, including people living in the vicinity, the environment at large are severely affected and also causes property damage. Keeping in mind social, environmental and financial aspects, the government deemed it essential to put in place a mechanism that ensured accountability for any incidental damages while carrying out such business operations.

The Act applies to all owners or any person controlling the handling of hazardous substances. The owner is deemed to undertake one or more insurance policies providing insurance contracts, which insures him against the liability of providing relief claimed by the person, who may have suffered loss or damage due to any activity of handling the hazardous substances. Section 3 of the Act provides for the principle of 'no-fault liability' on the owners, which makes it certain that the owner shall provide adequate relief to the worker in case of death or injury or damage of property caused as a result of an accident at the workplace. This Section permits the claimant to seek compensation without having to plead that the damage or injury was caused due to the owner's negligence.

Additionally, the Act empowers the Central Government to constitute an Environmental Relief Fund to provide immediate relief by utilizing the funds to facilitate rehabilitation, medical and other facilities for the survivors. In 2008, the Central Government notified the Environmental Relief Fund Scheme (ERFS), under which the United India Insurance Company Limited (UIICL) was appointed as the Fund Manager. UIICL handled the collection and disbursement of the insurance premium and any amount of damages or relief awarded by the National Green Tribunal (NGT) under Section 24 of the NGT Act, 2010. However, in November 2020, the Ministry of Environment and Forests and UIICL was slammed by the NGT for non-utilization of over Rs. 800 crore deposited with the fund manager until March 2020 sans information about its appropriate utilization. It was further observed that despite having a dedicated legal statute in place to provide immediate relief to the victims of accidents and also having a significant amount deposited in the appropriate fund, the amount remained unutilized, thus refraining the victims from availing the reliefs for which the Act was brought into force. The Tribunal reiterated the provisions of 'consent conditions' under the Water (Prevention and Control of Pollution) Act, 1974, the Air (Prevention and Control of Pollution) Act, 1981 and the Environment (Protection) Act, 1986 and the Rules. It urged the State pollution control boards to grant such 'consent conditions' only upon successful implementation of securing an insurance policy under the Act.

Bhopal Gas Tragedy is a catastrophic incident that tarnished the people's entire existence and their surroundings in the city of Bhopal and cited as one of the world's biggest industrial catastrophes, formed the basis for constituting the Act.  The tragedy dates back to 1984, where over 30 tons of methyl isocyanate gas was released from the Union Carbide pesticide plant, which as per investigations was a result of an inadequate governance structure of the plant. The death toll is estimated to be between 15 to 20 thousand; with more than half a million survivors and their subsequent generations suffering from respiratory issues, eye irritation or blindness and other maladies due to exposure to the toxic gas. Thirty six years since the catastrophe, the adverse impact of the gas leak continues to affect the lives of the survivors, who are still awaiting justice, seeking exemplary punishment to those responsible, adequate compensation to the victims, proper rehabilitation and medical facilities for survivors and eradication of toxic chemicals.

Duties of an owner under the Act;

Authority and Time Limit for Seeking Relief under the Act

Any application for claim or relief under the Act must be made to the Collector, within whose jurisdiction the accident occurred. The Collector under such circumstances has the powers of Civil Court for seeking evidence on oath, attendance of a witness and so on. The application for claim or relief sought must be made within 5 years from the occurrence of the accident.

Upon accepting the application, the Collector conducts a detailed inquiry into the matter and the claim sought. Thereafter, basis the inquiry, the Collector passes an award stating the final compensation amount to be paid by the insurer. Such award is required to be delivered to both the parties within 15 days from the date of delivery of the award and stands binding on all the parties thereto.

The insurer is required to make the payment within 30 days from the date of announcement of the award, in a manner as prescribed by the Collector. Where the owner is liable to pay relief, resorts to disposal of the property to evade payment of such relief; in such cases, the Collector may restrain the act by granting a temporary injunction on such disposal under Order XXXIX of the Code of Civil Procedure, 1908.

Any form of non-compliance with the provisions of this Act shall attract both imprisonment and a fine. In case of repeated offenders, the imprisonment shall not be less than 2 years extending up-to 7 years and a fine of not less than one lakh rupees.

Climatic condtions and sustainable development have gained significant popularity over the past decade. An increasing number of countries lay down ambitious goals and policies to fulfill their commitment towards a greener economy. Here is where the role of Sustainable Development Goals (SDGs) steps in. Established in 2015, members of the United Nations collectively adopted 17 goals to successfully achieve the same by 2030. The SDGs serve as a global framework for countries across the globe, providing fundamental issues to be focused on to attain environmental, social and economic growth & development.

When talking about the Public Liability Insurance Act, 1991, a direct reflection on the SDGs can be made, whereby, out of the 17 goals, the Act may either directly or indirectly have an impact on the following 5 goals –

With the growing momentum around the Environmental, Social and Governance (ESG) framework, governments and businesses are striving to ensure operations in alignment with the SDGs. Similarly, the provisions of the Act can be said to be in alignment with the global goals, as the primary objective of the Act is to provide immediate relief in case of an accident, which directly signifies promoting good health and well-being for those handling any hazardous substances. With respect to goals 5 and 10, the Act does not discriminate as to who is the person seeking relief. It is widely applicable to any aggrieved party (other than a workman), where death or injury or damage to property was caused due to an accident. While referring to goals 8 and 12, the same is reflected from provisions of the Act, which make it mandatory for owners or any person having control over handling hazardous substances, over ensuring one or more insurance policies are in place against relief from accidents.

Another notable trend in the global market is impact investment, which signifies mobilization of capital into investments focused on achieving measurable economic, social and environmental benefits and returns. In order to streamline the huge demand of such investments, the International Finance Corporation (IFC) in consultation with a core panel of external shareholders provides for the Operating Principles for Impact Management. This is a dedicated framework of 9 principles established for the investors to design, implement and integrate robust management systems throughout the investment cycle. The principles prescribed by the IFC along with the SDGs serve as a global framework, the fundamentals of which when analysed in context with the Act, reflect the understanding and commitment of businesses to ensure workplace safety, environmental protection and inclusive growth alongside financial returns.

LG Polymers India Private Limited vs Andhra Pradesh Pollution Control Board & Ors, 11327/2020 – The matter pertains to a gas leak in the Gopalapatnam region of Vishakhapatnam, Andhra Pradesh. A chemical reaction leads to the tank's heating up, which leads to the gas release, ultimately contaminating the air with the deadly gas. Such air contamination resulted in many casualties and caused respiratory and other nervous ailments to the people living in the vicinity of the establishment. Taking suo moto cognizance of the adverse impact of the gas leak, an immediate investigation was initiated, following which the National Green Tribunal imposed an interim penalty of Rs. 50 crore on LG Polymers India and further pursued a response from the Centre. However, the proceedings before the NGT were subsequently deferred by the Supreme Court whereby, LG Polymers was granted one last opportunity to file a response to the report issued by the monitoring committee.

Rambir Vs. Tirupati Gas Agency & 2 Ors, Revision Petition No. 1939-1940 of 2018 – Under the provisions of the Act, gas cylinders are insured, including any accident(s) thereto. In this case, there was a gas cylinder blast against which the petitioner sought relief under the Act. The District Court findings recorded that the fire had occurred due to the leakage in the gas cylinder, which was further supported by the reports of the fire brigade, the police authorities and the surveyor. However, the State Commission issued an impugned order on the assumption that the fire had occurred due to the bursting of the gas cylinder, thereby, setting aside the findings of the District Forum. Nonetheless, under the revision application filed by the petitioner, the National Consumer Disputes Redressal Commission observed that the views of the State Commission were based on conjecture and lacked substantial evidence. Therefore, its findings were set aside and the District Forum's Order was confirmed, which made the respondent liable to provide relief to the victim under the provisions of the Act.

Executive Engineer vs The State of Madhya Pradesh, WP-4433-2018 – The matter pertains to electrocution on the field which led to the death of the complainant's cow and whether or not relief could be sought for the same under the Act. Accordingly, the complainant made an application for relief and upon its subsequent investigation, the Collector awarded compensation to the aggrieved party for the loss of his cow under Section 8(2) of the Act. Thereafter, a petition was moved before the Court seeking a stay on the order of the Collector on grounds of illegality. However, the Court was of the view that the order of the Collector was justified as a measure of relief against the loss suffered by the complainant and thereby, the petition was dismissed.

Enacted under the pretext of the Bhopal Gas Tragedy, the Act stipulates a sense of social responsibility to facilitate and ensure adequate relief to the victims against any accident that occurs on handling hazardous substances. As the Act provides, the accident may occur due to misconduct, mismanagement, negligence or other reasons. However, the person in control of handling such substances is under an obligation to insure the establishment against adequate relief/ compensation for any casualty, injury or damage to personal or public property.

Under Section 2 of the Act, the Central Government has specified a list of hazardous substances along with the quantities, exceeding which every owner or person in control of handling the hazardous substances is required to undertake an insurance policy for compensation to be paid to those affected by any liability arising out of a chemical disaster. The list contains 179 hazardous substances which are as follows; 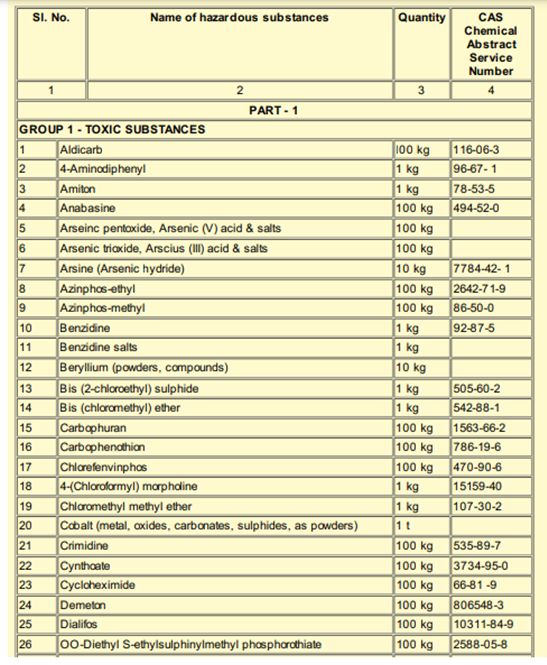 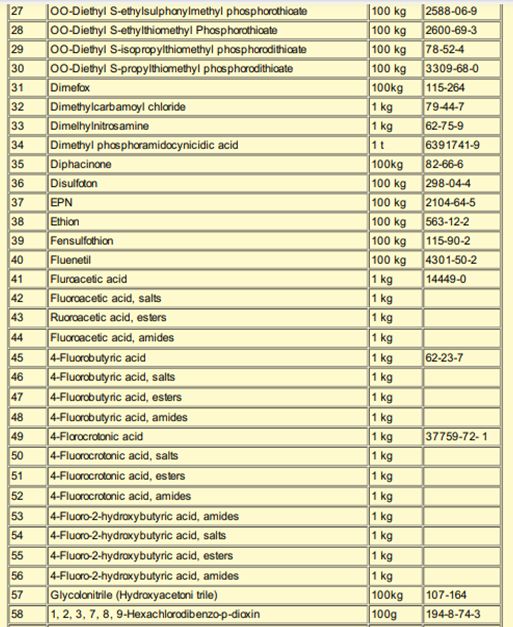 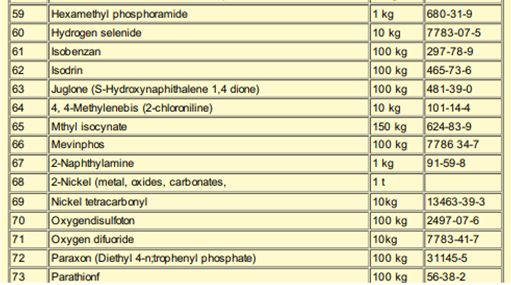 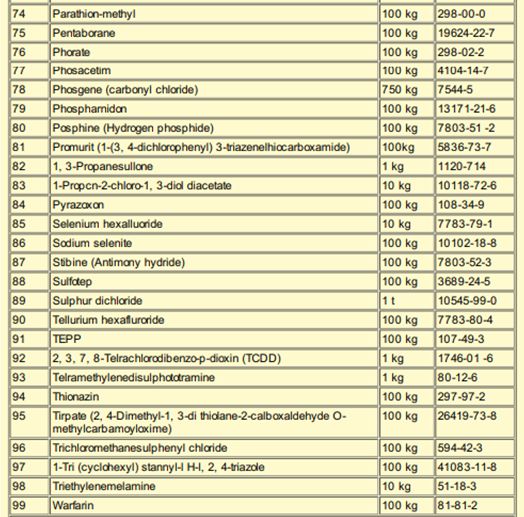 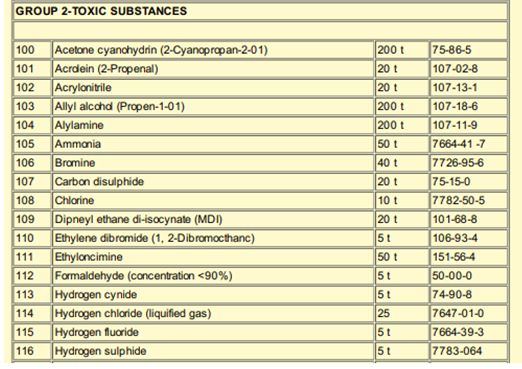 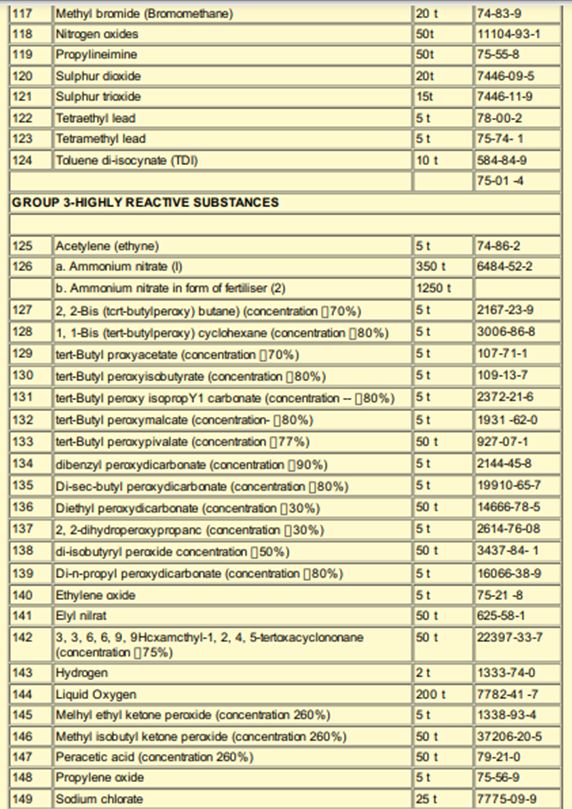 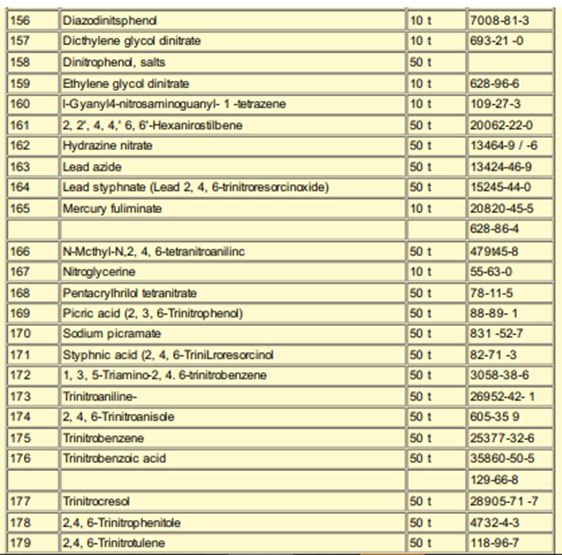