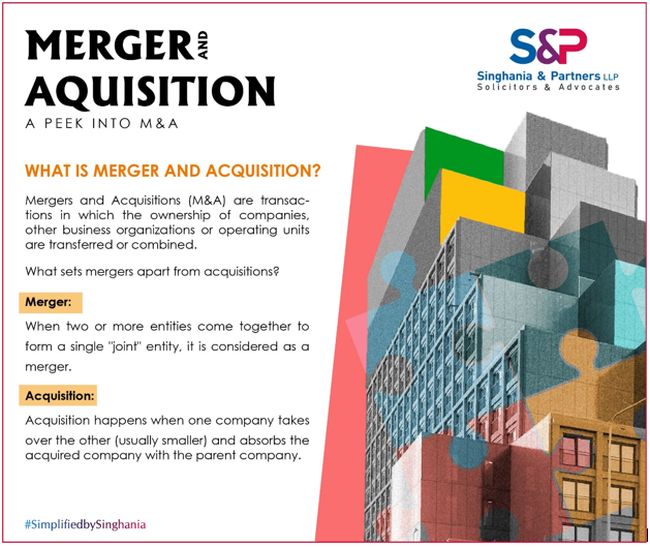 As the world enters into the era of globalization, significant changes are being observed across countries everywhere, in a way the companies across the world conduct business and strive to bloom. When a company decides to boost up its corporate performance and dominate the market sector in which it conducts its business, the thought of merging or acquiring a company that benefits both corporations can be extraordinarily seductive.

India recently recorded a deal-making spree of more than $82 million through M&A according to data compiled and reported by Bloomberg in June 2022. That is more than twice the previous record of $38.1 billion in the third quarter of 2019 despite significant geopolitical and financial challenges around the world. This makes M&A a hot topic of discussion not just in India but across the world.

What is Merger and Acquisition (M&A) ?

A merger happens when two companies (usually of similar size) combine to form a single entity.
In other words, it is a fusion of two or more companies whereby the identity of one or more is lost resulting in a single company.

An acquisition happens when a larger company acquires a smaller company and absorbs the smaller one. It is the purchase by one company of controlling interest in the share capital of another existing company. After acquisition, the management of both the companies change, but they retain their individual legal character. 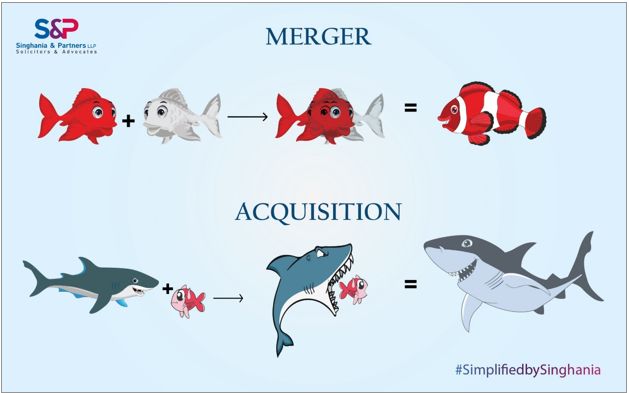 Takeover – a Friendly or a Hostile approach to Acquisition?

A takeover is simply the purchase of a company (target) by another (acquirer). It is a common practice that is achieved through mutual agreement or a hostile battle. Whatever it may be, the result is always a single company.

Generally, a big company acquires a smaller one that is struggling to sustain itself due to competition in the market. The acquirer analyses the target company and initiates a takeover after it believes that it can boost their business and make them profitable.

There is often confusion between a 'Hostile takeover' and a 'Friendly takeover' This has been addressed here in an uncomplicated manner.

Hostile Takeovers: This happens when the acquirer secretly buys the shares of non-controlling shareholders from the open market and gradually acquires the majority stake in the target company.

Friendly takeovers: This happens when the management of both firms approves the takeover and advises the shareholders to vote in favour of the deal. The management and stakeholders voluntarily agree to sell a significant share to the acquirer.

Example could be Tata's friendly takeover of 1Mg by acquiring a 60% stake for $230 million.

All mergers and acquisitions have the same primary goal: to create synergy between the merging companies. A synergy in this context means that they want to be more valuable together than the sum of the market values of their individual companies. The success of M&A is determined by whether or not this synergy is achieved. Through M&A the companies want to achieve the following:

M&A include a number of different transactions such as:

M&A is one of the most effective ways for businesses to go past some of their existing problems and develop and succeed in the market. Businesses that have undergone significant M&A restructuring, expanded operations, and other synergies have improved their competitiveness and established a global footprint. Next in this series of M&A, we shall look into some of the most common types of Mergers to understand the number of ways by which mergers between the companies are structured based on the relationship between the companies involved in the deal.