In a recent decision in the case of M/s Golden Bella Holdings Ltd v Deputy Commissioner of Income Tax (International Taxation), Income tax appeal number: 6958/MUM/2017, the Mumbai bench of Income Tax Appellate Tribunal (ITAT) examined the concept of 'beneficial ownership' in relation to interest income and held the taxpayer, a Cyprus company, to be the 'beneficial owner' of such income and accordingly eligible to a lower tax rate under the India-Cyprus tax treaty (Cyprus Treaty).

This ruling assumes significance as it is the first judicial pronouncement on the issue of 'beneficial ownership' of interest income from a tax treaty standpoint. To establish 'beneficial ownership', the key determinants which emerge from this ruling are (i) exclusive possession and control over the interest income received; (ii) no requirement for the recipient to seek approval or obtain consent from another person for making investment; and (iii) freedom to utilize the interest income received at recipient's sole and absolute discretion, unconstrained by any contractual, legal, or economic arrangements with any other third party. This ruling also highlights the criticality of burden of proof to be discharged by the revenue - the tax authorities were not able to prove non-existence of the aforesaid factors. At the same time, it does give taxpayers an insight into the extent of details looked at by the income-tax authorities in examining a claim of 'beneficial ownership'.

Under Indian tax law, interest income arising to a foreign company on rupee loans is subject to tax at the rate of 40% (plus applicable surcharge and cess); 5% applies in certain cases, subject to conditions. The tax treaties generally cap the tax rate on interest at a lower rate which is usually 10% or 15% (depending on applicable tax treaty), provided that the recipient is the 'beneficial owner' of the interest income. In the absence of a definition and lack of judicial precedents, the determination as to whether the recipient is a beneficial owner is fact based and to some extent subjective.

This case deals with a Cyprus taxpayer which was earning interest income from India (on debentures issued by an Indian group company). Under the Cyprus Treaty, the tax rate applicable to interest income is capped at 10% provided that the recipient is the beneficial owner of such interest income. M/s Golden Bella Holdings (Taxpayer) had a Mauritian parent company. For the year in question, the India – Mauritius tax treaty did not provide any benefit with respect to interest income and it was to be taxable as per domestic law (the current treaty caps the tax rate at 7.5%). 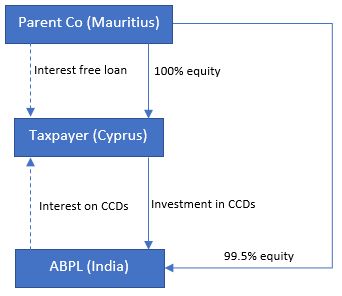 The Taxpayer had invested in Compulsorily Convertible Debentures (CCDs) of ADAMAS Builders Private Limited (ABPL), an Indian private limited company. A week before investing in the CCDs, the Taxpayer had received an unsecured interest-free shareholder loan from its parent company in Mauritius, M/s Green World Development Limited (Parent Co). The interest income earned on such CCDs was offered to tax by the Taxpayer at the rate of 10% by virtue of the beneficial provisions of the Cyprus Treaty.

The tax authorities denied the benefit of the Cyprus Treaty on the basis that the Taxpayer was not the beneficial owner of the interest income. Accordingly, interest income was taxed at the rate of 40% (plus surcharge and cess) under domestic law. This was based on the following observations:

- Given the back to back funding by the Parent Co, the Taxpayer merely acted as a conduit for the passage of funds;

- The CCDs were issued at a value which was 70% higher the fair market value of equity shares of ABPL;

- The Taxpayer did not carry out any business activities in Cyprus and was merely a 'name plate' company. It had outsourced its corporate secretariat and management function to an institutional service provider; and

- The Taxpayer did not exercise any dominion and control over the CCDs as most of the companies incorporated in Cyprus and other 'tax havens' do not have any independent office or qualified employees to carry out any business or investment activities.

The Taxpayer argued that the tax authorities disregarded its factual submissions and arrived at arbitrary conclusions without discharging the burden of proof which lies on the revenue. Following were the key arguments:

- The Taxpayer utilised a portion of its share capital and the interest-free loan from Parent Co for making investment in CCDs and it had also retained some cash balance after the said investment and therefore, it was not a mere back to back arrangement;

- Taxpayer was under no contractual, legal or economic compulsion to invest the funds received from the Parent Co in ABPL; but chose to do so of its own volition, after due deliberation and independent application of mind and approval by the Taxpayer's board of directors;

- The Taxpayer did not merely on-lend the funds received from Parent Co. The interest free shareholder loan was denominated in USD whereas funds in INR were invested in ABPL's CCDs which, unlike a pure loan, were convertible at a pre-defined ratio at a pre-defined point in time;

- The Taxpayer was actually a risk bearing entity and not a mere conduit for the passage of funds, as the interest free shareholder loan was denominated in USD whereas CCDs and interest income were denominated in INR; and

- While the interest free shareholder loan received by the Taxpayer was repayable on demand, the CCDs in ABPL were in effect blocked capital since they could not be repaid but only be converted into equity shares and hence, the transaction was not a mere back-to-back arrangement.

The ITAT ruled in favour of the Taxpayer based on the following observations:

- The Taxpayer invested in CCDs and received interest income thereon for its own exclusive benefit, and not for or on behalf of any other entity;

- The mere fact that the investment was funded using a portion of an interest-free shareholder loan and share capital does not affect the Taxpayer's status as the 'beneficial owner' of interest income, as the entire interest income was the sole property of the Taxpayer;

- The Taxpayer maintained the foreign exchange risk on the CCDs and the counter party risk on interest payments arising on the CCDs; and

- The tax authorities failed to prove that:

Notably, in the context of royalty income, the ITAT in DIT v Universal Music International B.V. (2011) 45 SOT 219 (Mum) had relied on CBDT Circular 789 dated 13 April 2000 to hold that TRC is sufficient evidence of beneficial ownership – this 'finding of fact' was not interfered with by the Bombay High Court [2013] 214 Taxman 19 (Bombay). This argument was raised by the Taxpayer also, but the ITAT did not comment on the same in this ruling.

Given the inherent subjectivity in the determination of beneficial ownership, the underlying facts such as group structure, substance in the entities, rights of the income recipient - whether such rights are unfettered by any contractual, legal or economic constraints and such facts being supported by underlying documentation would remain key. This case pertains to an earlier year when anti-abuse rules were not in force. Going forward, a more robust analysis may be warranted in similar circumstances in view of the wide anti-abuse rules under domestic law and 'Principal Purpose Test' under tax treaties as amended by the OECD's Multilateral Instrument.