by Nicholas Plowman
Ogier
Your LinkedIn Connections
with the authors

As offshore legal counsel based in Hong Kong, we commonly deal with the book ends of inbound private equity investment into the People's Republic of China ("PRC"), that being, the initial establishment of the offshore investment fund structure, typically structured as a limited partnership and domiciled in either the Cayman Islands or British Virgin Islands (the "PE Fund") at one end, and at the other, investments made by PE Fund's in certain offshore target entities ("Offshore Target"), indirectly holding strategic PRC assets which are subject to such acquisition. 1

The following tax driven acquisition structures of PRC assets have arisen from recent changes to the tax laws in the PRC which took effect from 1 January 2008. 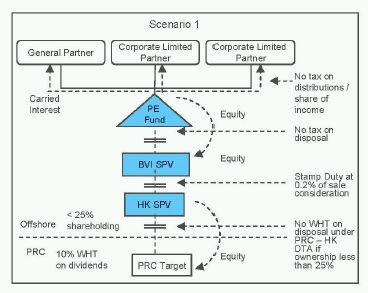 In scenario one, a minority investment has been made by a PE Fund in a PRC target. In this scenario, provided the Hong Kong Special Purpose Vehicle ("HK SPV") holds less than 25% of issued share capital of the PRC target entity, at the onshore PRC level there will be no withholding tax ("WHT") on any disposal of these shares by the HK SPV under the PRC-HK Double Taxation Arrangement which became effective on 1 January 2007, however there will be 10% WHT on dividends paid down by the PRC target to the HK SPV. At the Hong Kong level, stamp duty will be payable in the amount of 0.2% of any consideration paid for the sale of shares in the HK SPV by the British Virgin Islands SPV ("BVI SPV"). Any disposal thereafter shall not be subject to any tax at the BVI level. 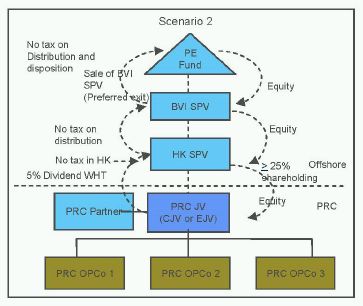 In scenario two, the PE Fund is electing to indirectly enter into a joint venture ("JV") arrangement with a PRC JV partner through either a PRC equity joint venture ("EJV") or a PRC cooperative joint venture ("CJV"). In this scenario, provided the HK SPV holds greater than 25% of issued share capital of the PRC target entity, it will be subject to a reduced dividend WHT treatment of 5% (reduced from 10%). Provided the BVI SPV owns 100% of the HK SPV, no tax shall be paid on any distributions at the Hong Kong or BVI level. In this context, ultimately the preferred exit for the PE Fund would be the sale or disposition of the shares in the BVI SPV. 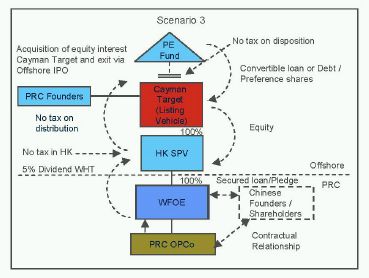 In scenario three, provided there is no round tripping of investment by the PRC founders (i.e. the classic "Red Chip" structure which now requires approval of the China's Ministry of Commerce ("MOFCOM") and registration with the State Administration of Foreign Exchange ("SAFE")), the PE Fund and the PRC founders will typically invest into the Offshore Target (typically a Cayman Islands exempt company for Hong Kong listing purposes), with the PRC founders holding ordinary shares and the PE Fund being issued Preference Shares (discussed below). If newly established, the Offshore Target will require MOFCOM approval as well as SAFE registration if it has PRC domestic investors. In order to avoid these regulatory hurdles, there have been more recent structures established whereby the Wholly Foreign Owned Enterprise ("WFOE") does not acquire equity interests in the PRC operations company, but rather relies on certain contractual arrangements between the PRC founders and the WFOE. The tax advantages to this structure are that there will be reduced dividend WHT of 5%, assuming the HK SPV owns 100% of the WFOE. There will also be no Hong Kong tax paid on distributions made by the HK SPV, assuming central and management and control of the HK SPV is held outside of Hong Kong, nor any Cayman Islands taxation on any disposition by the Offshore Target to the PE Fund.

Under the Circular, an indirect transfer occurs when an offshore company (Company A) sells the equity in its offshore holding company (Company B), which owns shares of a Chinese tax resident enterprise (Company C), to another non-Chinese tax resident enterprise (Company D) located outside of China (i.e. any of the scenarios contemplated above). A direct transfer is when Company C is sold.

What Obligations will be Imposed on Company A?

If Circular 698 is triggered, then Company A is obligated to report this transaction to the Chinese local tax bureau (where Company C is located in China), within 30 days of the transfer and provide that tax bureau with the following documents:

After reviewing the documents described above to determine the true nature of the transfer, the Chinese tax authorities may conclude that Company A (the non- Chinese tax resident enterprise) was abusing the offshore structure to avoid Chinese tax liability without a reasonable business purpose. If the Chinese tax authorities reach that conclusion, they may disregard the existence of Company B based on the "substance over form" principle. If the existence of Company B is disregarded, then the transfer will be treated as a non- Chinese tax resident enterprise (Company A) transferring equity of a Chinese investee company (Company C). The gains from such a transfer will be regarded as China sourced and will be subject to the Chinese Enterprise Income Tax.

Circular 698 states that all foreign entities are obligated to submit the documents described above to the Chinese tax authorities if there are indirect transfers of Chinese tax resident enterprises and such transfers are made in low tax or no tax jurisdictions. However, the term "indirect transfer" has not been defined. The danger of not defining this term is that reporting obligations may be imposed on any international M&A transactions involving transferring parties located outside of China which indirectly hold equity interests in China, no matter how small the transfers are. For example, Company B owns 100% of Company C through many levels of intermediary holding companies in many different jurisdictions, and Company Y, a non- Chinese tax resident enterprise, purchases all of the issued share capital of Company B from Company A. Circular 698 may still apply to this case, and if so, it would require documents explaining the relationship at each level. In other words, the scope of "indirect transfer" could be very broad, and the application of that phrase could subject a wide range of transactions to reporting obligations.

As described above, if the tax jurisdiction of Company B imposes low or no tax on Company A, then it would trigger the application of Circular 698 to Company A. This would mean that Company A may have a tax liability in China. However, if Company A's home jurisdiction imposes a tax liability on Company A, then there is a possibility that Company A could be subject to double taxation. The SAT has recognised this double taxation problem and established mutual arrangements on tax rights with certain offshore jurisdictions. Advisors should be cognisant of these arrangements when determining which domicile should be utilised in an M&A transaction (albeit that this may well not be the determinative factor in electing such domicile).

Circular 698 should be viewed as a fundamental change in the taxation of offshore equity transactions in China. Although there are still some unclear issues with respect to Circular 698, foreign enterprises which have invested in Chinese tax resident enterprises through offshore companies are advised to review their existing structures and make necessary revisions to accommodate for Circular 698. Moreover, because Circular 698 applies retroactively from January 2008, it is recommended that foreign investors review their activity over the past two years with Circular 698 in mind and be aware that Chinese tax authorities may challenge such transactions.

Book end two: Structuring the Offshore Target at the time of investment

In the context of scenario three, there are various instruments available to a PE Fund through which to secure its investment in an Offshore Target including convertible preference shares ("Preference Shares"), convertible or exchangeable debt, warrants and/or options. For PRC investments, the favoured investment instrument for PE Funds is the acquisition of Preference Shares in an Offshore Target.

(i) Dividends Preference Shares shall be afforded preferential rights in relation to any dividends payable in cash or in kind to the PE Fund, based on certain agreed preference thresholds. Generally, dividends are not paid during the life of PE Fund's investment in the Offshore Target.

(ii) Liquidation Preference Preference Shares will typically be afforded down side protection with regard to any payment of liquidation proceeds by the Offshore Target. This will typically be based on a multiple of the initial acquisition price of the Preference Shares. It is key to ensure that the trigger for the liquidation preference is defined broadly enough to consider not only preferred liquidation rights for the PE Fund in the event the Offshore Entity is wound up, but also preferred rights in any proceeds resulting from the sale of assets by the Offshore Target, or its merger which will in turn provide upside protection for the PE Fund.

(iii) Conversion Rights Preference Shares will also be afforded conversion rights which allow the PE Fund to convert its holding to common shares in the Offshore Target. Anti-dilution provisions are necessary to ensure that the PE Fund does not suffer any shareholding, economic or price dilution on conversion. Of fundamental importance is the price adjustment mechanism employed to determine the value ascribed to the converted shares, with a weighted average conversion price adjustment mechanism generally providing a better outcome for the PE Fund.

(iv) Redemption Preference Shares will generally attach a right of redemption. Usually a PE Fund's right to redeem its investment from the Offshore Target will be characterised by an agreed mandatory redemption triggered by the happening of a specified event, such as a failure to IPO within an investment timeframe. A frequent issue faced by a redeeming PE Fund is what remedy is available in the event the Offshore Target fails to honour the redemption. Generally speaking, the remedies available to the PE Fund are limited to rights afforded in the M&A, given the PE Fund will not be deemed a creditor in this context.

1 Ogier's role is specifically limited to the offshore legal aspects of any private equity transaction and it does not provide Hong Kong or PRC legal or tax advice.