Germany: The Incoming German Government's "Coalition Agreement" And The Focus On ESG: A Real Move Forward?

Two months following the German election, three political parties have agreed to form a so-called "trafficlight" "Ampel" coalition representing their political colors: red for the social democratic center-left party, the Socialist Party of Germany (SPD), who will hold the chancellorship, yellow, for the center right liberal Free Democratic Party (FDP), who are expected to hold the Finance Ministry and green for the center left green party, the Bündnis 90/Die Grünen (the Greens), who will, amongst other appointments, hold the Environment Ministry.

This new coalition government published on 24 November its goals for the 2021-2025 legislative period in a 178-page coalition agreement1 , which bears the title "Dare for more progress - an alliance for freedom, justice and sustainability." In that document, it is clear that the traffic light is set to green with an ambitious pace for legislative and non-legislative reforms - but what are their concrete plans with regard to ESG and also sustainable finance?

During the election campaign, sustainability was already one of the most prominent topics in election manifestos. Unsurprisingly, climate policy was particularly emphasized by the Greens. However, the prominence of this topic was never questioned by the other parties, including the SPD and FDP.

Climate change is in the media always referred to with expressions such as "the greatest human task of our time". This formulation already hints at the enormous efforts involved in tackling this task. While the new German government's ESG priorities may have a national focus, the coalition agreement's general pro-European agenda, means that domestic efforts, will have a bearing on the direction of EU policymaking in Brussels - including beyond the EU's Green Deal.

The complexity of the issue

The coalition agreement starts with the topic "Modern state, digital awakening and innovations". The second set of topics is entitled "Climate protection in a social-ecological market economy". However, any review of the coalition agreement is quickly drawn to the topic in the preamble, where the Paris climate protection targets are clearly referred to once again and a clear commitment is made to the 1.5-degree Celsius target. Furthermore, carbon neutrality is a goal that is set to be achieved by 2045 at the latest. This marks a compromise amongst the Greens who, in their electoral manifesto2 , had advocated for such a goal to be achieved by 2040, the FDP who had set a goal for 2050 and the SPD that had pushed for 2045. The coalition agreement also supports full delivery of the EU's "Fit for 55" program.

Another important topic, which is also directly addressed in the preamble of the coalition agreement, is the phase-out of coal and coal-fired plans. Ideally, this should be completed by 2030 - down from 20383. What exactly is meant by the term "ideally" in this context remains open. Although it is made clear in the chapter on the coal phase-out, particularly with regard to the vagueness of the phrase "ideally," that there is actually no real alternative to an early coal phase-out due to the decision of the German Federal Constitutional Court on climate targets4 and the plans set out in existing or forthcoming EU regulations. Consequently, a clear commitment to a definitive phase-out of coal by 2030 remains open. With coal and nuclear on the out, the new German government envisions that renewable energy sources will grow to meet 80% of electricity demand, up from a previous target of 65%. Major investment in new and upgrading existing wind and solar power projects are planned.

The coalition government has also agreed to speed up its hydrogen policy during 2022 so as to become a leading market by 2030. Germany's hydrogen policy was set under the previous Merkel chancellorship as a means to advance hydrogen-based decarbonization. On the path to 2030 natural gas fired plants are expected to be "indispensable for the transition period" until new hydrogen-powered plants are available.

As part of this move on hydrogen as well as stepping up the shift to other renewable energy sources, the coalition is seeking to secure more private capital for domestic transformation projects. In order to deliver that transition, the German State-owned development bank, KfW will have its mandate strengthened so as to support innovation and investment, notably in those projects that qualify under the EU's program to support "Important Projects of Common European Interest".

1 The full version of the coalition agreement is available here.

2 An overview of the various pledges in the electoral manifestos on Climate Policy is available here: 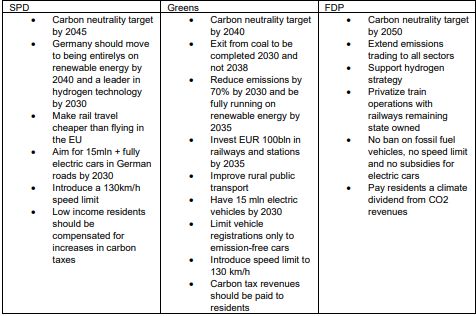 3 In 2020, it was estimated that about 25% of Germany´s electricity production came from thermal coal. Germany´s exit plan from coal was agreed in 2020 and included compensation and support payments for existing operators and regions worth about EUR 400 billion.

4 The full version of the decision is available here.