by Brizida Alani
CONVINUS
Your LinkedIn Connections
with the authors

On 11 June 2020, the State Secretariat for Economic Affairs SECO published the reports on the implementation of the accompanying measures (FlaM) and the Federal Act against Illegal Employment (BGSA) in 2019. The accompanying measures concern the implementation of the provisions of the Agreement on the Free Movement of Persons between Switzerland and the EU in the context of postings to Switzerland. This concerns the monitoring activities of the enforcement bodies with regard to compliance with the working and salary conditions of foreign employees. For those areas in which there is a valid generally binding collective labour agreement (CLA), the joint commissions are responsible, and for the rest of the labour market, the cantonal tripartite commissions are responsible.

The increase in the number of short-term jobs started with Swiss employers, were mainly due to the agricultural sector (+7.2%, 1233 persons), the hotel and restaurant industry (+5.2%, 985 persons) and the personnel leasing sector (+2.3%, 874 persons). From a cantonal perspective, the majority of shortterm job openings are in the cantons of Zurich (14.0%), Geneva (11.5%), Vaud (9.1%) and Ticino (8.6%). This year , the Canton of Valais recorded the largest increase in short-term job applications with Swiss employers, with 16.3% in the areas of agriculture and personnel hire. After two years of decline, the number of posted employees rose again in 2019. The origin of the posted employees has not changed in the composition of the countries of origin. The largest group of posted employees comes from Germany with 47.5%, followed by Italy with 16.5%, France with 9.3% and Austria with 6.9%. Posted workers from Bulgaria, Poland, Romania, Hungary, Slovakia and Czech Republic account for only 8%. Most of the secondments take place in the manufacturing sector with 33.7% and in the ancillary building trade with 26.3%. 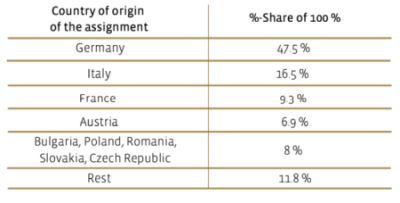 The Law on Posted Workers (EntsG) forms the legal basis for the accompanying measures. In addition, there are the generally binding collective employment agreements and the enactment of standard employment contracts. The aim of the accompanying measures is to comprehensively monitor the Swiss labour market, and to control the working and wage conditions of Swiss employers and companies that employ them. The aforementioned executive bodies, namely the parity and tripartite commissions, have SECO as their supervisory authority, which determines the qualitative and quantitative requirements of the supervisory bodies. Based on the legal obligation in the law on the posting of officers, the canton pays 50% of the remuneration, and the Confederation and SECO pay 50%. The joint commissions receive a lump sum of CHF 650 for each inspection and are financed with an hourly rate of CHF 100 for special inspections.

The minimum national target for checks is set at 35,000 per year. The controls between the different categories of employees are risk-based, reflecting the intention to increase controls on posted workers who are most affected by the pay gap between Switzerland and EU/EFTA countries (e.g. Italy, Poland, etc.).

In current practice, 30-50% of all posted workers and self employed service providers subject to declaration are checked. In contrast, only 3% to 5% of all Swiss employers are subject to controls.

The results of the labour market inspections in 2019 have exceeded the national minimum target of 35,000 inspections per year. In 2019, 41,305 checks actually took place. As expected, 29% of the reported delegates and 8% of all Swiss employers were checked.

The most controlled sectors without a generally binding CLA, with a control volume of more than 57% compared with the previous year, are business services (banking, insurance, real estate and IT). In 2018, the labour inspectors focused on the retail trade and in 2017 on the health sector, which is why the breakdown by sector varies from year to year. Although the volume of inspections in the retail sector has been reduced, inspections in this area remain intensive and at a high level. The level of undercutting fund ?? has remained constant at 11- 13% over the last four years, i.e. from 2014 to 2018. The same rate for Swiss employers also remained stable at 7%-8% over the same period. The most controlled sectors with generally binding CLAs are the ancillary building trade and the manufacturing industry, in which the number of posted employees and self-employed service providers is also highest. The volume of inspections was highest in the Canton of Ticino, with 60% of all inspections.

The majority of posted employees and self-employed service providers work in the ancillary building trade and manufacturing industry. Hence, most checks on postings in these sectors are carried out under generally binding CLAs. The rate of infringements of the minimum wage regulations has increased slightly by 1%, i.e. from 20% to 21% for companies and from 21% to 22% for individuals. Overall, there has been a decline in the number of checks carried out, mainly in the four following areas: metalworking, carpentry, woodworking and building services. Despite the decline, these four sectors have the highest number of inspections carried out. In these sectors 59% of the sending enterprises were checked. In the case of secondments in sectors without a generally binding CLA, the volume of checks has fallen slightly. However, the number of infringements has remained constant. The majority of checks in 2019 were carried out in the manufacturing sectors (55%), business services (finance, real estate and business services) (21%) and ancillary building trades (15%). The wage undercutting rate for secondments was 15%, with the Canton of Ticino leading the way with the highest cases. Among the self-employed, the checks were most frequent in the manufacturing and ancillary building trades. These sectors also recorded the largest proportion of bogus self-employment (43%). One third of pseudo self-employment occurred in the cantons of Ticino and Basel-Land. In 2019, 610 fines, 71 interruptions of work and 272 suspensions of services were imposed due to the documentation obligation to prove self employment.

The mutual agreement procedures between law enforcement bodies and controlled persons is at a very high rate of 84%. However, the cantons also distributed 2,503 fines and 931 service suspensions for Switzerland. The canton of Ticino imposed the most fines and service blocks, followed by Bern, Zurich and Aargau. Only the Canton of Geneva did not impose any fines at all.

In conclusion, the implementation of the accompanying measures in 2019 was a success. The control objectives of the cantonal enforcement bodies have largely been achieved. The protection of wage and working conditions is thus assured. Nevertheless, optimisation projects for 2020 are on the agenda, in particular the revision of the law on the posting of workers in the sense of compliance with cantonal minimum wages by posting companies (motion 18.3473 Abate).

ARTICLE TAGS
Switzerland Employment and HR Contract of Employment Employee Benefits & Compensation Finance and Banking Financial Services Immigration General Immigration
POPULAR ARTICLES ON: Employment and HR from Switzerland
Employment Essentials September 2022: Top 10 Recent Developments In Employment Law
Gowling WLG
As the furlough scheme was not an available option for every employer during the pandemic, some employers put in schemes to support employees who, ...
Global HR Law Guide
lus Laboris
Broadly, what are the minimum legal standards that an employer must meet to ensure the safety of employees? How are health and safety rules regulated and enforced in practice?
"Fanciful" Doctor's Victory In Unfair Dismissal Claim
Herrington Carmichael
The handling of whistleblowing complaints by employers has been highlighted in the recent case of Mr Kumar and the Care Quality Commission ("CQC").
"Off The Record?" Covert Recordings In Employment Disputes
Walkers
We have seen a number of cases recently in Jersey and Guernsey where issues relating to covert recordings have arisen. Historically, employers have been reluctant to...
German Federal Labor Court Announces Mandatory Recording Of Working Hours In Germany
Littler Mendelson
On September 13, 2022, the German Federal Labor Court published a decision (Case No. 1 ABR 22/21) with important ramifications for employers. The court held that it is (and has always been)...
The State Funeral And Bank Holiday: Implications For Employers
Lewis Silkin
There are no specific legal requirements in relation to the period leading up to the funeral itself, but employers may receive requests for annual leave from employees wanting to travel to London.
FREE News Alerts
Sign Up for our free News Alerts - All the latest articles on your chosen topics condensed into a free bi-weekly email.
Register For News Alerts
Article Tags
Switzerland Employment and HR Contract of Employment Employee Benefits & Compensation Finance and Banking
Financial Services Immigration General Immigration
More Tags
Similar Articles
Powered by mondaq AI
MATCH
49%
Main Aspects Of Posting Employees To Switzerland Altenburger
Related Articles
Employer Of Record (EOR) – Overview And Legal Pitfalls Baer & Karrer
Main Aspects Of Posting Employees To Switzerland Altenburger
Labour and Employment Comparative Guide Wenger Plattner
Coronavirus: Certificate Control Also In The Workplace? Walder Wyss Ltd.
Social Security Relations With The United Kingdom Envoy Global, Inc.
Mondaq Webinars
Future Series: Cybersecurity and Ransomware Trends
Fasken
Employer Responsibilities and Employee Rights in Australia
People + Culture Strategies
More Webinars
Comparative Guides
Alternative Investment Funds
Anti-Corruption & Bribery
Artificial Intelligence
Cartels
Corporate Governance
More Guides
Mondaq Advice Centres
Global
Trademarks in SAARC Countries
More MACs