Cyprus and the UAE have been close partners since the start of their bilateral relations in the 1960s. Their relations have been marked throughout the years by mutual respect and understanding of each other's independence, sovereignty, and culture, with special emphasis on trade and commerce.

This publication outlines the business landscape between Cyprus and UAE, in the context of the Cyprus-UAE Double Tax Treaty (the "DTT"), the benefits investors stand to gain via the use of Cypriot companies as holding, financing and/or licencing entities and also how the use of a Cyprus International Trust can enhance wealth protection and maintenance.

Following the trend of strengthening of economic ties between the two countries, an inaugural double tax treaty for the avoidance of double taxation was signed between Cyprus and UAE on 27 February 2011, which became effective as of 1 January 2014.

The main features and rates of the DTT are set out in the table below. Note that these rates relate to payments made from UAE to Cyprus as, with respect to payment from Cyprus, in accordance with Cyprus tax legislation, there are no Cyprus withholding taxes on payments of dividend, interest or royalties not used in Cyprus towards non-Cyprus residents.

Cyprus tax legislation provides for numerous tax advantages that greatly enhance the tax efficiency of structures at the Cyprus level. In addition, Cyprus' tax and legal systems are in compliance with EU and OECD requirements, which means that Cyprus is included in the 'White List' of international cooperative jurisdictions. Key features of the Cyprus tax system are the following:

In the new world we are living in of globalisation and exchange of information, 96 separate tax jurisdictions (55 early adopters and 41 late adopters) have decided to proceed with the exchange of information with respect to the beneficial owners' bank accounts balances (and the ones of the entities beneficially owned by him that are classified as 'passive' entities) from 1st January 2016 and 1st January 2017 respectively and with reporting dates 31st March 2017 and 31st March 2018 respectively.

The UAE has committed to implement the CRS, with the first exchange to take place by September 2018, therefore for UAE-resident beneficial owners having bank accounts in Cyprus, information will be exchanged to the UAE tax office in case entities holding such accounts as classified as 'passive'.

It is strongly advisable to closely monitor any changes in the CRS Reporting standards in order to be able to swiftly reach and consider the structures already in place with a view to maintain tax efficiency.

A non-Cypriot owner can be a UAE tax resident where he will receive dividends back to UAE or can leave profits to accumulate at the Cyprus level, or indeed may choose to become a non-domicile resident and enjoy the numerous tax advantages afforded by such status (see below for more information).

7 Use of Cypriot companies in back-to-back financing structures

The typical structure would be for a Cypriot company to be (i) a subsidiary of a foreign company incorporated in a zero / very low corporate income tax jurisdiction (e.g. Seychelles, BVI) and (ii) the parent of the operating / investment company. A loan from the parent offshore company was passed to the Cypriot company and then on to the operating company with respective interest received.

On 30 June 2017, the Cyprus tax authorities issued a circular (the "Circular") revising the transfer pricing framework for companies carrying out intra-group financing activities in Cyprus. The Circular is effective from 1 July 2017 and replaces the minimum margin scheme which was introduced back in 2011 (the minimum margin scheme provided guidance as to the minimum margin / spread the Cyprus tax authorities accepted for back-to-back loans, with acceptable net financing margins ranging from 0.125% to 0.35% per annum, depending on the amount under the loans).

The new Circular provides guidance in terms of substance and transfer pricing requirements to back-to-back financing transactions in line with the OECD Guidelines, as well as for guidance on the required content of a transfer pricing study substantiating the arm's length level of the financing margin earned by a Cypriot company.

However, a simplified process may be followed for group companies exercising a purely intermediary financing activity given that the transactions entered into by such group financing companies will be considered as compliant with the arm's length principle if such group companies obtain a minimum return on the assets financed after tax of at least 2%. To be eligible to simplified measures Cypriot companies of the group must have sufficient level of actual presence in Cyprus. Simplified measures are also available to certain regulated entities (financial institutions). A return on equity of 10% would be considered as compliant with the arm's length principle for the eligible regulated entities.

The transfer pricing analysis should be prepared by a transfer pricing expert (usually a suitably trained auditor). It is very important for UAE business groups with Cyprus-based financing companies to assess the implications of the new Circular on their intercompany transactions and financial structures in Cyprus and/or consider alternative financing structures via Cyprus.

Back-to-back financing – is it beneficial now as a structuring tool?

Given the implementation of the Common Reporting Standards and Automatic Exchange of Information, the passive nature of interest income effectively negates the benefits gained via the use of back-to-back structures for most beneficial owners. This is also true for UAE so such structures may be effectively shifted into either using the non-domicile tax residency or via the notional interest deduction rules (see further details for both, below).

An investor can keep all the benefits of using this structure if he/she considers relocating to Cyprus, becoming a Cyprus tax resident and utilising the tax advantages gained by the recently adopted non-dom regime, which include:

The implementation of the Notional Interest Deduction ("NID") rule in Cyprus since July 2015 has created a powerful tool to local and international organisations seeking new options to finance their operations. By using NID, businesses have the opportunity to deleverage and realise a new, tax efficient return on new equity, via the deduction of a 'notional' interest expense against their taxable income.

Equity financing in Cyprus can therefore constitute a very useful alternative to debt financing (thus avoiding the use of, now inefficient, offshore financing parents of the Cypriot company). The use of NID can achieve effective tax rates in Cyprus of up to 2.5%.

The NID rate is equal to the higher of:

The NID rule works as follows:

IP is undoubtedly a very valuable asset of most businesses. Thus, choosing the appropriate regime and location for structuring the exploitation of IP assets is paramount for businesses striving to achieve business development, effective IP protection and maximum tax optimisation.

In Cyprus, the net royalty profits are subject to 12.5% corporation tax and any gains from the sale of shares of the Cypriot royalty company are totally exempt from tax. In addition, under new tax incentives implemented in Cyprus, provided the majority of the actual work for developing the IP takes place in Cyprus:

Furthermore, royalty payments are exempt from withholding taxes in Cyprus provided that the rights are exercised abroad and not in Cyprus.

Cyprus International Trusts ("CITs") can be created under an enhanced and re-developed legislative framework which was enacted in Cyprus in recent years. They are very powerful and efficient tools for wealth management but also crucially for wealth protection and preservation. For example, the assets settled under a CIT are shielded from interference by actions and events such as divorce, death / inheritance issues and separations. CITs are also exceptionally useful for the purpose of passing down assets for the benefit of future generations and the management of these assets in various, tax-beneficial manners.

There are a number of features of a CIT which make it a highly desirable vehicle for wealth management and wealth preservation: 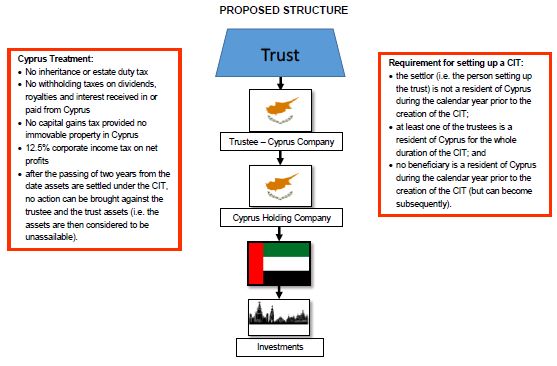 In July 2017 the Cyprus Parliament voted for an amendment to the definition of "resident of the Republic" for individuals as such term is defined in Cyprus Income Tax Law. The amendment has a retrospective effect and is effective as of 1 January 2017.

This change is introducing a new, second test for establishing an individual's tax residency in Cyprus. Previously, the only condition that an individual had to satisfy in order to be deemed as a tax resident, was the requirement of physical presence in Cyprus for an aggregate period of 183 days or more during a tax year. Following the amendment, a new '60 day rule' is introduced which allows individuals who satisfy the below criteria to be considered 'residents of the Republic'.

Under the new, additional rule an individual can also acquire tax residency in Cyprus if he/she meets all of the following criteria:

It is evident that Cyprus offers one of the most attractive tax regimes in the world.

With an extended network of double tax treaties, one of the lowest corporation tax rate in the European Union and a very competitive regime on dividends, interest and royalty payments, Cyprus is an obvious and ideal choice for international group structures and high-net worth individuals.

Cyprus also enjoys a unique geographical location in the south-eastern part of Europe and at the crossroad of three continents thus giving it an unparalleled ability to act as a gateway to and from Europe, the Middle East, Africa and Asia.

The Cyprus-UAE DTT confirms the ever closer cooperation between Cyprus and UAE and the magnified investment opportunities that exist between the two countries.

1. Qualifying equity is generally equity contributed (in cash or in kind): (i) as from 1 January 2015 in the form of paid up share capital of share premium; or (ii) pre-existing shareholder reserves which are converted into share capital.