This is a joint article with the company T.P. Alfa Services

The Cyprus Parliament has introduced new legislation on Transfer Pricing in an aim to comply with action points 8-10 "Aligning the Transfer Pricing Outcomes with Value Creation" of the Base Erosion and Profit Shifting (BEPS)initiative.

This tax brochure will provide an analysis on the new legislation providing insight as to who is obliged to maintain and report the transactions performed between associated enterprises, what should be maintained and reported and what are the penalties for incomplete, late or no submission of the relevant information if requested by the Tax Authorities.

B. WHO IS CONSIDERED RELATED PARTY UNDER THE UPDATED ARTICLE ON ARM'S LENGTH PRINCIPLE.

According to Article 33 of the Income tax law if:

are considered related parties and any transactions between them should be at arm's length.

The above should be applied and interpreted base on the OECD Transfer Pricing Guidelines.

For legal persons, a company is connected to another company:

According to the law, a documentation file must be maintained on intragroup transactions performed between:

The documentation file must consist of the Master file and the Cyprus Local file and should be accompanied with the summary table of transactions.

The summary table should be submitted to the tax authorities together with the tax return for a given year.

The auditor of the company, must review Cyprus local file to ensure its quality by the deadline of submission of the corporation tax return for the tax year in question.

The documentation file should be maintained in Cyprus for six years and must be provided to the Tax authorities within 60 days from the date that relevant request has been received by the company or any other company that is authorised by the company to act as its representative.

It must also include a special chapter explaining the events affecting the information and data included in the documentation file and are related to changes in the market conditions.

The documentation file must be updated every tax year and the update must be completed within 12 months from the end of the tax year in which the need for update has aroused.

The Commissioner of Tax has the power to determine specific issues of updates that are deemed necessary regarding the content of the documentation file either on an annual or permanent basis.

The Commissioner of Tax will issue further guidance as to the requirements of the documentation file and the summary table, the acceptable transfer pricing methods and the methods of establishing the interquartile range or the profit margin.

The obliged entities (as listed in section C of this report) with accumulated intragroup transactions per category, equal or below the amount of ?750.000 per tax year, based on the arm's length principle, are exempt from the obligation to maintain the Cyprus Local File.

Such companies, are also notobliged to maintain the Master file, provided that they are not the Ultimate Parent Company or Surrogate Parent Entity as defined in the Law on administrative cooperation in the field of taxation.

The companies that based on the above paragraph are not obliged to maintain the Cyprus Local File, are exempted from the obligation to submit the summary table as well.

An APA is an agreement between the tax payer and the tax authorities in which the tax payer requests the approval of the authorities as to the methodology that will be used to price specific future or existing cross-border transactions with related parties to be considered at arm's length.

In order for companies to be eligible to submit an APA to the tax authorities in Cyprus, they should be:

In more detail, the objective of the APA is to establish an appropriate set of criteria which will be used to set the prices of intragroup transactions applicable at a specific period of time.

The abovementioned criteria include:

The APA will be examined by the Commissioner of Taxation who will decide whether to accept or reject it. The decision should be communicated to the taxpayer within 10 months (up to 24 months provided that the taxpayer has been notified) from the date of submission of the APA. An APA is applicable for a maximum period of 4 years and the APA is not applicable to a tax year that has lapsed before the time of submission of the APA.

Where the APA includes a request of consultation with the tax authorities of other states with which Cyprus has a Double Tax Treaty in place (bilateral or multilateral APA), the taxpayer must submit the same request with all the supporting documents to the foreign tax authorities as well. In this case, the Commissioner of Taxation may hold consultations with the foreign tax authorities using the Mutual Agreements Procedures (MAP) provided in the Double Tax Treaty concluded between the contracting states.

The formal exchange of views between the competent tax authorities shall take place in the form of an exchange of position documents which shall be made available to the applicant in accordance of the provisions which restrict and prohibit the use of information contained in an international agreement to which the Republic of Cyprus is a party and the provisions of the EU law.

When an APA is agreed, the prices of the intragroup transactions will be considered at arm's length provided that they follow the APA details on pricing. During the tax review, the authorities will only ensure that, what is agreed in the APA has been followed during pricing the transactions and that the assumptions, circumstances and terms on which the APA is based are still applicable.

The documentation relating to the APA must be maintained by the company for the period that is obliged to maintain books and records for each tax year that the APA relates to.

The APA may be revised during the period for which it applies in case where the tax payer requests so or after a request by the Commissioner of Taxation if:

The revised APA will be applicable from the date of issue of the revised version until the end of the period of the APA that was initially agreed.

The APA may be recalled by the Commissioner of Taxation during the period in which is active:

In case where the APA is recalled, it is considered as never been issued in the first place.

The APA may be cancelled by the Commissioner of Taxation during the period in which it applies:

The Commissioner of Taxation is not allowed to cancel the APA, if it is possible to revise the APA (as mentioned in the revision paragraphs above). However, in case where the APA has been cancelled, the validity of the APA ceases from the date indicated in the decision of cancellation document

Failure to comply with the reporting requirements entails heavy penalties, depending on the reasoning for such failure, as indicated in the table below: 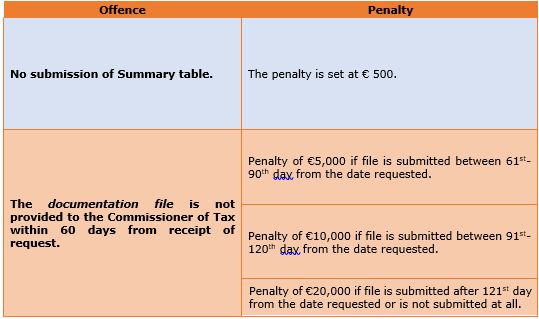 In order to be compliant with the provisions of the new legislation a company must:

TP ALFA SERVICES LIMITED can assist you in the following ways: