by Gary S. Wigmore (New York) , Jacqueline Chan (New York) and Andrew Compton (New York)
Milbank LLP
Your LinkedIn Connections
with the authors
To print this article, all you need is to be registered or login on Mondaq.com.

With the recent opening up of the Myanmar economy, there has been a rush of activity from companies around the world to this dynamic new market. As these entities have evaluated investment opportunities in Myanmar, they have also sought to identify suitable local partners for their business ventures. The recent Foreign Investment Law contemplates that investments in certain industries can only be made in conjunction with a local Myanmar partner. In addition, many new entrants to the Myanmar market have taken a view that it is prudent to include a local partner in Myanmar ventures to ease startup and country risks associated with this frontier economy.

We set out in this client alert several key legal and commercial considerations that may be of interest to global companies and financial institutions that are preparing to establish joint ventures with a local partner in Myanmar.

The identity of the Myanmar-registered "local" partner is one to be considered seriously. While Myanmar itself has recently emerged from the shadow of a robust international sanctions regime, U.S. sanctions are still applicable to a number of Myanmar nationals and their business activities.

In recognition of recent reforms enacted by Myanmar's government and in order to encourage further economic modernization and political reform, the U.S. in 2012 and again this year eased certain of the Myanmar sanctions. Specifically the U.S. Department of the Treasury, Office of Foreign Assets Control ("OFAC") issued exemptions to the Myanmar sanctions in the form of General Licenses Nos. 16, 17, and 19 that generally permit U.S. persons to engage in the following activities that were originally prohibited:

Notwithstanding the authorizations provided under the general licenses referenced above, U.S. persons remain prohibited from engaging in any activities in Myanmar or with a Myanmar person that would involve an individual or entity whose property and interests in property have been blocked by the United States. The names of such persons are published by OFAC on its Specially Designated Nationals and Blocked Persons List (the "SDN List").1 With certain exceptions, U.S. persons are prohibited from transferring, paying, exporting, withdrawing, or otherwise dealing in the property and interests in property of an individual or entity listed on the SDN List, as well as any entity in which an individual or entity listed on the SDN List owns an interest, directly or indirectly, of 50% or more, regardless of whether such entity is separately identified on the SDN List.

As such, to the extent that any U.S. entities or persons (including lenders, arrangers or investors) are involved in the proposed joint venture or any other form of the joint exercise in Myanmar, the relevant parties should ensure that any potential partner or counterparty in Myanmar is vetted against the SDN List to maintain compliance with the U.S. Myanmar sanctions regime.

A separate key structuring issue, once a local partner has been selected, is the jurisdiction of incorporation of the joint venture vehicle. While local investment laws may allow an operating license to be issued only to a Myanmar-registered entity, or in the oil and gas arenas a branch office (the "Licensee"), joint venture parties may consider holding the Licensee through an intermediary company organized under the laws of a country other than Myanmar (the "Offshore JVCo"). Whether the joint venture company is an Offshore JVCo or a Myanmar-registered joint venture vehicle (the "Onshore JVCo") is a key structuring issue, as each presents a range of discrete legal and tax implications, which we discuss below.

Joint venture members will need to examine the nuances of evolving Myanmar corporate law when assessing the viability of an Onshore JVCo structure. Of course, the jurisdiction of Myanmar law and Myanmar regulators is to a large degree unavoidable. The business being undertaken by the joint venture vehicle (and the Licensee itself) will in any event be subject to Myanmar laws and regulatory oversight. The question is whether this should also be the case for the joint venture vehicle holding company.

The foreign and local partners may wish to provide for future share transfers under pre-agreed conditions. It is possible to structure call options in Myanmar, but there are different ways of implementation. For example, call options can be included in the articles of incorporation of a company, integrated into the joint venture agreement, or they can be the subject of a separate deed altogether. Myanmar law allows for a number of options in this regard, with different profiles in terms of risk, confidentiality and enforceability. Structures involving call options raise capital gains tax issues for the transferring shareholder where the option is exercised.

The MCA also recognizes the possibility of preference shares and provides that "a company limited by shares may, if so authorized by its articles, issue preference shares which are, or at the option of the company are to be, liable to be redeemed",3 subject to a number of conditions, particularly in relation to the redemption. The standard articles of incorporation used by the authorities in Myanmar, which in practice are adopted by most companies, provide that the share capital of such a company can be divided into different classes of shares.

Any change in the capital structure of a company that has received an investment permit from the MIC is subject to the MIC's approval. In practice, this also applies to any conversion of a shareholder loan into equity capital. Appropriate amendments and notifications will need to be made to the Myanmar Central Bank to ensure that there is no confusion on the part of the relevant authorities as to the transaction effected, so as to manage any later queries should the foreign capital be repatriated in the future.

Using the Offshore JVCo structure may pose issues for local partners. Local companies owned by Myanmar citizens wishing to structure their investment into a Myanmar project through an offshore entity face a number of legal and tax issues. For example, in certain situations permission would be required under the 2012 Foreign Exchange Management Act. One possible structuring consideration would be for these local partners to invest directly in the Licensee, as opposed to the Offshore JVCo, but this approach raises a number of shareholder priority, dividend and voting issues.

In the case of an Offshore JVCo structure, consortium members may of course choose from any number of business friendly jurisdictions in which to incorporate their joint venture vehicle. Other than meeting certain corporate governance basics, it is also important to assess how incorporating the joint venture vehicle in a certain jurisdiction will impact the availability of financing sources. For example, export credit agencies (and even some commercial banks) will only lend to entities that are established in, or doing business in, a specified country or region. This is an important consideration to assess where financing for the Myanmar venture is proposed to be done at the Offshore JVCo level.

The Licensee for most investments in Myanmar will receive a five year tax holiday under the 2012 Foreign Investment Law, in addition to a number of temporary customs duty and conditional income tax exemptions. It is also important to note that Myanmar does not apply a withholding tax on the payment of dividends. Therefore, creating a tax efficient structure is mostly a matter of planning for profit extraction, financing, and for a possible future divestment of all or a portion of the shares in the Offshore JVCo.

Alternative profit extraction measures such as shareholder loans may be considered to protect the Licensee from facing a trapped cash situation. Interest paid on loans, including shareholder loans, is normally tax deductible but the Internal Revenue Department has developed a practice of reassessing certain expenses, which may include interest on loans. Myanmar's withholding tax on the payment of interest to an overseas recipient is 15%, which can be reduced to 10% (or even 8% in the case of interest paid on bank loans to a resident of Singapore) under Myanmar's various double taxation agreements ("DTA"). 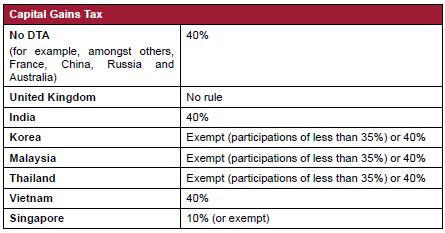 In the coming months foreign investors looking to access the Myanmar market with a local partner will face a host of structuring issues. We have endeavored in this client alert to articulate some of these issues.

Please feel free to contact any member of the Milbank team to discuss any specific questions that you might have.

1 The SDN list is publicly accessible online at: http://www.treasury.gov/resource-center/sanctions/SDNList/ Pages/default.aspx>.