Below we provide you with a brief snapshot of past projects performed by Chinese companies in Israel and future opportunities for Chinese construction companies and financiers in Israel.

Most infrastructure assets are owned by the Israeli government which understands that attention to infrastructure is of fundamental importance to the successful economic growth of Israel. This is demonstrated in efficient government tenders for public-private partnerships as well as for strait government contracting. Additionally, the Israeli government takes a noteworthy involvement in project risk allocation – providing safety nets to concessionaires, such as the assumption of demand risk and other guarantees. Additionally, the government of Israel realizes that foreign companies may be deterred by Israel's geo-political situation, and therefore the Israeli government provides forms of safety nets in the event of war, terror, and other hostile activity. Such safety nets include the government's assumption of the senior debt upon the occurrence of such events.

The level of infrastructure in Israel is insufficient and Israel is still in the process of building and improving its infrastructure, particularly in the area of public transportation, and mainly in the major cities, though also in the electricity delivery system. For many projects, Israel looks for outside help, soliciting international tenders and partnerships, and the coming years will see many opportunities, specifically relating to, highways, railways, energy, off shore gas, and water.

The attached Infrastructure for Growth plan 2017 released by the Israeli Government, shows its multi-year program for infrastructure development which includes a list of 147 infrastructure and energy projects valued at ~$30 million and above totaling approx. ILS 116 billion, whose construction shall begin in the years 2017-2021. The projects presented in the list are projects which are already in progress as well as projects which are budgeted or approved by the government. There are also several projects that have not yet been approved, but have been examined financially, and there is high probability that they will be implemented in the next 5 years. The majority of these projects are transport projects which include several PPP's such as: the Tel Aviv Light Rail Green Line (ILS 20 billion), and the Tel Aviv Light Rail Purple Line (ILS 8.6 billion), and the fast lanes for Road 2 and for Road 20.

The list of projects will provide your clients and affiliates an opportunity to consider the business opportunities Israel's infrastructure and energy sectors afford.

Since Israel's establishment, and until the late 90's, Israel's energy market was characterized by undersupply and imbalance between the different regions of Israel, increasing consumption and virtually no competition. There were no marketable energy sources at hand and Israeli's principal energy sources were imported fossil fuels. Furthermore, electricity generation, transmission and distribution were undertaken by Israel Electricity Company Ltd. ("IEC"), a government-owned monopoly.

Be that as it may, in the last 10 years, the energy market in Israel has changed significantly. Passing the Electricity Sector Law, 5756-1996, introduced structural changes, and transformed the Israeli electricity sector from a concession-based sector to a license-based sector. This framework has allowed for Independent Power Producers ("IPPs"), to own and operate large-scale conventional, solar, wind and pump storage hydroelectricity facilities.

The energy sector in Israel is under developments and provides private companies great opportunities.

For an example of such opportunities for IPP's, please see the Energy chapter in the Israeli Governments Infrastructure for Growth Plan. 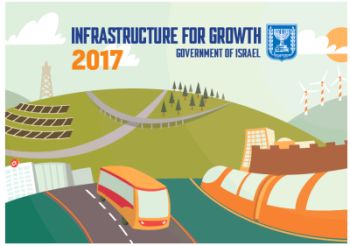 Additionally, in December 2017 the Israeli government and the IEC agreed on a major reform which will lead to the sale of six (6) power plants with a total capacity of approx. 2000 MW to IPP's.

Infrastructure Projects to look out for

NTA Green Line. The line will connect the southern parts of the metropolis (Holon and the outskirts of the city of Rishon LeZion) and the northern ones (Herzliya) with the city of Tel Aviv, providing a solution for future developments through the main business center in Northwest Tel Aviv and Western Herzliya, and enables access to the employment centers in Ramat HaChayal, Tel Aviv University, Holon, Rishon LeZion and Herzliya Pituach. The length of the line is about 39 km, of them approx. 4.5 km underground with around 61 stations.

NTA Purple Line is planned to link the areas of Eastern Tel Aviv to the center of Tel Aviv and will run at ground level. Its total length is expected to be approximately 28 km. At the initial stages, it will pass through Ramat Gan and Tel Aviv.

Chinese infrastructure firm CCECC performed the tunneling works as principal contractor for the concessionaire owned by Ashtrom and Shari Arison's Housing and Construction. The tunnels' purpose is to reduce road congestion in the Haifa area and to provide an alternate route of reaching the eastern and central parts of the city of Haifa. The toll tunnels were built and are operated as a BOT project. They were opened to traffic on 1 December 2010 and represent the 1st major Chinese involvement in Israeli infrastructure projects.

Danya Cebus and China Civil Engineering Construction Corp ("CCECC") performed the work on a 4-6 km twin-bore tunnel that will carry the new 'Akko - Karmi'el rail line under the Gilon Mountain. Work was performed under a US$276m contract awarded to Danya Cebus and CCECC in 2011 by Israel National Roads Company Ltd, which is also responsible for rail projects.

China Civil Engineering Construction Corporation Ltd. (CCECC) and Pan Mediterranean Engineering Company (PMEC) a unit of China Harbor Engineering Company recently submitted bids on the highway 16 project that will be built on a public-private partnership (PPP) basis with the winning bid planning, financing, designing, building, operating and maintaining the highway on a 25 year concession. The new highway will enter Jerusalem through its southwestern neighborhoods, and will ease congestion on the existing Western entrance to Jerusalem

Chinese Company Changchun Railway Vehicles Co., Ltd. ("CNR") won the tender and is currently performing the project for the provision of the Rolling Stock Vehicles for the Tel Aviv Red Line, the 1st line of the Tel Aviv Light Rail Project.

The Chinese partnership of CRTG and EEB as the winner of the Red Line Systems tender. The CRTG-EEB group will be responsible for the construction of the electrical and communications systems and for the installation of the light rail tracks; the German company Deutsche Bahn will manage the integration of all the systems in the project. The Systems contract is considered one of the most prestigious projects on the Red Line and the works are valued at approx. 2.5 billion NIS.

The two Chinese companies CREGC and CRRC recently submitted responses to the PQ for the Jerusalem Green line light rail transit project progressed on a public-private partnership basis with the winning bid planning, designing, financing, building, operating and maintaining the light rail transit on a 25 year concession. The Green Line will serve around 160,000 of the city's daily passengers ,and will connect some of its most important hubs, and together with the red line, will serve about 250K people per day. The Green line is estimates to be one of the largest projects across Europe and the Middle East.

In 2012 the governments of Israel and China signed cooperation agreements to build the Eilat railway and other future projects, including the inland canal port north of Eilat. The main project on the agenda is the construction of a cargo rail line that will link Israel's Mediterranean ports in Ashdod and Haifa with the Eilat Port. There are also plans to extend the line to Jordan's Aqaba Port. Israel has declared the Eilat railway a national priority project, because of its strategic and policy importance, and the Chinese Government also consider the project to be important, as it fits in with China's global strategy to strengthen critical trade routes. The 180-kilometer line will run through the Arava Valley and Nahal Zinn and the estimated cost of the line is at least NIS 25 billion. The Israeli government is still considering the method to administer and finance this project, and is weighing up between traditional BOT Tender or awarding construction of the project to Chinese companies, because of their rapid work, and is therefore considering a government-to-government agreement to bypass the Tenders Law in awarding the franchise, however the former option appears to be the more likely form of tender that will be implemented.

China Harbor Engineering Company unit PMEC is building the Ashdod Port for approx. NIS 3.35 billion after winning a tender issued by Israel Ports Company. The works include construction of a working quay, extension of the existing main breakwater by 600 meters, constructing 1,500 meters of secondary breakwaters, constructing quays, with a main quay of 800 meters in length and a 17.3 meter depth of water, constructing storage and operating areas, and dredging.

Shanghai International Port Group has been awarded the government tender to operate and maintain the new port in Haifa for 25 years. The new Haifa Port is expected to commence operations in 2021. The two new ports are key projects in Israel that are expected to address the needs of the economy and promote vital competition in the ports sector for the benefit of the public, in keeping with the model in place at most ports around the world. Israel Port Authorities award of these projects to two Chinese companies is a vote of confidence in Chinese construction companies in Israel.

The information provided in this document cannot cover all planned projects. It is aimed at highlighting some of the bigger projects as well as underlining the potential of the Israeli market for Chinese construction and energy companies.

We will be happy to keep you abreast of opportunities which may be relevant to your clients as these present themselves.