Ghana: Ghana Decided: Out With The Old, In With The New Patriotic Party

Following a call to concede defeat by incumbent President John Dramani Mahama of the National Democratic Congress (NDC) to Nana Addo Dankwa Akufo-Addo of the New Patriotic Party (NPP) late on Friday evening (9 December 2016), the Electoral Commission of Ghana (EC) declared the opposition candidate the winner of the 7 December 2016 presidential election. At the time of the announcement, results were still yet to come in from some constituencies but the margin of victory in favour of Akufo-Addo was so great that the EC could declare knowing that the unknown results would have no bearing on the overall outcome. So now that Ghana has a new president-in-waiting, what lessons can be distilled from the whole electoral process and what will be the priorities for the government in the wings?

Briefing the media in the early hours of the morning on Thursday 8 December 2016, the NPP declared that its flag-bearer had won the polls. The party called on incumbent President John Dramani Mahama to concede defeat. Simultaneously, the NDC made a counterclaim, also during a press briefing, to say that in fact, its flag-bearer was in a "comfortable lead".

The EC held three press conferences the day after polling day but didn't declare the results because of complaints of over-voting in some constituencies and the alleged lack of cooperation on the part of political party agents at the national collation center. The delay in the announcement created tension in the country because both the NDC and NPP claimed to have won the race.

However, the tension somewhat dissipated when just shortly before 9pm on Friday, 9th December, 2016, the final declaration of the presidential results was made by the EC chairperson, Ms. Charlotte Osei. Akufo-Addo won the race garnering 53.85% of votes compared with Mahama's 44.40%. As at the time of announcement, results of 4 out of overall 275 constituencies were outstanding for various reasons.

Results of Election by Region 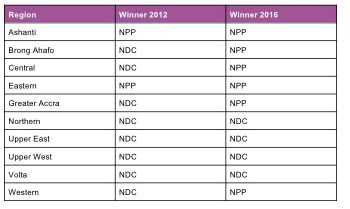 One of the characterising features of this election appears to have been voter apathy. In terms of total votes, there were 465,000 less than in 2012. This is despite there being an increase in the number of registered voters of more than 1.5 million. Overall, turnout fell from 79.4% in 2012 to 68.6% in 2016 There are a number of potential factors for this potential apathy. One is that many people were under the impression that the candidate they support would comfortably win the election and so they believed that there was no need for them to go through the long voting process. The potential for this was flagged up early on in the election campaign which led to a big push by the parties to ensure their supporters got out to vote. Another potential reason for the low turnout could have been concerns over security. A Songhai Advisory study carried out before the election revealed that 79% of respondents expressed concern about security in the run-up to the polls. Those kinds of sentiments and concerns often what lead voters to consider their personal safety above that of their civic duty and make the decision to not vote at all.

This overall lower turnout was particularly damaging to the outgoing president. He attained roughly 861,000 votes less than he did in 2012. Although the NDC gained over 82% of the vote in its 'World Bank' stronghold of the Volta Region, voter turnout was as low as 60% compared to the national average of 68% (final figures are yet to come out). Social media platforms are vibrantly discussing the situation, with one Songhai consultant based in the Volta Region concluding that there are 'a plethora of reasons' as to why Voltarians did not vote en masse: "The people of southern Volta abstained because they felt left out in terms of developmental projects and job opportunities. Due to the vigilance of the NPP dubbed 'Operation Tiger Eye', Ghanaians resident in Togo didn't feel safe enough to return. The opulence of the political leadership annoyed some too".

The Songhai Advisory pre-election study showed that 58% of Ghanaian voters would be casting its ballot based on the policy objectives of the candidates as opposed to taking into account issues such as ethnicity - indeed, none of our respondents said that this was important when casting their vote. Though the survey findings were in no way representative of the whole nation, they do point towards a maturing electorate which is moving away from personality politics. This could have much to do with the rapidly-developing presence of social media1 and Ghana's vibrant civil society. The main group involved in social media activity was Ghana Decides, an initiative of Blogging Ghana. The group attracted over 56,000 followers across its social media platforms and created the #GhanaDecides hashtag which was the most-used hashtag relation to the elections.

There was a significant number of spoiled ballots, amounting to 166,248 or 1.5% of votes cast. There have been repeated calls from various policy think tanks, NGOs and other actors for the EC and the National Commission on Civic Education (NCCE) to improve voter education to reduce this phenomenon in Ghanaian politics.

Despite the successful poll, there were some pockets of violence recorded at Odododiodo, Ankaase, Suhum, Chereponi, Hohoe among others but the security agencies were quick to quell those skirmishes. On Sunday 11 December 2016, supporters of the NPP and NDC clashed at Ekumfi-Esuehyia in the Central Region and as result, three people were injured. Post-election clashes have also been recorded in some parts of the country, largely attacks on NDC supporters by NPP loyalists. The NPP has condemned those attacks and called on police to bring culprits to book, although some media houses such as JoyFM have chastised the party for not lambasting the culprits sooner.

The amended Presidential (Transition) Act of 2012 (Act 845) states that a transition team should be appointed within 24 hours of the declaration of results by the EC. The team was announced on Saturday, 10 December and inaugurated the following day. This will be the first real test of the efficiency of the Act which came into being after the protracted election petition case led to several administrative delays. The aim of the Act is to facilitate a smooth transition process and also to allow for a comprehensive stock-take of government assets. At its inauguration, the president-elect reminded all members of the Transition Team that "it is important that all the decisions to be taken between now and [7th January] would be guided in the best interest of the nation".

From our observations, there are some common threads which bind together the members of the team, including the facts a number of them served in the Kuffuor government and have economic policy or strong private sector backgrounds. This reflects the major campaign promise of the NPP to restore the struggling economy. Yaw Osafo Marfo is a long-standing NPP figure with expertise in the economy having held the post of Minister of Finance and Economic Planning in the Kuffuor administration as well as posts with the World Bank and the African Development Bank. Ken Ofori-Atta is a key NPP supporter and financier. He is the CEO of Databank and is also involved in banking in Liberia and Gambia. Gloria Akuffo held various ministerial posts under Kuffuor and was also the lead counsel on the NPP's case challenging the election results in 2012/13. Hajia Alima Mahama also held a number of ministerial posts between 2001 - 2008.

The NPP won this election largely based on the policy objectives it presented to the electorates. In the party's 2016 manifesto dubbed, "Change: An Agenda for Jobs", the party promised to build one factory in each district to create jobs especially for the teeming unemployed youth. Other popular promises of the NPP were to construct one dam in each of the villages in the three northern regions to boost agricultural production. Again, the NPP has promised to invest US$1 million into infrastructural development in each of the 275 constituencies annually.

In transforming the economy, a government led by the NPP plans to the grow the economy by shifting from taxation to production. Corporate taxes will be reduced from current levels of 25% to 20%, 17.5% VAT on financial services, internal flights and imported medicines will be abolished and 5% VAT on real estate sales will be scrapped.

In reducing the canker of corruption, the NPP has promised to establish the office of an independent prosecutor, although Akufo-Addo has been explicit in saying that his administration will have no interest in pursuing a 'witch hunt' against members of the NDC2. It is unclear whether the new government will heed the various calls from civil society to separate the Attorney General's office from that of the Minister of Justice, which is the current arrangement.

Ghana held its seventh consecutive elections under its Fourth Republic, which were widely considered to have been free, fair and peaceful. From all indications, the profile of the Ghanaian voter is changing: a penetrating social media and a vibrant civil society have helped to cement the notion of a maturing electorate. The NPP showed itself to be extremely vigilant in its parallel tabulation of results alongside the EC, which has set an extremely important precedent in terms of the oversight function that parties can play in order to deter possible malfeasance by the EC. The EC will no doubt be scrutinised, to ascertain what went wrong with the digital transmission of results, an issue that has been blamed for some of the confusion and delays in the declaration of results. The NPP came in to the election still harbouring some concerns about the legitimacy of the voter's register so it is likely that it will address that issue at some point during its time in power. Indeed, the party's campaign manager has already raised the issue despite the party's victory.

With a promise to restore macroeconomic stability, the NPP appealed to the bread and butter issues which were at the core of the frustrations of a number of Ghanaians at a time of a fast-depreciating currency and a rapidly-rising cost of living. As such, the new administration under Akufo-Addo will be under pressure to deliver on its promises or face the unwanted consequences that come with an increasingly discerning voter population- the red card.