by Cayman Finance (Grand Cayman)
Cayman Finance
Your LinkedIn Connections
with the authors
To print this article, all you need is to be registered or login on Mondaq.com.

The Cayman Islands Tax Neutral regime is a globally responsible tax model that is simple and transparent and efficiently supports the global free flow of investment capital and financing without posing tax harm to other countries' tax bases.

Tax conflict arises when the two countries involved in the cross-border activities both have domestic tax laws and rules that would result in the same income or profit being taxed twice, once in each country. This tax conflict is generally referred to as "Double Taxation" and is considered by the United Nations, OECD and others as a significant barrier to beneficial cross-border economic activity.

The main objective of tax treaties is to seek to alleviate double taxation by allocating taxing rights between the two countries. In addition, tax treaties may also contain provisions for tax conflict mediation and sharing of tax information to address tax evasion and aggressive tax avoidance.
Almost all EU members pursue the benefits of easing of the double taxation burden through the use of Double Taxation Treaties. Some EU Member States have in excess of 70 double taxation agreements or treaties.

Concerns Regarding the Abuse of Double Taxation Treaties and Treaty Shopping

Double Taxation Treaties are by nature complex and less transparent, and therefore sometimes pose a risk of abuse for tax evasion or aggressive tax avoidance.

According to the European Commission, "some companies avoid taxes by 'treaty shopping' i.e. by setting up artificial structures to gain access to the most beneficial tax treatment under various tax agreements with other Member States or third countries." This practice is widespread enough that the EU has had to take measures to combat the abuse.

An IMF Working Paper ['The Cost and Benefits of Tax Treaties with Investment Hubs: Findings from Sub-Saharan Africa'] did "not find that the tax treaties increase Foreign Direct Investment (FDI) in the treaty partner countries. The study does indicate however that there are revenue losses in source countries after they have concluded a treaty with Mauritius and with investment hubs more generally."

These could indicate that concluding a tax treaty gives rise to rerouting of investment and income flows, and potentially increases incentives for base erosion and profit shifting, rather than increasing the overall investments made.

Cayman pursues easing of the double tax burden through a policy of Tax Neutrality, which means investors in Cayman are still subject to their home jurisdiction's tax requirements, but the Cayman Islands does not add an additional layer of taxation on to the proceeds from their investments.

This straightforward policy allows Cayman to achieve the same objective as countries with double tax treaties but with similar or stronger safeguards against abuse.

"The use of collective investment funds domiciled in locations such as...the Cayman Islands is legal, common and widely considered best practice portfolio management," the manager said. "The collective investment fund provides a tax-neutral jurisdiction to ensure its collective income does not pay a second layer of foreign tax in relation to income on which all applicable taxes have already been paid at source." [Managers of New Zealand's €21.7bn NZ Super Fund]

Cross-border economic transactions involving the Tax Neutral jurisdiction of the Cayman Islands do not require tax treaties as there is no tax conflict and no risk of double taxation. In addition, cross-border transactions between the Cayman Islands and other countries do not require tax treaties for the purpose of administrative assistance (such as the ability to exchange tax information) because the Cayman Islands has in place numerous bilateral tax information exchange agreements (TIEAs) and is covered by the Multilateral Convention on Mutual Administrative Assistance in Tax Matters through extension by the United Kingdom.

Tax Neutral jurisdictions like Cayman support a level of transparency that arguably make them better at combatting tax evasion and aggressive tax avoidance than those that rely on the often-opaque system of Double Taxation Treaties.

The Cayman Islands is a transparent, cooperative jurisdiction that already meets or exceeds the full range of globally-accepted standards for transparency and cross-border cooperation with law enforcement and tax authorities. The OECD's Global Forum in 2017 assessed Cayman to be "largely compliant" with the international standard for transparency and exchange of information, the same rating given Germany, Canada and Australia.

In May 2019, senior FBI official Steven M. D'Antuono testified before a Senate committee that the Cayman Islands provides "immense value" in combating financial crime, noting beneficial ownership information is able to be provided to law enforcement within 24 hours of a request to support investigations by the FBI and other law enforcement agencies.

Cayman is not a tax haven and meets none of the accepted definitions of a 'tax haven.' Unlike countries with Double Taxation Treaties or other domestic tax incentives, Cayman does not have different headline versus effective tax rates.

Cayman meets the highest global transparency standards, in part, through the automatic exchange of tax data with international tax authorities.

No Base-Shifting Mechanism in Cayman

Base-shifting to evade or avoid taxes requires a legal mechanism – usually in the form of terms of a double tax treaty. The Cayman Islands operates a Tax Neutral regime and has no Double Taxation Treaties; therefore, it has no legal mechanism to allow base-shifting.

Why Use Cayman If Not for Tax?

Global investors are increasingly engaged in a flight to quality — relocating their resources based on sophisticated assessments of which financial centres offer the best combination of:

Very few international financial centres meet those qualifications – and none do it as well as the Cayman Islands.

"Legitimate reasons for using an intermediate jurisdiction may include, but are not limited to... parties to a joint venture or partnership may be from different jurisdictions and want neutrality in selecting the jurisdiction for their venture (including equal legal and tax treatment) ..." [World Bank Group]

In Summary, the Cayman Islands Tax Neutrality regime is a globally responsible tax model that is simple and transparent and efficiently supports the global free flow of investment capital and financing without posing tax harm to other countries' tax bases. The Cayman Islands Tax Neutral regime meets the criteria of an alternative tax policy model that is allowed under the OECD Model Tax Convention. 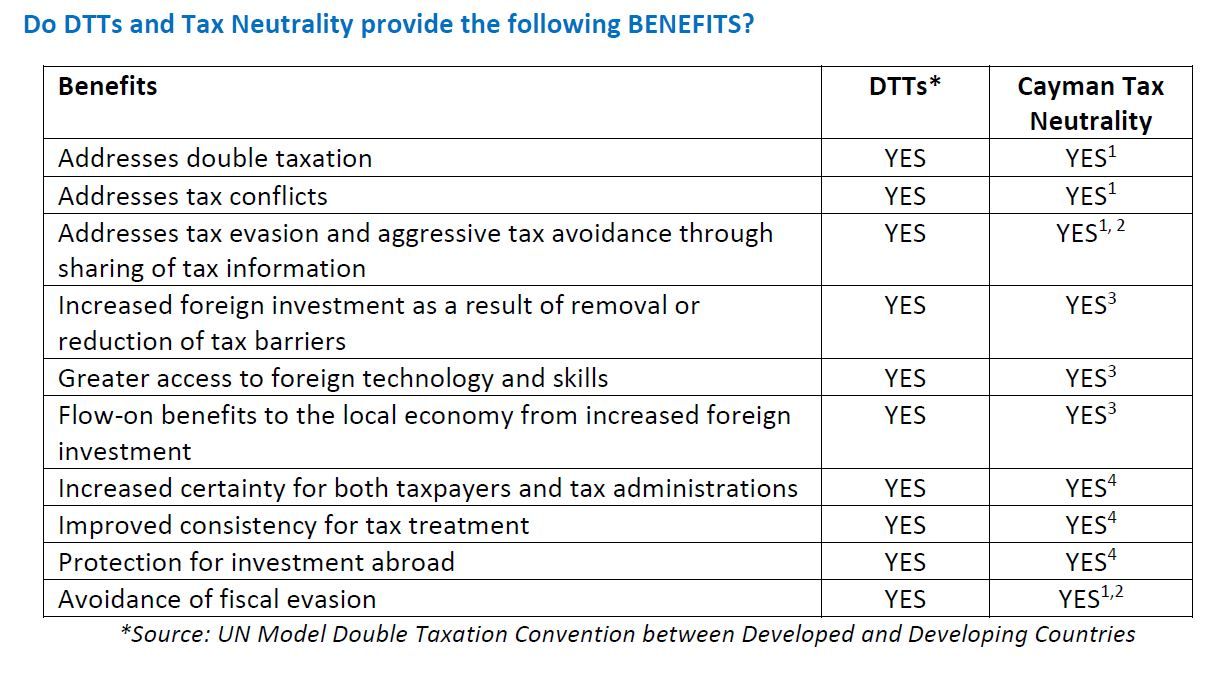 1 Two countries "that consider entering into a tax treaty should evaluate the extent to which the risk of double taxation actually exists in cross-border situations." The OECD Model Tax Convention goes on to indicate that where a country levies no or low income taxes and the other country is satisfied there are no risks of double taxation, a tax treaty would not be necessary. "In the absence of any actual risk of double taxation, these administrative provisions would not, by themselves, provide a sufficient tax policy basis for the existence of a tax treaty because such administrative assistance could be secured through more targeted alternative agreements, such as the conclusion of a tax information exchange agreement [TIEA] or the participation in the Multilateral Convention on Mutual Administrative Assistance in Tax Matters." [OECD Model Tax Convention on Income and Capital, 2017]

2 Cayman was among the first countries to undertake automatic exchange of tax information with relevant authorities in other countries under the OECD's Common Reporting Standard (CRS). With other countries adopting CRS, Cayman now shares take information with over 100 other governments –including the UK and all EU Member Countries – which essentially assists them in the collection of their own taxes, regardless of what their unique tax laws are. [OECD AEOI: Status of Commitments, Aug. 2019]

3 There is no tax conflict and no risk of double taxation in cross-border economic transactions involving the tax neutral jurisdiction of the Cayman Islands. Therefore, as with DTTs, the elimination of double taxation barriers results in increased foreign investment into developed and developing countries, greater access to foreign technology and skills and flow-on benefits to these countries' local economies from the increased foreign investment.

4 Cayman Islands tax neutrality is simple, transparent, and does not affect the domestic taxing rights of other countries. The result is increased certainty for both taxpayers and tax administrations in cross-border transactions with Cayman as well as consistency for tax treatment and certainty for foreign investment.

6 Cayman cannot pose risk of double non-taxation because (i) it does not have tax treaties and (ii) Cayman's stated tax rate is exactly the same as its applied tax rate. Double non taxation is generally caused by the use of provisions in a tax treaty to shift the tax base from one country to a second country, and domestic tax policies in the second country (eg. Exemptions, exceptions, tax rulings, credits, etc.) that dramatically reduce the actual tax collected and retained to an amount substantially less than the stated tax rate the second country used to justify the shift of tax base under the treaty. [OECD Harmful Tax Practices – Peer Review Results; Inclusive Framework on BEPS – Action 5, Jul 2019]

(Technically, Cayman has signed a double taxation treaty with the UK, but it is merely the form in which the UK preferred to execute its tax information exchange agreement with Cayman. The agreement provides no tax benefits to Cayman as Cayman does not have any taxes covered by the agreement.)