by Cayman Finance
Cayman Finance
Your LinkedIn Connections
with the authors
To print this article, all you need is to be registered or login on Mondaq.com.

In 1976 a breaking point for the insurance industry was reached. After a time of political movement and economic upheaval, liability insurance pay-outs in the US had reached an unsustainable rate, seeing several major insurers withdrawing completely from the market. Needing to secure adequate coverage for their physicians, Harvard Medical Institutions took matters into their own hands and formed the first offshore captive insurance company in Cayman: Controlled Risk Insurance Company Ltd (CRICO).

The word 'captive' refers to the relationship between the insurance company and its owner. Companies use captive insurance as a risk management and cost reduction tool; they are effectively a form of self-insurance, where an insurance company is created and owned by one or more companies, providing coverage for themselves, and taking responsibility for insuring their own risks.

The benefits? If there are no claims, they keep the profit; they avoid the expensive overheads of using a traditional commercial insurance company which sets prices based on broad industry averages; they use their company intelligence to customise their insurance programmes accordingly and avoid paying for risks that don't apply to them; the list goes on.

Over the past 40 years, Cayman has cemented its reputation as a world leader in the captive market. This reputation is built on robust regulation, a sophisticated and comprehensive legal system and the highest quality of professionalism and experience from its service providers, all of which are supported and promoted by the Insurance Manager's Association of Cayman (IMAC).

Today, the Cayman Islands is home to over 700 captive insurance companies and is the second-largest captive domicile in the world after Bermuda.

The recent release of Q3 2017 statistics from the Cayman Islands Monetary Authority (CIMA) showed Cayman's captive industry generated annual insurance premiums of US$12.4 billion, with assets under management of nearly US$62bn - enormous figures for an industry that employs fewer than 300 people in Cayman.

The industry's largest line of business is in the healthcare space - with 32% of licenses being for 'medical malpractice liability' and a further 22% in 'accident and health' bringing the total AUM in the healthcare space to nearly $14bn. Ninety per cent of the captive business comes from North America, but the near 30 insurance management companies on island cover clients from around the globe, making it a truly global insurance centre. IMAC's own studies have calculated the captive industry's contribution to the local Cayman economy to be around $85m annually. This amount is broken into three main categories: government fees (insurance licence & registry office), $11m; service fees to insurance managers, lawyers, accountants etc, $62m; transport, hotels, restaurants and leisure, $12m. This is understandable when you consider the constant flow of the 700+ insurance company owners visiting the Cayman Islands to hold board of director meetings and to meet with the Insurance Supervision Division at CIMA.

Every year, the Cayman Captive Forum alone attracts over 1,400 captive insurance professionals to the island. In 2017 it celebrated its 25th anniversary, and goes from strength to strength each year in bringing people together to network, learn and discuss the issues most pressing to the captive insurance industry. In addition to helping Cayman's general economy and promoting Cayman as a quality domicile for captive insurance companies, IMAC - thus the captive industry of Cayman - has a number of specific charitable projects. One of these is the IMAC Education and Scholarship Foundation which was started in 1994. Since then it has raised US$3.4m which has been used to assist 42 young Caymanians attending university overseas. For more about Cayman's captive industry, you can visit IMAC's website at www.caymancaptive.ky 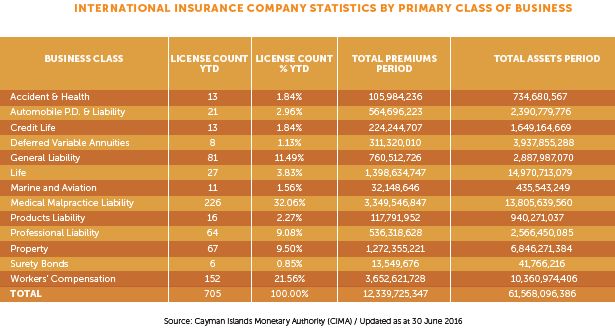 ARTICLE TAGS
Cayman Islands Insurance Insurance Laws and Products
POPULAR ARTICLES ON: Insurance from Cayman Islands
Conyers Coverage – Cayman Islands – Issue 4
Conyers
A very warm welcome to our fourth issue of Conyers Coverage. This issue focuses on the evolution of the Cayman Islands insurance industry.
Draft Insurance Broker Regulations: What Could Change?
BSA Ahmad Bin Hezeem & Associates LLP
The insurance brokerage in the UAE, like the rest of the insurance sector, is regulated by the UAE Insurance Authority. This has merged with the UAE Central Bank, which is now the unified regulator...
2009 Motor Insurance Directive: An Evaluation Of Current Proposals For Amendment
Harris Kyriakides
The 2009 Motor Insurance Directive is paramount for materialising the fundamental right of freedom of movement for European citizens across the EU.
Justice In The Insurance Sector
Harris Kyriakides
A recent article of our Insurance and Personal Injury team with title: "Justice in the Insurance sector" has been published in the IN Business Magazine.
The Legal Services Act, 2020 And The Insurance Industry
Conyers
The Legal Services Act, 2020 (the "LSA") was gazetted on 7 January 2021 and is expected to come into force once the Regulations have been finalised and a commencement order issued before the end of February this year.
Enforcing Foreign Court Judgments In The United Arab Emirates
Kennedys
One of the fundamental objectives of litigation with an international flavour is to obtain a favourable judgment that is not only valid and enforceable in the country in which it is given but also other countries.
FREE News Alerts
Sign Up for our free News Alerts - All the latest articles on your chosen topics condensed into a free bi-weekly email.
Register For News Alerts
Article Tags
Cayman Islands Insurance Insurance Laws and Products
Related Articles
Conyers Coverage – Cayman Islands – Issue 4 Conyers
To BII Or Not To BII – A Cayman Islands Perspective Conyers
The Legal Services Act, 2020 And The Insurance Industry Conyers
Q & A With Nate Gemmiti Chairperson Of CIRCA Conyers
Weathering Insurance Market Storms With Captives Ocorian
Mondaq Webinars
Economic And Legal Issues In Data Privacy And Data Breach “Class Actions”
Cornerstone Research
Webinar London UK
Arbitration in India and Singapore: Practitioners’ Views
Advani & Co
Webinar Mumbai India
More Webinars
Comparative Guides
Alternative Investment Funds
Enforcement of Foreign Judgments
FinTech
International Arbitration
Private Equity
Mondaq Advice Centres
Global
Trademarks in SAARC Countries
Global
Investment Immigration
Offshore
Asset Management & Investment Funds
More MACs
Upcoming Events
Mondaq Social Media