The essential element of a structured finance transaction is the conversion of certain assets into marketable securities. Typically a Cayman Islands' special purpose vehicle ("SPV") will be set up to purchase an asset (or pool of assets). The SPV funds the purchase of such asset by the issue of notes or preference shares ("Securities"). The asset (or pool of assets) acquired by the SPV will generate a cash flow which is used to pay interest on the Securities. The payment obligations of the SPV under the Securities will be secured by the purchased assets and the accompany cash flow. The arranger will also use part of the proceeds of the issue of the Securities to pay all fees and expenses on behalf of the SPV and the SPV will receive a small fee in order to establish it has generated a corporate benefit for itself. Ultimately, the redemption proceeds of the underlying assets (or occasionally the sale proceeds) are used by the SPV to redeem the Securities upon maturity. 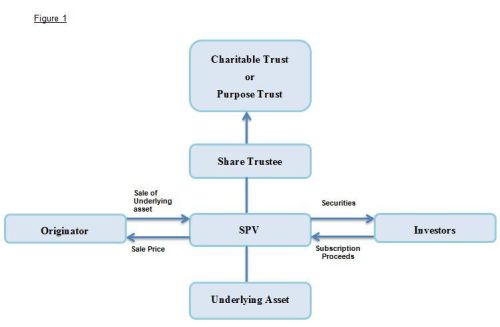 In asset finance transactions, a typical structure involves a SPV being set-up as the owner of the asset which may be aircraft, vessels or machinery. The SPV will fund its purchase of the asset by obtaining loans from commercial banks or funding supported by export credit agencies and will lease the asset to an operator (eg airline or leasing company). The lease rental payments received by the SPV will be utilised to make principal and interest payments on the loans. As security for the loans, the SPV will grant mortgages or charges over the acquired asset and any related contractual rights (eg insurance policies or warranty agreements for the assets) in favour of the financiers. To enhance the financier's position, share security will often be granted by the shareholder(s) of the SPV. The SPV may be structured as either "off-balance sheet" as described below, or "on-balance sheet" where the SPV is set up as a subsidiary of the operator or other parties to the transaction. 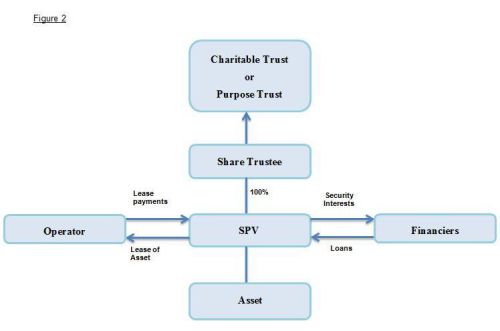 Setting up the Off-balance Sheet Structure

The SPV will typically be an 'orphan' company to ensure the assets of the SPV will not appear on the balance sheet of any party to the transaction. This is accomplished by issuing the shares in the SPV to a Cayman Islands' trust company to be held in its capacity as trustee of a Cayman Islands' trust (the "Share Trustee"). The trust is typically a charitable or purpose trust created pursuant to a declaration of trust executed by the Share Trustee. The assets of the trust (ie the right to receive the ultimate surplus on the winding-up of the SPV by way of distribution from the SPV) will be held by the Share Trustee on behalf of the charities in the case of a charitable trust, or the beneficiaries or specified purpose in the case of a purpose trust.

The Share Trustee administers the trust and holds the legal title to the trust assets (principally the issued share capital of the SPV). Typical powers or discretions included in a Cayman Islands' SPV charitable or purpose trust would restrict the Share Trustee from disposing of shares in the SPV or winding up the SPV for the duration of the transaction.

As an alternative to using a charitable trust, a statutory purpose trust can be used (known as a 'STAR trust'). This can be for pure purposes or a mix of purposes and beneficiaries. The rights of beneficiaries under common law trusts are given to an 'enforcer' by statute and an interested counterparty to the transaction may act as the enforcer of the trust, or a third party enforcer, unrelated to the transaction could be approved.

Upon the expiration of the transaction, the trust will terminate and the trust property (namely the net asset value of the SPV, which will be the issued share capital and any transaction fees earned by the SPV net of its expenses) will be distributed by the Share Trustee to the beneficiaries.

In a typical transaction, the SPV will enter into an administration or management agreement with the trust company to provide administrative services for the SPV. This agreement will set out the services to be provided by the administrator to the SPV, which usually includes the provision of the directors and officers (such as a secretary) of the SPV and the services of the Share Trustee to the charitable or purpose trust.

In certain circumstances, the agent and trustee of the Securities issued by the SPV in structured finance transaction (the "Note Trustee") or the agent and trustee under the loan in an asset finance transaction (the "Security Trustee") may be a party to the administration agreement and will take covenants from the administrator in respect of the business and management of the SPV, which the Note Trustee or Security Trustee can enforce directly. The administration agreement will provide that the administrator will carry out all necessary day-to-day administration of the SPV to ensure that it complies with all applicable rules and regulations of the Cayman Islands. The Share Trustee will be required (in its capacity as the registered holder of the issued shares of the SPV) to give covenants to the Note Trustee or the Security Trustee to ensure the trust conforms to the transaction, for example, that the Share Trustee does not give any directions to the directors of the SPV (other than as required to carry out the day-to-day administration referred to above) or to take any other steps to increase the issued share capital of the SPV, sell, transfer or create a security interest over any of the issued shares in the capital of the SPV (except as may be contemplated by the relevant transaction documents), or amend or vary in any way whatsoever the provisions of the memorandum of association and articles of association of the SPV, without first obtaining the consent in writing of the Note Trustee or the Security Trustee.

The memorandum of association of the SPV may be drafted to restrict the business of the SPV to the activities specifically contemplated by the transaction documents.

Parties to any transaction documentation must be aware that any attempt to assert too much control over the SPV risks undermining the trust structure. The result may be that the SPV is regarded as a nominee or agent of a party to the transaction or as a controlled foreign company of a party to the transaction, under the laws of a foreign jurisdiction. The extent of any involvement should therefore be the subject of legal and tax advice in the relevant jurisdiction so as to ensure that the position of the relevant parties is not prejudiced by the proposed structure.

Advantages of using the Cayman Islands

At the same time, Cayman Islands' commercial legislation benefits from being much less cumbersome in many of the areas that have caused considerable difficulty and uncertainty under the corresponding English statutes, for example:

It is key in structured finance transactions and asset finance transactions that there is no tax leakage. The size of these transactions means that a small number of basis points of tax can amount to a large tax charge. Tax leakage can arise because there may be corporation tax in the jurisdiction in which an SPV is incorporated or where it is deemed to be doing business. Withholding taxes may be payable on payments made or received by an SPV.

In the Cayman Islands, there are no corporation taxes on any company carrying out either domestic business or offshore business. The use of Cayman Islands' administrators means that SPVs are centrally managed and controlled in the Cayman Islands, which helps onshore tax counsel gain comfort that the SPV will not be taxable in the relevant onshore jurisdiction, except in certain cases where the SPV is designed to be tax resident in a particular taxing jurisdiction.

Additionally, in relation to payments made by an SPV there is no tax withheld by the Cayman Islands' Government on any payment of principal or interest. This is of great benefit in simplifying the basis and structure of any transaction.

The lack of direct taxes in Cayman is only one of the advantages of the Cayman Islands SPV. Others include:

An SPV is usually incorporated as an exempted company under the Companies Law. As such, the SPV has a number of special features:

The initial filing requirements are straightforward:

For Cayman entities, the general criteria applied by rating agencies to ensure sufficient protection against both voluntary and involuntary insolvency risks would be:

All of the above requirements can be easily satisfied under Cayman Islands law using a SPV.

In most off-balance sheet financings, security is granted over the underlying asset by the SPV in favour of the Note Trustee or Security Trustee.

In general, no filings are required in respect of mortgages, charges or security interests under the laws of the Cayman Islands in order to ensure the validity or enforceability thereof or to regulate their ranking in point of priority. However, each company is required to maintain its own register of mortgages and charges and is under a statutory obligation to register details of any security granted by it over its assets in such register.

The priority of competing security under Cayman Islands law depends upon the application of the conflict of law rules but, in general terms, these look to the law governing the security agreement and the law of any agreement creating the asset over which the security has been taken or the law of the place where the asset is situated.

Insolvency in the Cayman Islands: A Creditor Friendly Jurisdiction

Cayman Islands' insolvency law is recognised as being creditor-friendly. Some of the factors contributing to this are:

Cayman Islands Steps For Setting Up An Off-Balance Sheet Structure

The first board meeting at which the directors are appointed and the shares issued to the share trustee is usually held shortly after the SPV is incorporated.

The declaration of trust is usually signed several days before the transaction signing date in conjunction and must be signed before any transaction documents are signed, to ensure the SPV is an orphan when the transaction is entered into. The administration agreement can be signed on or before the closing date.