A valid trademark registration is also a defence to a trademark infringement action.

However, even though the Travelway marks were declared invalid, the Federal Court refused to grant Wenger monetary relief because Travelway's marks were not declared invalid ab initio. In other words, because the marks were registered during the time when passing off and infringement occurred, Travelway was not liable for damages – the registrations protected Travelway's use of the confusing marks.

Wenger and its licensees have been using registered trademarks in Canada consisting of a cross in a rounded quadrilateral and surrounded by an inlaid border in association with luggage since as early as 2003. In 2009, Travelway began using its trademarks, the Travelway Cross Design and the Travelway Triangle Mark, in association with luggage. These trademarks were subsequently registered. In 2012, Travelway began using unregistered modified versions of its trademarks, the Disappearing S Mark and the Missing S Mark, thereby increasing the resemblance of its marks with the Wenger Cross Mark. 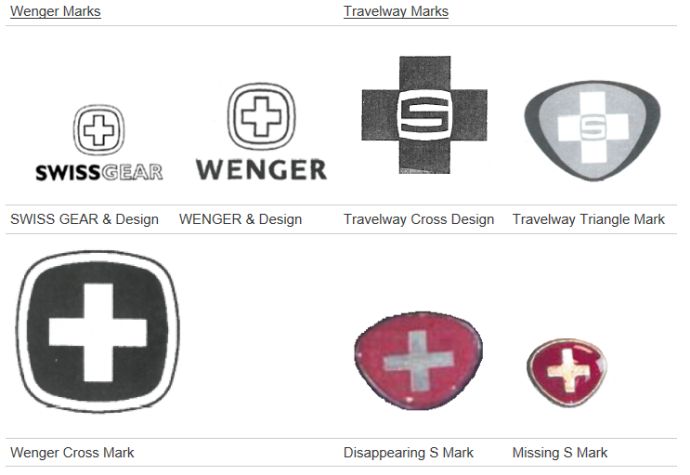 In an effort to protect its trademarks, Wenger instituted proceedings for trademark infringement against Travelway (Wenger S.A. v Travel Way Group International Inc, 2016 FC 347); however Wenger was unsuccessful largely because it was unable to establish a likelihood of confusion with the Travelway marks.

In 2017, the Federal Court of Appeal overturned this decision and concluded the Disappearing S Mark and the Missing S Mark were not separate trademarks, but rather permissible variants of the Travelway Triangle Mark. As there was a strong resemblance and likelihood of confusion between the Travelway and Wenger marks, the Federal Court of Appeal concluded that Travelway's registered trademarks infringed and passed off on Wenger's registered trademarks. Rather than ordering expungement of Travelway's marks, the issue was referred back to the lower court for adjudication together with the awarding of damages.

Federal Court ruled in favor of expungement and against awarding damages

It was implicit in the Federal Court of Appeal's decision that the Travelway marks were invalid despite no explicit conclusion, as it found infringement and passing off has been established. Therefore, the Federal Court expunged Travelway's marks on the grounds of non-distinctiveness and non-entitlement. The parties disagreed as to whether other invalidity grounds, namely non-registrability, were applicable as well; however the Federal Court declined to resolve this disagreement as the parties had agreed on two accepted grounds of invalidity.

Having proven infringement and passing off, Wenger believed it was entitled to financial compensation pursuant to section 53.2 of the Trademarks Act. Nominal damages have been awarded even in cases where the plaintiff could not prove a loss or in cases involving innocent passing off. Moreover, given that the Travelway marks were deemed similar to the Wenger marks from the time Travelway's wares first entered the marketplace in 2009, Wenger argued the accounting period should begin from the date of first use of the Travelway marks.

The court noted Travelway immediately ceased all sales on the date of the Federal Court of Appeal's judgement. Accordingly, no damages or profits occurred after that date. The only issue to be determined was whether Wenger was entitled to monetary relief for activities that took place prior to the Federal Court of Appeal's judgement and at a time when Travelway held trademark registrations for the impugned marks.

For Travelway to have been financially responsible for the past, the court would have had to declare its registrations void ab initio (meaning Travelway's registrations were and always have been invalid and should have never been registrable).

This was not the case. Travelway held valid trademark registrations until the Federal Court of Appeal found them invalid (albeit indirectly); therefore, it was entitled to the benefit of section 19 of the Trademarks Act prior to that date.[i] As the Disappearing S Mark and the Missing S Mark were deemed to be permissible variants of the Travelway marks, section 19 protection extends to them as well. Therefore, the Federal Court ruled Travelway was not held liable to pay compensation attributable to the period during which its registrations were in effect.

The Federal Court's findings reinforce the premise that a valid trademark registration is an absolute defence, as defendants cannot be held liable for damages stemming from infringement or passing off occurring during the period when their trademarks registrations are in effect. Therefore, simply obtaining trademark expungement is not sufficient for relief by way of recovery of damages or profits. Such expungement must be on grounds of invalidity ab initio.