The specialized skills of the most successful leaders adapt and evolve in tune  with the needs of their business environment.

Remember when Tim Cook was chosen as the CEO for Apple? There were  many questions about why you would prefer a supply chain expert for the  head of Apple? Well, continuously since then, he has shown why and at this  point in history, the impact of his genius in supply chain strategy is unrivaled  Before that, possessing sales skills were critical to the success of the  enterprise and its leader, and before that, superior operational skills were essential. It does not take a rocket scientist to connect the dots – successful  leadership must respond to the requirement of evolving specialization, which is driven for the most part by the most significant underlying challenges of  the times.

We would suggest that the declining level of engagement by the workforce has rapidly become entrenched as the most critical challenge of our time in  all areas of the economy. Some of the underlying reasons for this  disengagement and why it will require a very different leadership to resolve  include:

The above issues will require successful leaders to possess strong human  capital management ("HCM") skills to address these issues. How the  following abilities are deployed will be as equally important to successful  leaders as having them: 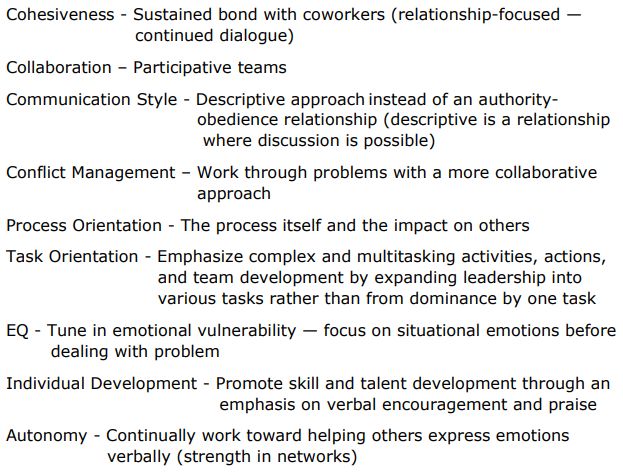 This newly evolving skill set that successful leaders urgently require has and  will impact the gender makeup of the leadership group in most industries. This premise is not based on hope or wishful thinking. Instead, on the  science of the brain in general and the differences in the attributes of male  and female brains, which continues to grow and evolve.

However, a report from December 2019 provided the following example: "For instance, males and females on average don't differ much on  extraversion. However, at the narrow level, you can see that males on  average are more assertive (an aspect of extraversion) whereas females on  average are more sociable and friendly (another aspect of extraversion)." So well there is nothing to indicate a difference in intellectual performance; there are differences in behavioural patterns including:

These differences in thought patterns generally result (not always, of  course) in a more in-depth possession and fluid and effective use of the HCM  skills identified earlier in this article.

A real example of this difference is in how the genders would deal with  diversity and inclusion. First, it is essential to understand that leadership  stating that the entity strongly supports diversity and inclusion and has  policies to be followed neither ensures their execution as intended nor  matches peoples' experience.

Muhtar Kent (former chairman and chief executive officer of The Coca-Cola)  perhaps said it best when he shared that "we need to make everyone more  aware of the benefits of empowering women. Then I think we can succeed  faster. Because it's one thing to achieve success, and another to repeat  success. That's the job of a leader. Promoting women leadership and  creating a more level playing field is a huge enabler to repeat success."

1 Leadership and the Sexes: Using Gender Science to Create Success in Business (n.d.).

2 Leadership and the Sexes: Using Gender Science to Create Success in Business (n.d.).

3 Leadership and the Sexes: Using Gender Science to Create Success in Business (n.d.).

4 Leadership and the Sexes: Using Gender Science to Create Success in Business (n.d.).

5 Leadership and the Sexes: Using Gender Science to Create Success in Business (n.d.).

6 Leadership and the Sexes: Using Gender Science to Create Success in Business (n.d.).