Canada: Canadian Court Of Appeal Has Something To Say On Obviousness: Critical Of Rigid Tests And Using A Solution-Based Identification Of The Inventive Concept That Excludes Serendipitous Discoveries Means Atazanavir Salt Obvious

by Aird & Berlis LLP and Kitt Sinden
Aird & Berlis LLP
Your LinkedIn Connections
with the authors
To print this article, all you need is to be registered or login on Mondaq.com.

The Federal Court of Appeal ("FCA") recently affirmed a Federal Court ("FC") finding that an antiviral salt was obvious, although based on different reasoning1. The FCA provided a detailed analysis of the "inventive concept" ("IC"), although it is arguably still unclear as to when/why it is appropriate to use an elevated IC as opposed to a minimal IC. It appears the IC in this case arose out of the patent disclosure (and the "solution taught") and expert evidence as to common knowledge, although the FCA spends very little time reviewing the former. The decision certainly underscores the importance of the IC – with an elevated IC generally being more difficult to render obvious. At the same time, the FCA expresses its dissatisfaction with the varying judicial interpretations of the IC. The court advocates that there really is no new definition of obviousness with this term. Although not required on the facts before it, the FCA also conducted an intensive critical review of the apparent "over-use" of the "obvious to try" test – stressing that the Supreme Court of Canada ("SCC")2 was clear that such a test "be approached cautiously" as only one factor to consider.

The appellate decision is interesting for several reasons.

Firstly, the FCA spends a great deal of time going through the intricacies of the FC's analysis of the "inventive concept" and application of the "obvious to try" test. Clearly, both topics were of interest to the appellate court.

Secondly, the FCA found an extricable error of law regarding the FC's alleged improper focus on the "properties" of the atazanavir salt in setting the IC, as opposed to the "solution" of the patent. The FCA then found that the IC was actually one of the three "properties" initially identified by the FC (better bioavailability), and concluded such a solution obvious.

Thirdly, the FCA found that improved bioavailability was already understood from simply the prior art reference to pharmaceutically-acceptable atazanavir salts – there was "no difference" between the prior art point and the IC point. In any event, any difference was obvious based on mere common general knowledge, without even using the SCC's "obvious to try" test. The FCA went on to find the salt was also obvious to try in any event, despite repeatedly stressing that "obvious to try" was not necessary to apply in this case. In fact, the FCA emphasized that "obvious to try" should not be used in many instances. Arguably, this latter finding may be a "plus" for brand names – although it did not assist Bristol Myers Squibb ("BMS") in this case. Traditionally, the "obvious to try" test has been considered a potential tool for impeachers to use to assist with invalidating a patent for obviousness.

In its articulation of the IC, the FCA quickly found that the FC used the wrong definition of the IC, and instead of looking at properties of the salt, should have focused on "the solution taught by the patent" [75]. A comparison of the FC and FCA inventive concept is useful: 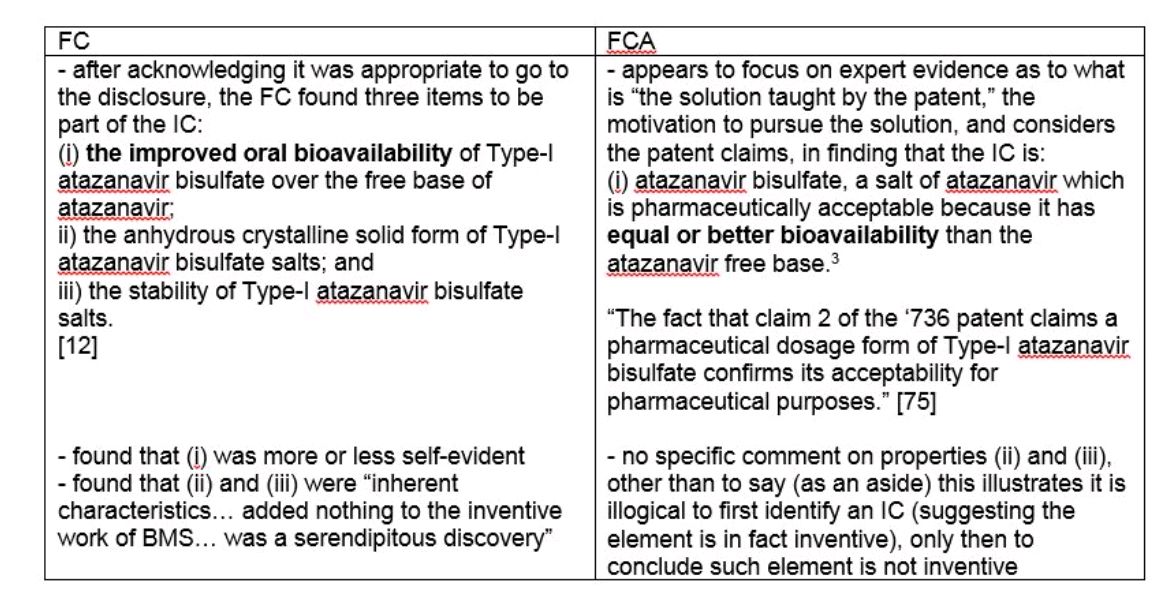 The FCA appears to equate the IC and claims construction, in its useful description of the obviousness analysis, as evaluating the distance between two key "points":

"[T]he obviousness analysis asks whether the distance between two points in the development of the art can be bridged by the Skilled Person using only the common general knowledge available to such a person. If so, it is obvious. The first of those points is the state of the prior art at the relevant date. References in the jurisprudence to "the inventive concept", "the solution taught by the patent", "what is claimed" or simply "the invention" are attempts to define the second point." [emphasis added]

At the same time, the claims were only briefly discussed early on by the FCA reasons as "background," at which point the FCA acknowledges (and ultimately refuses) Teva's arguments that the IC is merely the claimed compound. This refusal may be difficult to reconcile with the FCA's later analysis that the IC is actually the same as "what is claimed." Really, this may illustrate the continuing complexity of identifying the IC. In this case, it appears that the IC is what is claimed, having regard to a purposive review of the solutions/problems discussed in the disclosure.

Regarding the obviousness analysis (including use of the obvious-to-try approach), BMS wanted a hard and fast rule – "if you can't predict each IC property before making it, the invention will not be obvious to try." The FCA denied such a rigid rule. The FCA stated that any such categorical approach to obviousness was the "antithesis" of the SCC's obviousness approach.

Certainly, there were several "bad facts" for BMS in this case: it was routine to do a salt screen; there was an expectation that salts would increase solubility which would tend to/generally (though not necessarily) increase bioavailability; and BMS made the salt on its very first day of drug development, and then used routine techniques to characterize the salt. The FCA also found that BMS' inventors were not "working at a higher level" than the skilled person.

Whether one calls it a property or a solution, it is arguably still unclear exactly how to define the IC, or if this is even necessary. The FCA notes that the UK courts (who coined the term) caution that if there is disagreement regarding the IC, one should simply forget the IC and work on "the features of the claim," otherwise there may be an "unnecessary satellite debate." Canadian jurisprudence suggests such debates are the norm. The FCA was also concerned by the "varying interpretations" of the IC by Canadian courts, in coming to its ultimate conclusion that there really has been no change in the definition of obviousness by the introduction of the term IC. Instead, we are to just focus on "Point 2" like we did at the Beloit4 1986 stage (i.e., before the IC and "obvious to try" entered Canadian jurisprudence). Yet, despite being critical of the usefulness of the IC, the FCA went ahead and identified the IC in this case, which was determinative of the obviousness of BMS' salt.

Unfortunately, the FCA does not provide much guidance on articulating the IC/"Point 2," presumably because it does not want to create any more of the very "rigid tests" that it criticizes in its decision.5 The bioavailability "solution", as found by the FCA, was not specifically claimed but reflected in claim 2 of BMS'   patent, directed at a pharmaceutical form. Although not discussed by the FCA, under the Field of Invention section, the BMS' patent states:

Ostensibly, other insignificant properties were not part of the main solution to which the patent was directed, and as such, excluded from the IC. Although the FCA was loath to give any more rigid rules, particularly on the nebulous concept of obviousness, arguably the use of tests (even if not definitive/applicable every time), provide some clarity/structure to guide both parties and courts alike.

Ironically (and bad for BMS), it appears that the common understanding of the day7 was also identified as the IC, necessitating an obviousness finding. A few questions may arise from this:

It is not immediately clear as to why the FCA decided to comment on the apparent over-use of the "obvious to try" test. The FCA may be expressing an underlying (and certainly unstated) concern that this test is being used too often to invalidate patents. Ironically, in this case, BMS appeared to want to use the test in order to support its argument that its case was on all fours with Sanofi SCC (where the SCC found the compound not obvious using the obvious to try test).

Significantly, one would have thought that salt selection would clearly be within the ambit of the "obvious to try" realm, given the practical realties of the salt selection process. The SCC says the test "might" (as emphasized repeatedly by the FCA) be acceptable in the "pharmaceutical industry where advances are often won by experimentation". Again, the underlying/unstated view of the FCA may be that any new rigid rules are inappropriate, because really the test for obviousness has not changed.

The FCA characterizes the "obvious to try" test endorsed by the SCC as "the innovative feature" of the Sanofi SCC decision. The FCA then reviews the history of the obviousness test (including the standard Beloit 1986 definition), and the SCC's concern with rigid application of the Beloit definition to all types of claims, as rigid non-statutory rules are inappropriate. The FCA repeats the SCC's warning that the obvious to try test should be approached cautiously, as only one factor, and is not mandatory in Canada; there is no single approach. The FCA instructs (as it has in earlier non-pharmaceutical cases) that there be a "flexible, expansive, and fact driven inquiry." The FCA notes that the old Beloit 1986 test remains possible, but just don't apply it out of context. This may be one of the first pronouncements by the FCA to go back full circle to using Beloit for the obviousness analysis.8

1 Bristol Myers Squibb v Teva 2017 FCA 76, affirming 2016 FC 580 (Mactavish) [NOC proceeding]. As Teva has now received its Notice of Compliance, there will be no appeal to the SCC.

3 Interestingly, the FCA at paragraph 1, in generally summarizing BMS' salt patent, uses the same type of description as it later applies for the IC: "[1] ...[BMS]... filed a patent application for Type-I atazanavir bisulfate, a salt of atazanavir whose superior bioavailability makes it useful in the formulation of an oral dosage of atazanavir." [emphasis added]

5 As noted by both the FC and FCA, the Sanofi SCC case looked to the disclosure to determine the IC of the selected enantiomer compound as claimed, and included properties that were not discussed in the claims. Of course, the fact that the SCC was considering a selection patent (which by definition permits a selected compound to be claimed where there is a special/unexpected property or advantage that was not present in the genus), may make such comparisons difficult. Notably, before the FC, Teva provided examples where Canadian courts had not gone to the disclosure to identify the IC, with the result that the FC found that there were no hard and fast rules (an aversion to strict rules that was echoed by the FCA).

7 It was accepted that the skilled person would make salts of poorly soluble compounds to increase solubility and bioavailability.

8 The FCA has certainly continued to refer to Beloit 1986 in their obviousness analysis, but has generally then acknowledged refinement by the framework provided in Sanofi SCC (for example: Bridgeview Manufacturing v 931409 Alberta 2010 FCA 188).