Canadian oil and gas companies are being squeezed by the double pressure of commodity prices and pressure to reduce emissions. While Justin Trudeau's government is looking to support the oil industry during the longest downturn in prices in recent history, it also has to meet the challenge of lowering Canada's emissions output to satisfy environmental concerns, which could come at a high cost to producers.

Uncertainty about long-term global supply and demand patterns for oil and gas and their impact on oil prices are both a challenge and an opportunity for dealmakers.

The survey results show that respondents expect the Canadian energy M&A market in 2017 to be more robust than in the previous year. Buyers may be enticed by a price deck above $50 per barrel, with both Brent crude and WTI largely buoyant since December, and they may also be ready to meet the seller's price expectations informed by a longer than expected commodity price decline but tempered by a strong reluctance to part with quality assets in a downturn.

At the same time, Canada is adjusting to a changing world in which environmental and climate change policy has taken centre stage. Embracing this change is also expected to foster new technologies and bring efficiency to the industry. Indeed, technology acquisition to create cost savings is one of the most frequently cited factors to drive Canadian oil and gas M&A in 2017. Domestic consolidation and inbound buyer interest are equally important trends driving M&A activity, according to respondents.

Agreements with Indigenous peoples in Canada also continue to play an integral role in planning the country's future energy mix. This is particularly true for new midstream infrastructure for exports, and much of the progress of Pacific-side LNG projects will also depend on these negotiations. Geology, infrastructure and getting product to market are all essential factors affecting companies looking to compete—or, as in some cases, survive

Some of the most pertinent findings from our survey include the following:

The majority of respondents anticipate an increase in oil and gas M&A in Canada, as seen in Chart 1, which at 67% is slightly more optimistic than in our 2015 survey at 62%. Upstream companies with enough funds, for example, may look to grow through acquiring strategic producing assets rather than investing in costly exploration activities.

"As the oil and gas industry transforms itself to become profitable at lower price levels, there will be an increased focus on M&A over the next 12 months," says the managing director of a Canadian investment bank.

However, one-quarter of respondents believe the market will remain stagnant due to a persistent buyer-seller valuation gap, both globally as well as in Canada, as many sellers are unwilling to dispose of high-quality assets in a lower commodity price environment.

The manager of another investment bank points out that the currency spread may nevertheless be a perk for inbound buyers. "The cost of investing in Canada has been significantly reduced because of the devaluation of the Canadian dollar. This will boost M&A in Canada in the oil sector," he says.

More than half of respondents (54%) believe the value of M&A transactions in Canada will also increase over the next 12 months (Chart 2). Some respondents pointed to increased private equity activity and foreign buyers in the oil patch as drivers. "Private equity firms are expected to have more interest in oil and gas M&A transactions. Compared to the past three years, this should become particularly visible in the junior exploration and production space," says the managing director of an investment bank.

E&Ps on the acquisition trail 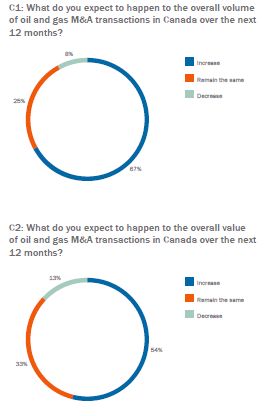 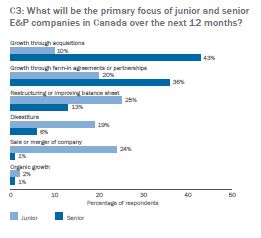 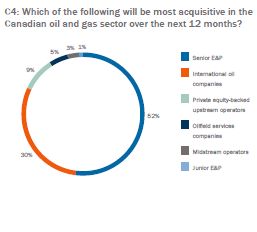 Similarly, Chart 4 details that 52% expect senior E&P companies to be the most active buyer group. Many E&P companies have been able to maintain solid balance sheets and are therefore able to more successfully tap lenders for acquisitions and take on new debt. At a price deck of US$45-50 bbl, the industry seems to have stabilized—if the price holds, debt/equity markets may open in 2017. Until that happens, banks continue to look to safe havens— sustainable, quality players with quality assets and firm balance sheets.

Seventy-two percent of respondents expect an increase in divestments in the sector. "Low oil prices stir shareholder activism and will accelerate the number of companies looking to divest their business or a part of their business in response to the building pressure," says the CFO and VP of finance of a Canadian junior E&P company.

Besides having to address debt obligations and shareholder concerns, one of the drivers behind divestments is to raise funds to finance acquisitions and capital spending. For example, following Enbridge's bid for Spectra

Energy in September, Enbridge announced more than US$1.5bn in planned divestments to maintain financing flexibility and focus on its core business, which includes the divestment of liquids pipeline assets owned by Enbridge Income Fund Holdings to Tundra Energy Marketing for $814m.

Unsurprisingly, the majority of respondents (79%) are looking to new technology to increase cost savings, as seen in Chart 6. Digitalization in the E&P process is making big strides as companies seek to maximize efficiency and bend the cost curve. This is most often achieved by bringing new technology and intellectual property in-house through acquisitions. Among deals involving the bigger North American oilfield services players was the acquisition by US giant Schlumberger of the Canadian coiled tubing segment of Xtreme Drilling and Coil Services, which designs, builds and operates a fleet of high-specification drilling equipment, and has activities in Canada, the US and Saudi Arabia. The deal will allow Schlumberger to provide more cost-efficient services.

In addition, technologies that achieve a reduction in the emissions footprint of the natural resource extraction process will become desirable assets for producers and midstream companies.

One corporate CFO explains: "To comply with various environmental and other regulatory requirements, companies are trying to find new ways to reduce costs and improve efficiency at the same time. Technological advancement is needed and companies have realized that and will focus on technological acquisitions to create cost savings."

It is also worth noting that 76% of respondents anticipate that distressed situations will continue to drive deals (Chart 6). However, as the price of oil has hovered above US$40/bbl since April 2016, distress-driven asset sales may have stalled with lenders, allowing producers to catch their breath after the brutal price drop in late 2015. 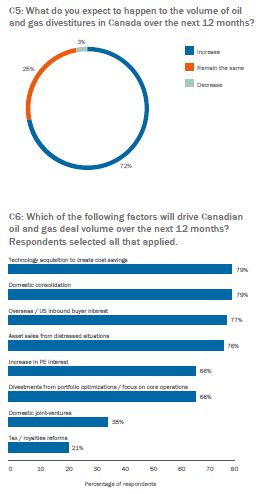