Wesfarmers, one of the biggest conglomerates in Australia, saw concern from its shareholders with a negative response during the recent 2019 Annual General Meeting (AGM) that was held last November 14, 2019.

Although all resolutions were passed, there was a large number of shareholders that voted against the adoption of the remuneration report, resulting in a 21.45 percent disapproval. One of the biggest causes of the pessimistic response from shareholders was due to proxy advisor ISS advising investors to go against the remuneration report because of an "excessive" compensation plan.

Although Wesfarmers' demerger from Coles supermarket resulted in a 360 percent increase in after-tax profit to AUD 5.5 billion, the company will neither give incentive nor penalize its executives 1.

Shareholders were concerned over the pay for both Chief Executive Officer (CEO) Robert Scott and Independent Chairman Michael Chaney 2. Mr. Scott has received over AUD 4 million in total realized pay and Mr. Chaney has received AUD 780,000 in total compensation, which ISS claims is higher than its industry peers.

According to our CGLytics analysis, Wesfarmers has a higher CEO total realized pay over three years than its three-year increase in total shareholder return (TSR), when compared against its country and industry peers.

This misalignment of the CEO pay compared to company performance may have been the cause of the company almost undergoing a first-strike. A first-strike occurs when 25 percent of shareholders vote against the adoption of the remuneration report and the company would need to either amend or justify its remuneration policies before the next AGM 3. 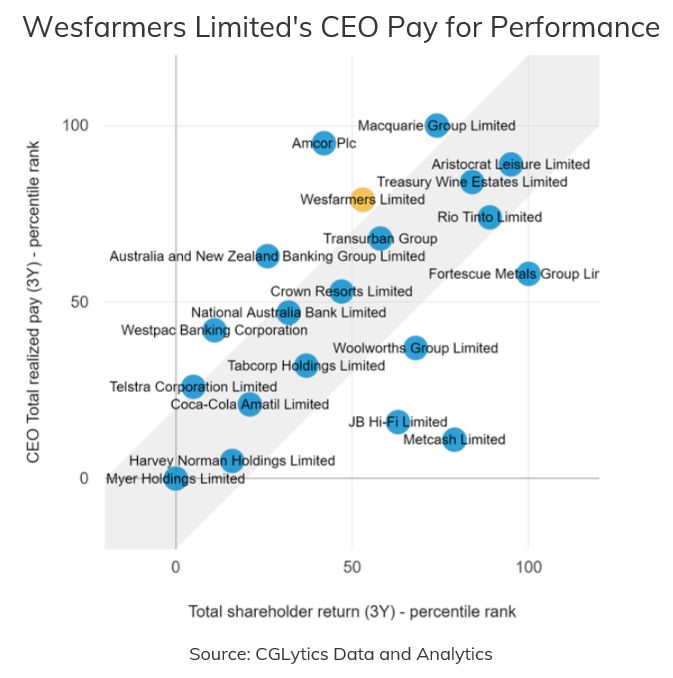 Not only was there concern over the CEO pay for Wesfarmers, but the ambiguous changes in awards policies 4. This was also seen as an issue for other proxy firms such as Glass Lewis and the Australian Shareholders' Association (ASA).

What is the KEEPP bonus scheme?

The 2016 and 2017 Key Executive Equity Performance Plan (KEEPP) bonus had been cancelled following the demerger of Coles supermarket, but a bonus will be rewarded with the same principles as KEEPP, however with different performance conditions.

Because of the demerger in 2018, the company has removed the performance condition on absolute ROE as it may have an impact on the targets of executives. The 2018 KEEPP allocation for the CEO and CFO is as follows: 60 percent weighting on the Wesfarmers' relative TSR against the S&P/ASX100 Index, 20 percent weighting on Wesfarmers' portfolio management and investment outcomes and 20 percent weighting on strategic measures. However, the company was not able to be fully transparent and clear in its disclosure of strategic measures and investment outcomes, only stating the improvement of data analytics and better progress in gender balance.

Wesfarmers underpays due to complications in payroll

After the release of the 2019 AGM results, another scandal arose when it came to light that Wesfarmers had underpaid up to 6,000 current and former employees of its industrial division, resulting in AUD 15 million or more in underpayments 5. The company stated that its cause was due to a defect in a payroll system. The company plans to expedite the sending of payments into the banks of underpaid current and former employees before the end of 2019, but is hindered by the complication of its payroll system 67.

Companies not only link executive pay to performance, but more often than not, companies also link director pay to competency and expertise 8. With the current events that Wesfarmers has experienced, it is suggested that the company would benefit from a board that can guide it towards its strategic direction, mitigate risk and oversee company performance.

According to our analysis (performend using the CGLytics application), Wesfarmers' board has strengths in the areas of 'advisory' and 'finance'. Wesfarmers recent acquisition of the Catch Group in 2019 (an e-commerce company that runs Catch.com.au, Mumgo, Grocery Run and Brands Exclusive), should see greater skills and expertise added in the area of 'technology', which is currently very low. 'Governance' experience, to spot and mitigate risks, is also worth looking at to ensure issues are resolved smoothly in the future.

ARTICLE TAGS
Australia Corporate/Commercial Law Corporate and Company Law Shareholders
POPULAR ARTICLES ON: Corporate/Commercial Law from Australia
The $50 million dollar reason to review your contracts
LegalVision
Outlines proposed changes, their implications & how they will affect your rights & responsibilities in commercial contracts.
Changes to the Australian Consumer Law (ACL): Businesses risk $50M fines for each unfair contract term in their standard form agreements
Holman Webb
Businesses should ensure that their contracts do not contain terms that could infringe the UCT regime in the ACL.
Builders beware: how amendments to the unfair contract terms regime will affect the construction industry
Corrs Chambers Westgarth
What contracts will be subject to the amended UCT law? When is a contract term 'unfair'? Consequences of relying on unfair terms?
Unfair contract terms – what are they and when do they apply?
Bartier Perry
If a Court or Tribunal finds that a term in a standard form contract is unfair, the term will be declared null and void.
Penalties In Loan Contracts
Vincent Young
In the current inflationary market, lenders are changing the terms on which they are willing to lend money to both individuals and businesses. For most borrowers, the key variable is interest rates.
No Director ID? Act before 30 November!
Clifford Gouldson Lawyers
Director identification numbers will be mandatory for ALL directors, regardless of when they first became a director.
FREE News Alerts
Sign Up for our free News Alerts - All the latest articles on your chosen topics condensed into a free bi-weekly email.
Register For News Alerts
Article Tags
Australia Corporate/Commercial Law Corporate and Company Law Shareholders
Similar Articles
Powered by mondaq AI
MATCH
56%
Westpac: The Issues, Regulators And Lessons To Be Learnt CGLytics
50%
Blue Sky Downfall CGLytics
49%
Harvey Norman AGM; Strike 2 In The Making? CGLytics
Related Articles
The Third Wheel Podcast Series: ESG In Australia Episode 23 – Keeping The Focus On "S" (Video) Herbert Smith Freehills
The Third Wheel Podcast Series: ESG In Australia Episode 22 – Unlocking ESG Investment In Australia (Podcast) Herbert Smith Freehills
Director Penalty Regime Vincent Young
How to maximise your client's business sale Worrells
What the 30 November 2022 deadline for Director ID applications means for resigned company directors Holding Redlich
Mondaq Webinars
Global Offshore Fintech Focus on Crypto: Laws, Regulations and Trends [REPLAY]
Carey Olsen
A Comparative Approach to Professional Secrecy and Attorney-Client Privilege in Criminal Proceedings [REPLAY]
Monfrini Bitton Klein
More Webinars
Comparative Guides
Alternative Investment Funds
Anti-Corruption & Bribery
Construction
Cybersecurity
Data Privacy
More Guides
Mondaq Advice Centres
Global
Trademarks in SAARC Countries
More MACs
Upcoming Events
Mondaq Social Media