Australia: Tales from the crypt: Digging around in patent class A62B33

Patent classification titles are usually pretty boring, but occasionally one will jump out at you and fire up your imagination. A62B33 is one of those. Its full title is Devices for allowing seemingly-dead persons to escape or draw attention; Breathing apparatus for accidentally buried person.

See what I mean? Right now your mind is conjuring up images such as: 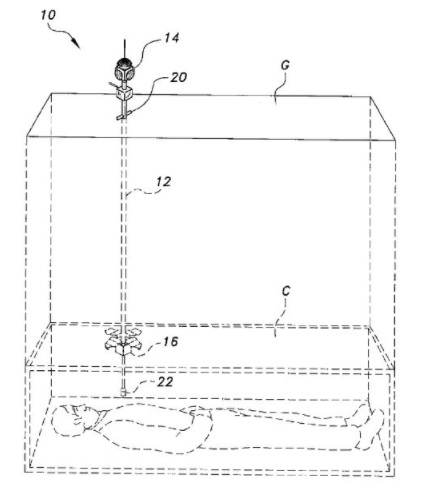 This one isn't even that old. It dates back to 2013, and it's not even the most recent disclosure of this type.

Generally though, devices such as these have a very long history with the first recorded back in the late 18th century. The earliest patent I can find dates to about one hundred years later, in 1892, but it's just one of a flurry of patents in this area over the next decade or so.

It's a simple mechanism comprising a bush of feathers in a tube, protruding above the ground, and triggered essentially by the seemingly dead person attempting to sit up, and as such bumping their head, releasing the bush of feathers out of the tube to be noticed by eagle-eyed cemetery goers. It's not all bad though as the point at which one bumps their head has been thoughtfully padded. An egg on your head is probably the least of your worries in that situation.

If we switch for a moment to filings in the class over time, you can see three distinct periods: from the late 1800s to the mid 1960s, from there to the mid 1990s, and from there to today. The number of families filed within these periods steps up four-fold each time, so is this by necessity or technological advance?

If I was to generalise regarding the subject matter within these three distinct periods, I would have to say that the first period corresponds with what are known as safety coffins. These are coffins with mechanical mechanisms that allow someone to signal that they are indeed alive, and breathe while waiting for that signal to be seen. Here are a few more examples: US500072, GB191006409 and FR1065868.

The second period would appear to coincide with the rise of electronics and personal devices. There is also a move away from safety coffins, and towards buried persons of other types such as avalanche or landslide victims or lost scuba divers. Advancements in the field of electronics mean beacons carried by skiers or mountaineers allow a person to be located by rescuers easily when there is no visible sign of their presence, but other personal devices still rely upon a mechanical device in the same way a safety coffin would have. Gas canisters with balloons on long ropes can be activated in the event of an avalanche to expand the balloon to provide a visible signal to rescuers. The balloons also serve as possible buoyancy aids while you're sliding down the mountain, leaving you close to the surface, or as possible snow free refuge and air providers if they end up close to the person and can be deflated. Examples in this group include CH450499, US3786406, US3911913 and US5490501.

The third period still appears to electronics driven, although now the devices are getting smaller, more sophisticated, and reliant upon communication networks, even those being filed in the safety coffin space. There is also a focus on wearables such as jackets and helmets, with more features such as air bags, an air supply or illumination, providing more time before rescue. Here are some examples from this period: DE19957408, US2003208890, US2009121930, and US2018326233.

I've drawn the line for the most recent period as flat, but really filings are trending positively. Much more than the previous two periods did. One of the first things to do is see where these patent families are originating from. As Chinese originating applications are surging in general, I looked to see if that is the case here, and it's not. No one country appears to stand out. Some of the higher filing jurisdictions are the European Patent Office, the United States, Germany and China.

The highest of those is the European Patent Office, and the majority subject matter is wearable airbag systems, so perhaps that's where the trend has been in recent years.

Lastly, the award for the ultimate in 'on trend', or serendipity or opportunism, has to go to the applicant for DE102018005497.

As you can see it's a rescue system for people trapped in caves enclosed by water. Sound familiar? It was filed just one day after the Tham Luang cave rescue in Thailand.

This patent class, A62B33, sounds funny, and early examples do look ridiculous these days, but today the subject matter is quite serious and along very different lines, which shows just how much a broadly titled, long forgotten class can change over time.