Australia: Obtaining evidence for use in foreign proceedings

by Jason Munstermann , John Kettle and David Wilton
McCullough Robertson
Your LinkedIn Connections
with the authors

How is evidence from a cooperating witness obtained in Australia?

Evidence should be taken in a manner that is consistent with the procedural and evidentiary rules of both the local jurisdiction and the Australian jurisdiction for which the evidence is required.

Can evidence be given by video or audio link?

Evidence can be taken by a witness located in Australia for a foreign proceeding by using video or audio link. The laws of most Australian jurisdictions do not prevent a person from voluntarily appearing in a foreign Court via video link without the involvement of Australian authorities.

Evidence obtained in Australia by compulsion for use in foreign proceedings

Orders may be obtained from Australian Courts to compel a person or corporation to give evidence, either orally or in writing, or produce documents for use in foreign proceedings. Typically such evidence is obtained under the Hague Evidence Convention, a bilateral treaty or diplomatic channels.

The Hague Evidence Convention applies only to 'civil or commercial matters' before a judicial authority. Evidence cannot be obtained under the Convention for use in criminal proceedings.

Provided that the matter involves a civil or commercial matter, a party may approach a Court in the country that is a signatory to the Convention (e.g. the US) to issue a 'Letter of Request' under the Convention for an Australian Court to obtain evidence.

Although the 'Letter of Request' will be issued by the foreign court (e.g. the US Court), in practice it will be prepared by the party applying to obtain the foreign evidence.

Issuing the 'Letter of Request'

The 'Letter of Request' can be issued to either:

Where the evidence is required urgently, it will therefore be necessary to nominate a local practitioner to commence proceedings in an Australian Court for orders giving effect to the 'Letter of Request'.

Principles that an Australian Court will apply when deciding whether to allow such an application include:

Upon a successful application the Australian Court may order the production of documents, the attendance of witnesses for examination and other means of evidence collection.

A diplomatic channel is generally used to transmit requests where there is no agreement or treaty in place between Australia and the foreign country. Requests are submitted to the Commonwealth Department of Foreign Affairs and Trade. There may be fees associated with the execution of the request. 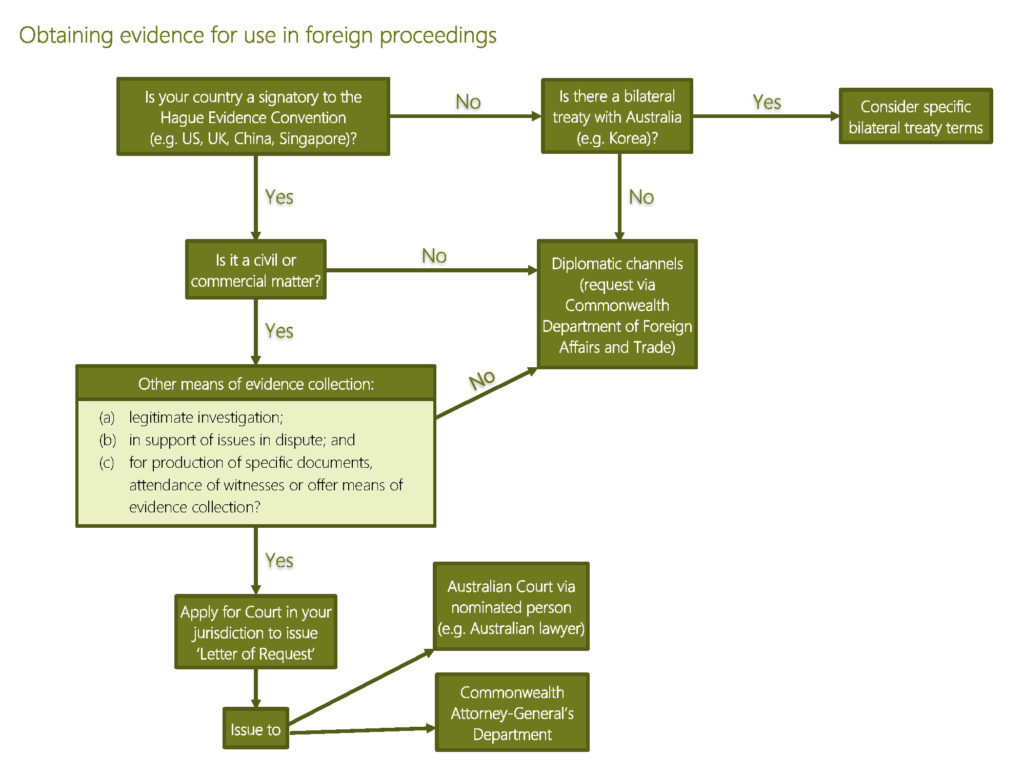