Worldwide: Settlements In Brief: Reduced Fine For Odebrecht And Deferred Prosecution For Tesco

Enforcement actions by criminal and supervisory authorities are settled regularly. In light of these developments, companies are advised to take appropriate measures. This month we once again highlight the 2016 settlement of Odebrecht and its petrochemical affiliate, Braskem. A US federal judge recently reduced Odebrecht's initial fine from USD 260 million to USD 93 million because of its alleged inability to pay. This means that the combined Odebrecht/Braskem settlement is no longer ranked fifth in the top ten Foreign Corrupt Practices Act enforcement list. We also highlight the recent Tesco Stores Limited settlement with the Serious Fraud Office (SFO). The SFO entered into a Deferred Prosecution Agreement (DPA) with the Tesco subsidiary in connection with false accounting between February and September 2014. Tesco Stores is the second company (after Rolls-Royce) to obtain a DPA despite allegedly failing to self-report the misconduct to the SFO.

As discussed in the February 2017 In context, both the Brazilian construction company Odebrecht S.A. and its petrochemical affiliate, Braskem S.A. agreed to settle for a combined total amount of at least USD 3.5 billion in December 2016 to resolve FCPA allegations. Odebrecht, which operates in over 25 countries, had admitted paying approximately USD 800 million to Brazilian government officials and legislators in exchange for USD 3.34 billion in ill-gotten benefits. For over a decade, Odebrecht and its co-conspirators allegedly engaged in a secret internal financial scheme designed to bribe government officials, their representatives and political parties in more than 12 countries. This resulted in violations of US anti-bribery rules as well as books and records provisions. Odebrecht originally agreed to pay global criminal penalties of at least USD 2.6 billion, with 10% of that amount (USD 260 million) being payed to the DOJ. This amount, combined with Braskem's share (criminal and civil penalties) of USD 159.8 million, resulted (for a short period) in a fifth place ranking in the top ten list of FCPA enforcement actions. However, according to the DOJ, the final amount of the settlement with Odebrecht would be determined based on an analysis of their ability to pay.

In order to do that, the US and Brazilian authorities agreed, as part of the plea agreement, to carry out an independent analysis to verify Odebrecht's representation that it was unable to pay USD 2.6 billion. In the resulting sentencing memorandum of 11 April 2017, the DOJ requested the Court to approve a lower penalty than originally proposed based on the DOJ's determination that Odebrecht was unable to pay. According to the DOJ, Odebrecht can pay USD 93 million to the US authorities, and the proposed sentence is appropriate given the nature and circumstances of the offence and Odebrecht's history and characteristics. This proposed sentence became final on 17 April 2017 when a federal judge in Brooklyn ordered that the US share of Odebrecht's penalty will be USD 93 million instead of USD 260 million.

With the Odebrecht/Braskem settlement removed from the top ten list, the Snamprogetti Netherlands B.V. / ENI S.p.A settlement is back at number ten. In a 2010 FCPA resolution, the Dutch subsidiary and Italian parent paid a combined USD 365 million. Below is the updated top ten FCPA enforcement actions of all time (click to enlarge): 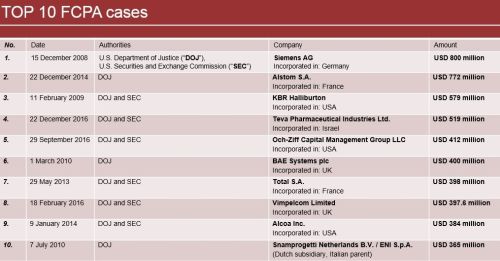 The chart above shows that the ability-to-pay defence can be relevant in certain FCPA cases. However, Odebrecht is among a small number of companies to have its FCPA penalty reduced on this ground; other examples are Innospec and Nordam Group.

In March 2010, specialty chemical maker Innospec pled guilty to FCPA and other wrongdoing based on conduct in Iraq and Indonesia and agreed to resolve a DOJ and SEC enforcement action by paying USD 25.3 million. The total amount of fines and penalties could have been much higher, as the minimum amount under US Sentencing Guidelines was USD 101.5 million. However, Innospec received a pass on approximately USD 135 million in fines and penalties based on its claimed inability to pay.

The Nordam Group enforcement action of 2012 concerned a non-prosecution agreement where the provider of aircraft maintenance, repair and overhaul services paid a USD 2 million penalty to resolve FCPA violations concerning business conduct in China. In the non-prosecution agreement, the DOJ agreed that a fine – below the standard range according to the US Sentencing Guidelines – was appropriate because it was clear that a fine exceeding USD 2 million would substantially jeopardise the company's continued viability.

The SFO entered into a DPA on 10 April 2017 with Tesco Stores Limited (a Tesco subsidiary). A DPA under UK law is an agreement reached between a prosecutor and a company which could otherwise be prosecuted, under the supervision of a judge. The agreement allows a prosecution to be suspended for a defined period provided that the company meets a number of specific conditions. DPAs can be used for fraud, bribery and other economic crime. They apply to companies, never to individuals.

The DPA in the Tesco case related, allegedly, to false accounting by Tesco Stores between February 2014 and September 2014. The SFO's investigation into Tesco started on 29 October 2014 after the company announced that it had overstated its accounts by GBP 250 million in August 2014. The company eventually adjusted this amount to GBP 326 million. Under the terms of the DPA, Tesco Stores will pay GBP 129 million to resolve the SFO investigation, and will also pay the agency's full legal costs. An interesting detail in the Tesco case is that on the same day the agreement to enter into the DPA was made public, the Financial Conduct Authority (FCA) announced that Tesco had agreed with the FCA that it had committed market abuse. The FCA did not impose a fine as part of the settlement. Instead, the FCA required Tesco and Tesco Stores to pay compensation totalling GBP 85 million to its shareholders.

A notable detail is that, according to multiple news outlets (unfortunately we have no insight into the details and considerations of the Tesco Stores DPA, as it is subject to reporting restrictions pending the conclusion of the trial of three former employees in September 2017), both Rolls Royce and Tesco Stores have obtained a DPA with the SFO despite not self-reporting the misconduct. Nevertheless, even with no insight into the details of Tesco's DPA, it is conceivable that Tesco Stores, just like Rolls Royce, relied on "extraordinary cooperation" to secure the DPA. This is based on the insight we have into the FCA's arguments; it is worth noting the similarity of the FCA's acknowledgment of Tesco's and Tesco Stores' cooperation to that of the judge in the Rolls-Royce DPA. The Final Notice of the FCA shows the coordination between the SFO and the FCA, stating that Tesco's DPA related to "substantially similar conduct by Tesco Stores Limited to that described in this Final Notice" and the FCA twice describes the level cooperation shown as being "exemplary."

DPAs were introduced in the UK on 24 February 2014. The DPA with Tesco Stores is the fourth DPA in the UK since then. The first DPA the SFO reached was with Standard Bank PLC (2015). The second was with a company currently referred to as XYZ (2016) due to ongoing related legal proceedings. In our In context article of 13 February 2017 we discussed the third DPA, which took place in January 2017: Rolls Royce.

In the previous DPAs with Standard Bank and XYZ, the SFO emphasised that it is highly important that companies self-report. The Crown Court, in its Rolls Royce judgment, referred to Rolls-Royce's extensive and extraordinary cooperation and stated that in this case, this cooperation was decisive and sufficient for entering into the DPA. The SFO's Joint Head of bribery stated afterwards, "Self-reporting is not dead; far from it. It is still a key feature of the profile of a case suitable for resolution by DPA. The extent, and importantly, the quality of information that we have before a company engages is a significant factor." Although there only have been four DPAs in three years (with two of them announced in 2017), according to the SFO`s Joint Head of Bribery, we will continue to see more DPAs in the coming months. "For those that behave responsibly, this is the new normal," he said in his speech after the Rolls Royce case.

After the Rolls-Royce and Tesco Stores DPAs, we can cautiously conclude that self-reporting is important, although not decisive, but cooperation is absolutely key to the chances of obtaining a DPA.