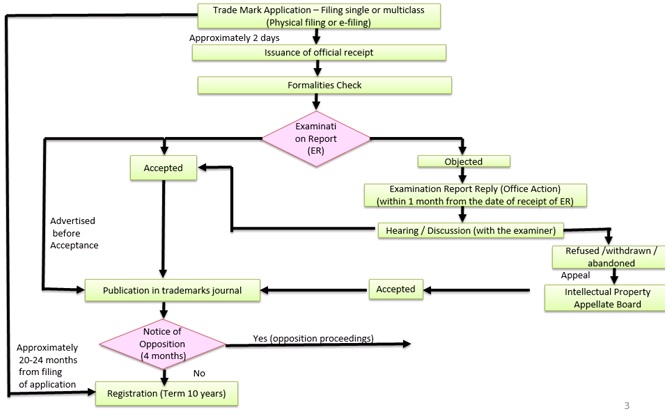 After an application is filed the same is then examined by the Registrar in accordance to the provisions of Trade Marks Act. If an objection to registration of the mark is raised, an official examination report will be issued by the Registrar within 3 months of filing depending on the backlog of Registry.

The Registrar may accept or refuse the application subject to the provisions of the Act. An application can be refused / objected by the Registrar on relative or absolute grounds:

(i) If the Trade mark is devoid of any distinctive character, that is to say, not capable of distinguishing the goods or services of one person from those of others;

(ii) If the Trade mark consists exclusively of the marks or indications which may serve in trade to designate the kind, quality, quantity, intended purpose, values, geographical origins or the time of productions of the goods or rendering of the service or other characteristics of the goods or services;

(iii) If the Trade mark consist exclusively of marks or indications which have become customary in current language or in the bona fide and established practices of the trade.

(iv) The Trade mark is of such nature so as to deceive the public or cause confusion;

(v) The mark comprises of any matter likely to hurt the religious susceptibilities of any class or section of the citizens of India;

(vi) The mark comprises or contains scandalous or obscene matter;

(vii) Use of the mark is prohibited under the Emblems and Names (Prevention of Improper Use) Act, 1950;

(viii) If the mark consists exclusively of:

However, a Trade mark which may be initially refused on absolute grounds can be registered if it acquires a distinctive character/ secondary significance as a result of extensive and continuous use

The relative grounds for refusal of a Trade mark are provided under Section 11 of the Trade mark Act, 1999 provides that:

• That a Trade mark cannot be registered if because of:

(i) Its identity with an earlier Trade mark and similarity of goods or services;

(ii) Its similarity to an earlier Trade mark and the identity or similarity of the goods and services, there is likelihood of confusion.

• That a Trade mark cannot be registered if or to the extent that, its use in India is liable to be prevented by virtue of any law.

Pursuant to the issuance of Examination Report/ office action, the applicant has to file an appropriate reply along with the required documents (if any) for overcoming the objections raised by the Registry against the Trade mark.

The Trade Marks Rules, 2002 provide for a period of 30 days from the date of receipt of the examination report for filing reply to the office action, or to request a hearing. In the absence of such response, the application shall be deemed to have been abandoned on the grounds of non-prosecution.

Publication in the Trade marks Journal

Take Note
This document is not intended to create an attorney-client relationship. You should not act or rely on any information in this document without first seeking legal advice. This material is intended for general information purposes only and does not constitute legal advice. If you have any specific questions on any legal matter, you should consult a professional legal services provider.
ADVICE CENTRE TAGS
India Trademark Opposition and Prosecution Grounds for Refusal
FREE News Alerts
Sign Up for our free News Alerts - All the latest articles on your chosen topics condensed into a free bi-weekly email.
Register For News Alerts
Practice Guide Tags
India Trademark Opposition and Prosecution Grounds for Refusal
Related Guides
Trade Mark Removal / Rectification in India
Opposition Proceedings in India
Meet More Experts