by André Koch
Dennemeyer Group
0 Liked this Article
To print this article, all you need is to be registered or login on Mondaq.com.

Once again, proof of use seems too high a hurdle for a world-famous trademark: A brief overview of the judgment of the General Court in Case T-307/17 - Adidas v EUIPO - Shoe Branding Europe.

It is hard to find somebody who has never worn a pair of sneakers or another garment featuring the famous "three stripes" at least once in his life. Everybody associates the symbol with Adidas. However, being famous does not exempt trademark owners from the strict requirements of providing evidence, if acquired distinctiveness of a trademark is being claimed as a defense in invalidity proceedings at the EUIPO.

How critical proof of use can be was recently shown in the "Big Mac" decision. This trend is now being continued, although in a different context, by the General Court decision T-307/17 of June 19, 2019. The General Court confirmed the invalidity of one of the Adidas European Union trademarks, a trademark consisting of three parallel stripes on a light background.

Context of the dispute

In 2013, Adidas AG filed an application for registration of an EU trademark with the European Union Intellectual Property Office (EUIPO) for clothing, footwear and headgear.

In the application for registration, the mark is identified as a figurative mark and corresponds to the following description: 'The mark consists of three parallel equidistant stripes of identical width, applied on the product in any direction.'

This trademark was registered in 2014. Shortly after that, the company, Shoe Branding Europe BVBA, applied for a declaration of invalidity of the mark. The Cancellation Division held the application to be invalid on the ground that the mark at issue was devoid of any distinctive character, both inherent and acquired through use. In its subsequent appeal, Adidas did not dispute the lack of inherent distinctiveness of the mark at issue, but they claimed that that mark had acquired distinctiveness through widespread use throughout the Union. In 2017 the Second Board of Appeal of EUIPO dismissed the appeal. 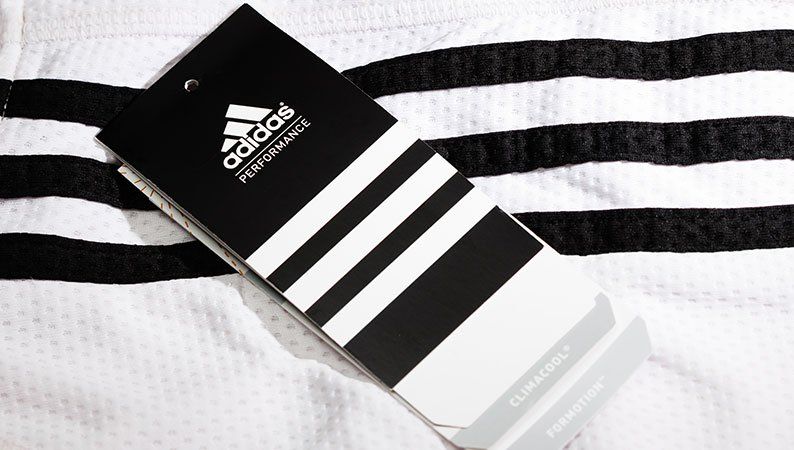 In the application for registration, the mark is identified as a figurative mark with the following description: 'The mark consists of three parallel equidistant stripes of identical width, applied on the product in any direction.'

The Board of Appeal stated:

On May 18, 2018, Adidas lodged an application with the General Court against the decision of the Board of Appeal. In support of its action, Adidas contended, that:

Essential subject-matter of the action and the decision

In its judgment of last week, the General Court dismissed both pleas, upheld the nullity decision and dismissed Adidas' action against the EUIPO decision. The Court could not be convinced of acquired distinctiveness, based on three considerations:

In the Court's view, the EUIPO was therefore right to reject much of the evidence Adidas submitted on the ground that it concerned other signs, in particular signs in which the color scheme was reversed (white stripes on a black background).

Adidas had submitted an 'enormous amount' of evidence, including market surveys, showing the mark at issue in the 'same' or 'broadly' the same dimensions as the registered form of that mark (over 12,000 pages). The Court found that much of the evidence submitted by Adidas could not be taken into account when assessing whether the mark had acquired distinctive character, as the trademark shown in the evidence was too different from the registered mark. Besides, there was no clear indication of how much each instance of the trademark shown had been used or which trademark the recognition in the market surveys related to, as the turnover figures provided did no distinguish singular products in an identifiable way.

An appeal, limited to points of law only, may be brought before the Court of Justice against the decision of the General Court within two months of notification of the decision. It remains to be seen whether Adidas will now appeal.

"This ruling is limited to this particular execution of the 3-Stripe mark and does not impact on the broad scope of protection that Adidas has on its well-known 3-Stripe mark in various forms in Europe. While we are disappointed with the decision, we are further evaluating it and are welcoming the useful guidance that the Court will give us for protecting our 3-Stripe mark applied to our products in whichever direction in the future," an Adidas spokesperson said.

What can we learn from this decision?

Adidas may bring an appeal before the Court of Justice within two months of notification of the decision, but it remains to be seen how the company will act.

Secondly, the decision of the court reaffirms the high standards set by the EUIPO for the proof of use of an EU trademark, be it proof of genuine use to fulfill the use requirement, be it evidence provided to demonstrate acquired distinctiveness.

Thirdly, this judgment shows how important it is to compile comprehensive documents at regular intervals. A compilation of evidence should take into account that:

It is true that this is very elaborate and can undoubtedly be very time-consuming. However, considering the economic interests involved with the existence or non-existence of a successful trademark, this effort should be worth it in most cases.

Trademark protection begins at the time of registration and includes above all a clean and comprehensive preservation of evidence for the use of a company's trademarks. Since the methods and means of providing genuine use of a trademark are unlimited, it is vital to refer to your counsel for more information and advice on how to sort the evidence and particularly how to present it to the EUIPO.